This WWII Navy pilot survived a 1,200-foot fall into the Pacific. Then he got back in the cockpit

Surprisingly, surviving a fall like Lt. j.g. Levenson’s is not unheard of. 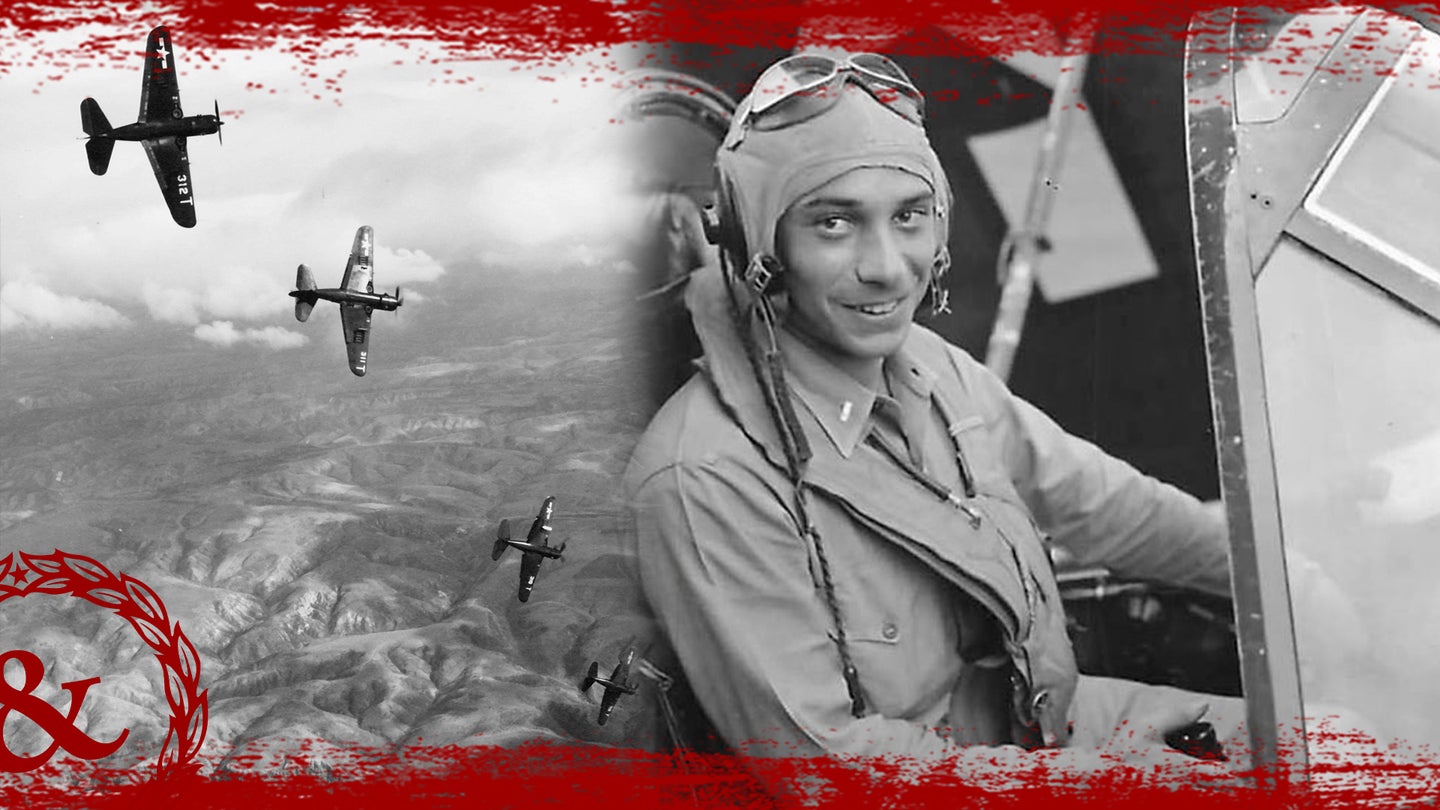 Navy Lt. j.g. Alvin E. Levenson was pulling out of a bombing run north of Saipan when he suddenly collided with a friendly aircraft. The 24-year-old aviator was now falling to the ground 1,200 feet below, but things were about to get worse: his parachute was not opening.

“The crash dazed me,” Levenson later told The Jewish Post of Indianapolis, Indiana, “And the next thing I knew I was falling, spinning around and around sideways like a top. I yanked the ripcord about twenty times and the chute broke out but failed to open. It flapped around me like a silk banner. Debris from the exploding planes was falling around.”

The Brooklyn, New York native spent the next few seconds thinking about his wife and the three-year-old son he’d never met, according to The Post. Levenson had been attending Brooklyn College when the U.S. entered World War II in December 1941. But a month after the Pearl Harbor attack, Levenson left school a semester short of graduating so he could join the Navy. He flew about 50 combat missions in Curtiss SB2C Helldiver dive bombers with Bombing Squadron 98, detachment B from the aircraft carrier USS Yorktown (CV-10), according to an online obituary, which we first heard about through the educational Facebook group WW II uncovered.

It looked like his successful run was about to end that day over the Pacific as Levenson plummeted, but luck was on his side. The aviator thought the streaming parachute must have slowed his fall, The Jewish Post reported, because he survived the plunge. The sea was rough too, and he may have hit the top of a wave and coasted down which would have broken the force of impact.

Surviving a fall like Levenson’s is not unheard of. People have dropped from heights as far up as 30,000 feet, but they lived because they fell into soft surfaces such as snow, a plowed field, tree branches, a swamp, or a blackberry bush, according to the BBC and NPR. It may have helped that it takes a human body 1,880 feet of freefall to reach its fastest falling speed, according to the BBC, and Levenson did not get a chance to accelerate that much because he fell from only 1,200 feet.

Whatever the reason, Levenson was alive, and he ripped off his parachute harness as he struggled to the surface. But he seemed to have used up all his good luck on surviving the fall, because his “Mae West” — the life vest given out to American and British service members that was nicknamed after the chesty Hollywood actress — only inflated part-way, meaning he would have to keep himself afloat.

If treading water alone in the Pacific wasn’t enough, Levenson also had to deal with pesky seabirds, which the sailor had a personal fear of. The gulls kept making runs at him and one even hit him in the eye, he told The Jewish Post.

“I’ve got a phobia about chickens or fowls and can’t go near them,” he said. “I pulled out my knife and began screaming and making passes myself, but they didn’t seem worried and kept circling, waiting for me to die. So I made up my mind — I wouldn’t die.”

Levenson’s strength of will paid off, and three hours later a patrol boat rescued him. The aviator was hospitalized with burns, lacerations, severed leg tendons and injuries to his left arm muscles. One might forgive Levenson for being done with flying after that, but he had a monkey on his back that only the cockpit could throw off. According to newspaper reports, the sailor insisted on flying again within a month “so he would not lose his nerve if grounded too long.”

“I had thought in my mind all the time that I should give up combat flying,” he told the Jewish Post. But he signed up for another carrier assignment anyway. “Don’t get me wrong, I’m not scared—just nervous,” he said.

It’s not clear from the press clippings when exactly Levenson’s crash occurred. His bombing run that day took place “against a Japanese-held island about 50 miles north of Saipan.” That might describe the 1.74-mile long island of Farallon De Medinilla, which was controlled by Japan during the war. The battle of Saipan took place in June and July, 1944.

After the war, Levenson’s former commanding officer, Lt. Cmdr. Edward La Roe, wrote a glowing letter of recommendation about the pilot, saying that his “outstanding ability, daring, skillful and aggressive action have been responsible for inflicting severe damage to the enemy and have brought forth his great loyalty and determination.”

Some of those qualities might be inherent to good Helldiver pilots. Because of the limited space aboard aircraft carriers and the difficulty of hitting a moving enemy ship, the Navy preferred precision dive bombing over the massed level bombing used extensively over war-torn Europe by the Army Air Forces, according to History Net. To pull off that technique, pilots had to basically play “a game of chicken … with the ocean itself,” naval historian Laura Lawfer Orr said in a video for the Smithsonian Museum.

The pilots start at about 20,000 feet, which is about four miles above the ocean. At that altitude, a huge ship on the surface below appears “about the size of a ladybug on the tip of a shoe,” Lawfer Orr said.

The pilots then plunged into a 70-degree dive at roughly 275 miles per hour straight toward the target with the metal airplane rattling all around them and flak often going off in their midst before yanking the bomb release lever and pulling out of the dive at the last minute, about 1,500 feet over the water. That is, if they didn’t black out from all the G-forces working on them.

Though the Helldiver was purpose-built for dive bombing, it was such a problem child of an aircraft that the British Navy preferred to use ancient biplane torpedo bombers instead, according to Aviation History.

“An objective assessment of the [Helldiver’s] merits can only conclude that the success of those squadrons owed far more to the gallantry and skill of their aircrews than to the quality of the aircraft in which they flew,” wrote historian Robert Guttman in a 1999 Aviation History article.

Levenson was one of those gallant aircrew members. La Roe, his commander, wrote that from February 1944 to October 1945, Levenson flew as a wingman and section leader against heavily defended airfields, shipping and supply installations in the Bougainville, New Britain, New Ireland and Japanese Home Island Areas. But when the war officially ended on Sept. 2, 1945, Levenson’s career continued. Though the airlines preferred multi-engine pilots, the single-engine Helldiver veteran took on a cargo sales manager role for KLM Royal Dutch Airlines’s airfreight business in 1946.

Levenson pioneered many innovations in the airfreight industry and was later honored as “Air-Cargo Man of the Year” in 1960 by the Airfreight Industry Association. He moved to Seaboard World Airlines in 1965, retired in 1980 and kept flying for fun in his spare time, the obituary said.

Levenson passed away in 2008 the day before his 88th birthday, according to his obituary. But 10 years earlier, he got a chance to sit in a dive bomber again during a tour of his old ship, the Yorktown, which had since become a museum ship in Charleston Harbor, South Carolina. It was 54 years and thousands of miles from where he had nearly died in the skies near Saipan, but he had stayed true to his word.

“I made up my mind,” Levenson thought that day in the water after his miraculous crash. “I wouldn’t die.”