Navy will allow off-duty sailors to ‘live socially’ according to their preferred gender, but not on duty

Just a few days before the implementation of President Trump's ban on transgender troops, a clarification from the Navy on the dress code of sailors could be perceived as a consolation prize, but it might feel like a slap in the face 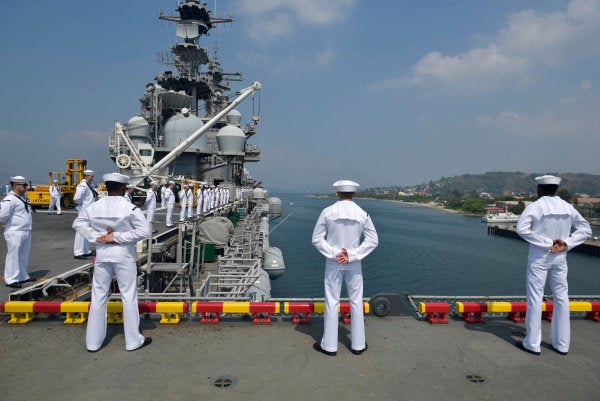 For transgender people in the U.S. military, April is shaping up to be a bittersweet month. But mostly bitter.

Just a few days before the implementation of President Trump's ban on transgender troops, a clarification from the Navy on the dress code of sailors could be perceived as a consolation prize, but it might feel like a slap in the face.

In a recently released administrative message, Navy officials said that sailors were free to “live socially” in their preferred gender while not on duty. They do, however, still need to conform to the standards associated with their biological gender while in uniform.

The clarification comes nearly a month after a memo signed by Deputy Defense Secretary David Norquist introduced the current version of the Trump ban: Individuals have to serve in their birth gender, and transgender personnel are banned from transitioning to their self-identified gender.

It is unclear how the announcement of the Navy's “don't ask just dress” policy will improve the lives of transgender individuals who are currently serving, or who want to serve in the Navy.

Bree Fram, communications director at the LGBTQ military advocacy group SPART*A, saw the move as a positive step. Speaking to NBC News, Fram said that the organization is “thrilled,” and that the Navy is giving sailors the liberty to be who they are. “The Navy is taking care of its transgender service members by giving them the option to dress and express themselves as they choose.”

But with the ban, which goes in effect Friday, transgender individuals who haven't been “grandfathered in” are effectively barred from serving, even with the Pentagon's continual refusal to call it a ban.

When speaking to the Daily News about the ban, Chase Strangio, a staff attorney with the ACLU's LGBT & HIV Project said the Trump administration is “essentially saying that, in court and publicly, that 'oh, it's not a ban because as long as have never had any medical treatment, as long as they've never taken a step to transition, can serve as long as they do so in their assigned sex.'” he said. However, “that literally defines a trans person.”

The new guidelines will, technically, let sailors live as who they are — just as long as they do it during selected hours. The Navy announcement reminds sailors that “there is no policy that prohibits the ability of a service member to express themselves off-duty in their preferred gender,” officials wrote. “Appropriate civilian attire, as outlined in the uniform regulations, will not be determined based on gender.”

In practice, it asks people to act as if they were of a different gender, simply by putting on an uniform.

“Gender is a fundamental aspect of a person's identity,” Shannon Minter, the director of the National Center for Lesbian Rights Legal Director told NBC News. “It cannot be turned on and off like a switch, and the very notion of requiring a non-transgender person to do so would be immediately recognized as cruel and unworkable. It is equally cruel and unworkable for transgender people.”

SEE ALSO: Here's Everything You Need To Know About The Pentagon's Transgender Ban

WATCH NEXT: What It's Like Being Transgender in The Military