“The 24th Marine Expeditionary Unit (MEU) has initiated a command investigation regarding LCpl Hunter Clark’s attendance at the event last weekend to determine if any DoD policies were violated.” 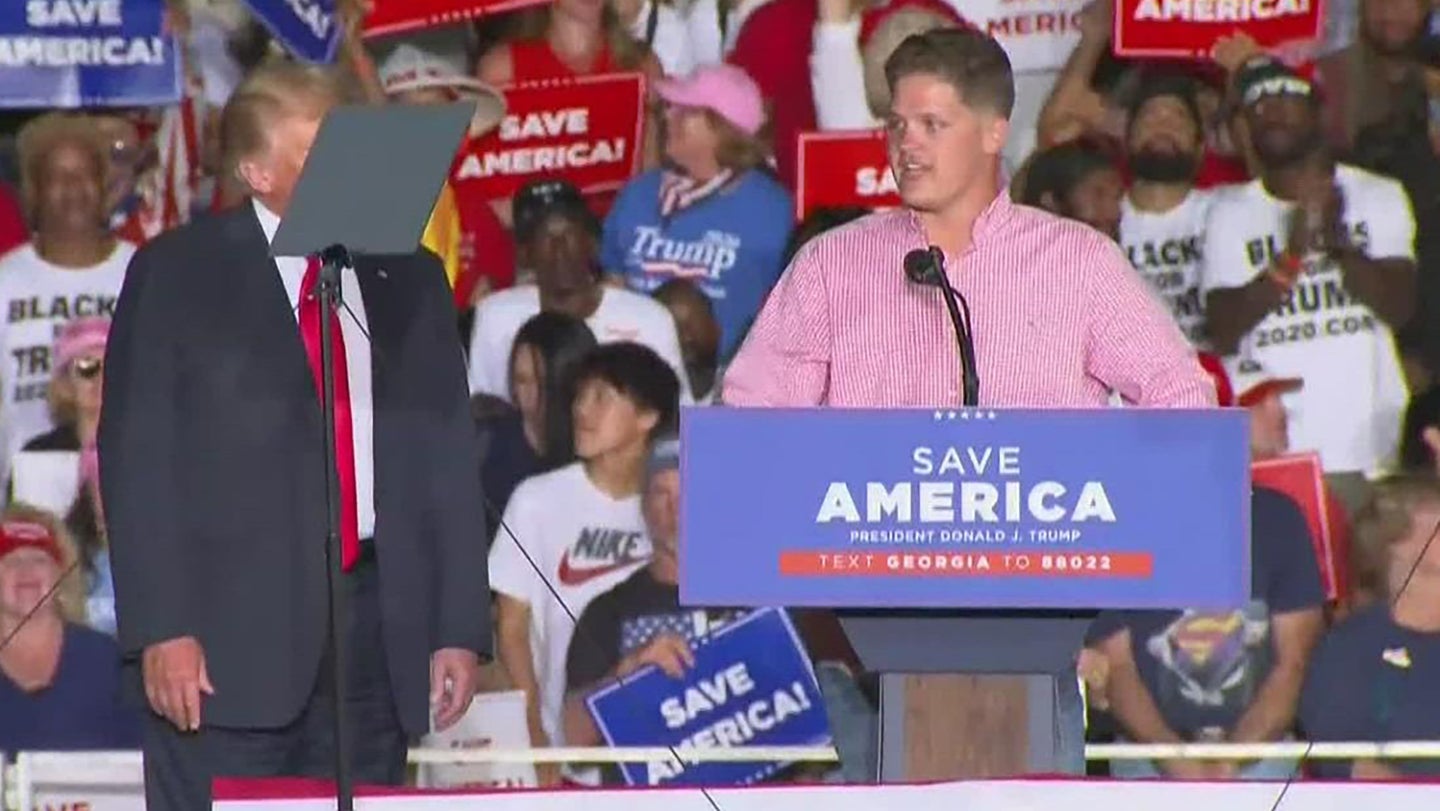 ​​A Marine who says he saved a baby in Kabul by lifting the infant over the walls outside Hamid Karzai International Airport is now under investigation for appearing on stage with former President Donald Trump at a recent political rally in Georgia.

Lance Cpl. Hunter Clark was one of nearly 6,000 U.S. troops tasked with guarding the airport last month as thousands of desperate people tried to get in to escape the Taliban. On Sept. 25, Clark appeared on stage with Trump for just under a minute at a “Save America Rally” in Perry, Georgia.

Clark quickly introduced himself as “the guy that pulled the baby over the wall,” adding that “it’s definitely probably one of the greatest things I’ve done in my entire life.”

The Marine continued, saying “I just want to thank all the support from all y’all. It really means a lot and I’m glad to be home now.”

Clark did not specify when he pulled a baby over the wall at Hamid Karzai International Airport. After this story was first published, Clark’s command told Task & Purpose that he was not the Marine shown in an Aug. 19 viral video hoisting an infant above the razor wire outside the airport.

The 24th Marine Expeditionary Unit cannot confirm if Clark is one of the other Marines in that video, said Capt. Kelton J Cochran, a spokesman for the 24th MEU. Cochran also noted that there were several incidents during the evacuation of Afghans handing children to U.S. troops.

Now Clark’s command is looking into whether he violated the military’s ban on active-duty troops engaging in partisan political activity.

“The 24th Marine Expeditionary Unit (MEU) has initiated a command investigation regarding LCpl Hunter Clark’s attendance at the event last weekend to determine if any DoD policies were violated,” Cochran said. “Any details pertaining to this incident are not releasable while the investigation is being conducted.”

The Sept. 25 “Save America Rally” was another opportunity for Trump to rail against his political adversaries and to spread lies that President Joe Biden was not legitimately elected. Trump has failed to prove in more than 60 lawsuits that the 2020 election was tainted by widespread voter fraud. His former Attorney General William Barr and Director of the Cybersecurity and Infrastructure Security Agency Chris Krebs have also disputed the myth that the presidential election was stolen.

However, Clark was not in uniform when he appeared with Trump. Nor did he campaign for a political candidate or suggest that service members follow a political party.

Although the rally was a political event, Trump ostensibly invited Clark on stage as part of a public show of support for U.S. troops.

“We’re also honored to be joined by one of the Marines who bravely served in Kabul during the withdrawal and helped evacuate children over the airport and over the airport wall,” Trump told the crowd at the Sept. 25 rally in Perry, Georgia, where Trump said they had also reserved “13 empty seats of honor” for the 11 Marines, a Navy corpsman, and an Army special operations soldier killed in the Aug. 26 attack on the airport’s Abbey Gate.

“You saw him, he did a great job, Lance Cpl. Hunter Ian Clark. Lance corporal get up here!” Trump said at the rally.

Clark’s appearance at the rally comes at a time when military commanders are looking closely at service members’ behavior online and in public. It also coincides with the decision by four mid-level officers who independently decided to risk their own careers by openly criticizing their military and civilian leaders, which Task & Purpose wrote about at length on Sept. 24.

Whenever a member of the military speaks publicly, talks on a television show, or goes viral because of their service, it comes with a certain amount of scrutiny, and depending on what they say or do, it might bring with it some professional risk. This is because it’s generally assumed that when a member of the military speaks in their capacity as a service member, that they are representing the military. In other words: if the only reason you’re on television or have a microphone shoved in your face is because you start a sentence by saying “My name is Sgt. so-and-so” then people are going to assume you’re speaking on behalf of the military.

This has proven to be a problem for military personnel who have leveraged their service for political ends or air time. The military has warned lawmakers such as former Reps Tulsi Gabbard (D-Hawaii) and Doug Collins (R-Ga.) to not appear in campaign advertisements while wearing their military uniforms. Military personnel are also not allowed to attend political events in uniform. And in 2019, the South Carolina Army National Guard investigated a major who attended a campaign rally for then-presidential candidate Joe Biden, during which she was captured on video telling Biden that she prayed he would be elected.

But even a hint of partisan involvement by service members can cause an uproar. The supervisor of two junior enlisted Army Reserve soldiers was disciplined after the soldiers appeared uniform during an August 2020 Democratic National Convention video as the American Samoa delegation voted for Biden to be their party’s nominee for president.

And in another instance, the Marine Corps looked into accusations that two Marines opening the door for then-President Trump in August 2020 was akin to “politicizing the military” because the moment had been used as part of a Republican National Campaign video. The Corps determined that the Marines had not crossed any ethical lines because their official duties included “opening doors for the President.”

Between politicians constantly jockeying for their time in the sun ahead of a bid for office, the 24/7 news environment, and hyper-partisan social media, service members would be wise to expect to be scrutinized any time they attend an event with a political figure, whether they are in or out of uniform.

Correction: An earlier version of this story incorrectly reported that Lance Cpl. Hunter Clark was shown in an Aug. 19 video pulling a baby over the wall of Hamid Karzai International Airport in Kabul.