“This is a true example of the professionalism of the Marines on site." 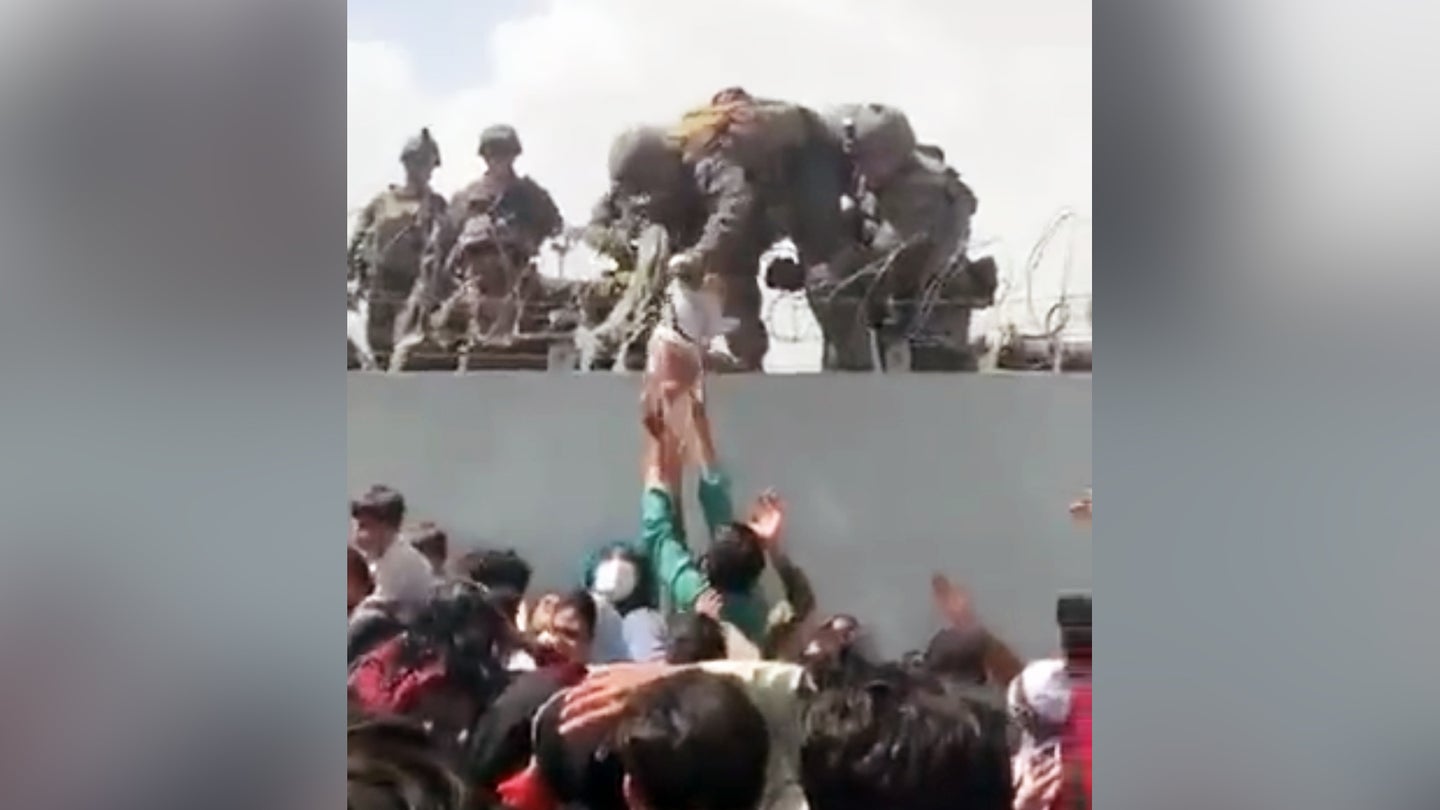 A U.S. Marine brought an Afghan baby to safety over the walls of the Hamid Karzai International Airport in Kabul, Afghanistan in video footage that emerged on Thursday.

A Marine with the 24th Marine Expeditionary Unit (MEU) was handed the infant from outside the airport walls by the child’s father as a crowd of Afghans watched, according to officials. As has been the case outside the airport all week, a large crowd of Afghans had formed outside the airport hoping to gain access to escape Kabul after the capital city fell to the Taliban on Sunday. Infantrymen from the MEU’s 1st Battalion, 8th Marine Regiment have been on the scene since arriving earlier this week to provide security and process evacuees prior to departure. Marines from 2nd Battalion, 1st Marines are also there along with a large contingent of paratroopers from the 82nd Airborne Division.

Taliban checkpoints are set up throughout the city, however, and they sometimes turn people away violently. The scene has become all too common in the past week, as several videos have shown militants blocking airport gates with trucks or firing rounds into the air as Afghan families cower in fear.

“We are mindful that the checkpoints there can be obstacles to entry for people that need entry and are qualified for entry,” Pentagon spokesman John Kirby said Thursday. “So, we’re going to continue to work this with our communications with the Taliban in the hopes that we can clear up any stumbling blocks to that processing.”

Yet for those who reach the front, they at least have a chance to tug at the heartstrings of Marines or soldiers on guard. One Afghan woman, for example, was seen on video that emerged earlier in the week pleading with Marines inside to let her and other civilians in. “Help! Help! The Taliban is coming!” she cried.

The video of the Marine reaching over the wall shows a service member who made a snap decision when handed the baby from the crowd and took hold of the child out of safety concerns and to “diffuse the situation and continue to keep the area secure,” a defense official said.

“This is a true example of the professionalism of the Marines on site, who are making quick decisions in a dynamic situation in support of evacuation operations,” said Maj. James Stenger, a Marine Corps spokesman.

When asked for more details about the child on Friday, Kirby told reporters the baby was taken to a Norwegian military hospital at the airport for treatment and later reunited with their father. “The parent asked the Marines to look after the baby because the baby was ill,” Kirby said.

This doesn’t appear to be an isolated incident. Photos publicly released by the Department of Defense on Friday show service members assisting other children over the wall and service members cradling Afghan children in their arms.

Stenger confirmed the child in the video was reunited with their father and “safe at the airport” on Thursday, but it remains unclear what happened after that. Officials could not say whether they were evacuated or were sent back into Kabul after the medical treatment. A Pentagon official referred the matter to the State Department. Diplomats have reunited a number of unaccompanied minors and were working hard to reunite others who had been separated from their families, a State Department spokesperson said on condition of anonymity.

“We’re considering every opportunity and every means by which we could get folks to the airport,” President Joe Biden said in a Friday press conference in which he fielded repeated questions about the so-called Taliban “gauntlet” of checkpoints that had formed outside the walls.

“The reason why we have not gone out and set up a perimeter way outside the airport in Kabul is that it’s likely to draw a lot of unintended consequences,” Biden said.