The university had falsely advertised that it had a relationships with AT&T Inc, Yahoo!, Microsoft Corp and Twitter Inc which could lead to jobs for students. 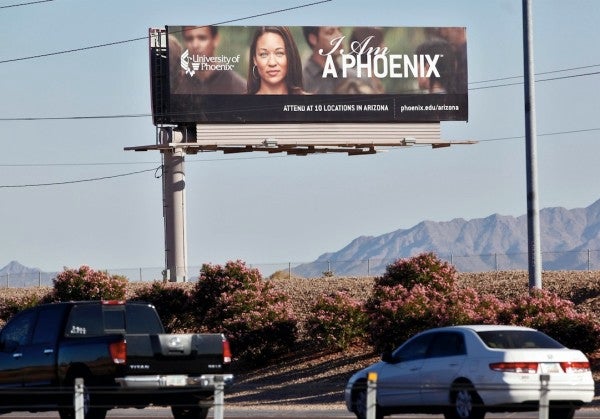 WASHINGTON (Reuters) – The University of Phoenix, which is owned by Apollo Education Group, has agreed to pay $191 million to settle charges that it falsely advertised close ties with major U.S. companies that could lead to jobs for students, the Federal Trade Commission said on Tuesday.

The University of Phoenix will pay $50 million to the FTC to return to consumers and cancel $141 million in student debt.

Some of the advertisements targeted military and Hispanic students, the FTC said.

The FTC said the University of Phoenix had falsely advertised that it had a relationships with AT&T Inc, Yahoo!, Microsoft Corp and Twitter Inc which could lead to jobs for students.

The advertisements also indicated falsely that big companies helped the school build a curriculum which could lead to jobs, the FTC said.

The university said in a statement that the FTC had focused on a marketing campaign that ran from late 2012 to early 2014.

“We continue to believe the university acted appropriately,” it said. It was settling “to avoid any further distraction from serving students that could have resulted from protracted litigation, as well as the time and expense of the litigation itself,” it added.

The University of Phoenix is on a long list of for-profit colleges that have attracted the attention of U.S. regulators because of accusations that they were not honest about metrics to judge student success.

In 2016, DeVry University agreed to pay a $100 million settlement to the FTC, which alleged that the school had not been honest about how successful its graduates were in finding well-paid jobs.