On Oct. 8, the Department of Defense quietly announced the suspension of University of Phoenix from its tuition assistance programs,... 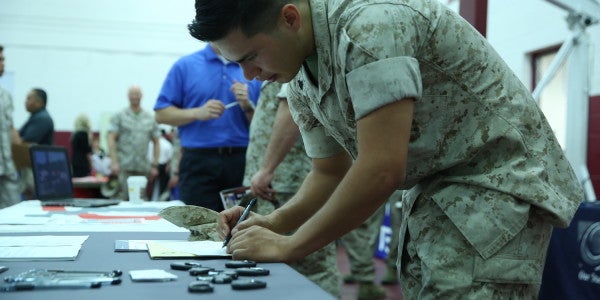 On Oct. 8, the Department of Defense quietly announced the suspension of University of Phoenix from its tuition assistance programs, barring school officials from recruiting at military facilities, including job fairs. The suspension comes following an investigation by Reveal, which shed light on the university’s use of improper recruiting and marketing practices.

Reveal’s investigation, released in June, found University of Phoenix side stepping a 2012 executive order by President Barack Obama to connect with service members and veterans by sponsoring concerts and other events on military bases, attending veteran-specific job fairs, unrolling robust marketing campaigns, and even evoking the seals of the military branches on a University of Phoenix challenge coin.

On Thursday, DoD changed the status of all University of Phoenix campuses to “Probation – DoD” on its website of participating institutions. According to Reveal News, the university received $20 million in military tuition assistance from DoD in 2014 alone.

Dawn Bilodeau, the chief of the Defense Department’s voluntary education program, told Reveal in a written statement that University of Phoenix “will not be authorized access to DoD installations for the purposes of participating in any recruitment-type activities, including but not limited to job training, and career events and fairs. Further, no new or transfer students at the institution will be permitted to receive DoD tuition assistance.”

However, students already receiving tuition assistance will be permitted to complete courses with the university.

Sen. Dick Durbin of Illinois, a leading voice calling for an investigation into the recruiting practices of University of Phoenix, released a statement lauding DoD’s decision, also saying he will call on the departments of Education and Veterans Affairs to review the findings and take action to protect Title IV students and vets using G.I. Bill benefits.

As previously argued on Task & Purpose, the problem with veterans spending their G.I. Bill money on for-profit universities like University of Phoenix is that these institutions are owned by and run as businesses with a top priority to make money. This money — which comes almost entirely from taypayer dollars — is then largely reinvested into marketing and recruiting, rather than into improving the quality of the education for enrolled students. As revealed in a 2012 Senate report, the results are often high rates of loan default, low retention rates, aggressive and manipulative recruiting practices, higher than average tuition, and poor career placement services.

University of Phoenix has received more than $1.2 billion in G.I. Bill money since 2009.