U.S. military aircraft effectively "wiped out" an Afghan military checkpoint in Tarin Kot on Wednesday after soldiers there mistakenly fired on a joint patrol of Afghan and American troops. 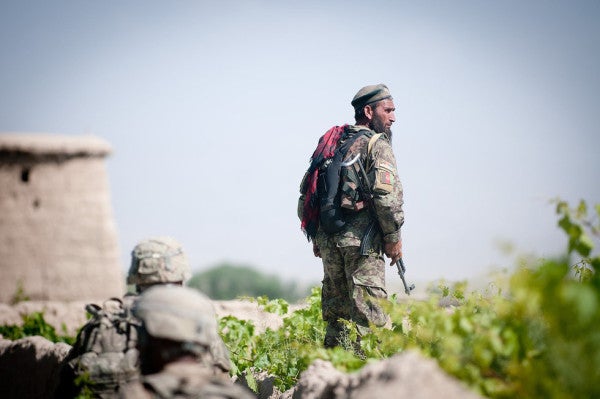 U.S. military aircraft effectively “wiped out” an Afghan military checkpoint in Tarin Kot on Wednesday after soldiers there mistakenly fired on a joint patrol of Afghan and American troops, according to The New York Times.

“Afghan and U.S. forces attempted to de-escalate the situation but they continued to be fired upon,” Mendie said.

Another U.S. military spokeswoman described the incident to the Times as an “example of the fog of war.” The firefight between Afghan troops came just days after the Taliban attacked an Afghan outpost in Bala Murghab, where they killed or captured an entire company of more than 50 soldiers.

Mendie alluded to the problem of Taliban forces sometimes wearing Afghan uniforms and using their vehicles in attacks that could have been a contributing factor: “We are operating in a complex environment where enemy fighters do not wear uniforms and use stolen military vehicles to attack government forces.”

A senior Afghan Defense Ministry official told Stars & Stripes there was a lack of communication among Afghan forces during what was a planned night raid by the patrol. “Our forces on the ground, they didn't know about this fact, they started shooting,” the official said.

There were conflicting reports of casualties, with one Afghan official telling the Times six soldiers were killed and nine wounded. In a press release, the Afghan Ministry of Defense said there were five ANA soldiers killed and 10 injured.

There were no American casualties, Mendie said.