A contingent U.S. and Afghan troops came under fire from another group of Afghan security forces before calling in air support in self-defense, a U.S. military spokesman announced on Wednesday 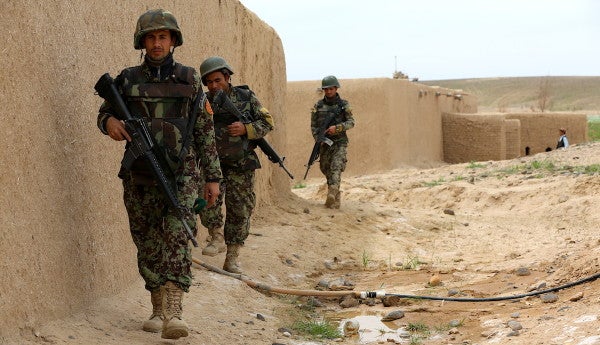 In a bizarre case of friendly fire, a contingent of U.S. and Afghan troops came under fire from another group of Afghan security forces before calling in air support in self-defense, a U.S. military spokesman told Task & Purpose on Wednesday.

The joint U.S.-Afghan force “came under effective fire” during a joint patrol in the country's Kunduz province, forcing them to request precision air support “to suppress the onslaught of machine gun fire,” said Army Col. David Butler, a spokesman for U.S. Forces-Afghanistan.

No U.S. troops were killed or wounded in the incident, Butler said, adding that the Pentagon plans on convening a joint investigation board to determine the details of the incident.

“This operation was extensively planned and coordinated with U.S. and Afghan security forces to prevent an event like this from occurring,” Butler said. “We regret the tragic loss of our Afghan partners.”

The incident comes less than a month after 18 Afghan police officers were killed by U.S. airstrikes in the Helmand province while coming to the defense of civilians during a Taliban attack.

“This is an example of the fog of war,” spokesman Sfc. Debra Richardson said at the time. “The U.S. conducted a precision self-defense airstrike on people who were firing at a partnered U.S.-Afghan force.”

SEE ALSO: Here's The Real Story Behind The Top General In Afghanistan's .45 Pistol

WATCH NEXT: F-35As Roll Deep In 'Beast Mode' In Afghanistan