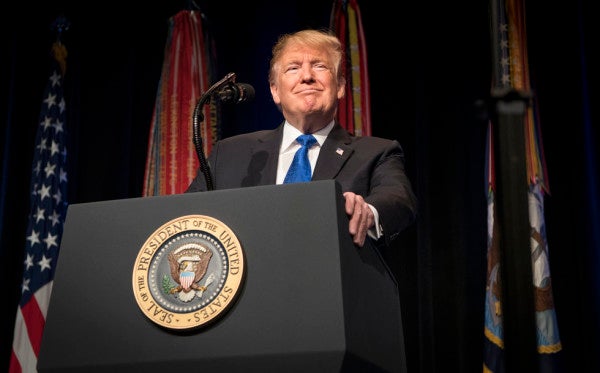 On Tuesday, Trump issued a proclamation declaring April 9th as National Former Prisoner of War Recognition Day, a tradition commanders-in-chief have observed since the occaision was established by Congress in 1988.

“Throughout our history, hundreds of thousands of American service members have been held as prisoners of war (POWs), enduring harsh treatment, unforgiving conditions, and the anguish of being separated from their families,” Trump wrote. “These brave Americans are true patriots, and their inspiring legacy of selfless courage is a testament to their fierce spirit, unshakeable loyalty, and enduring resilience.”

This is all well good and all, but isn't this the same guy who stated he liked people who weren't captured during Family Leadership Summit in Iowa back in July 2015? You betcha!

Then-candidate Trump immediately realized his mistake, tweeting later that day that “captured or not, all our soldiers are heroes!” But don't be fooled: This is a stance Trump's taken since at least 1999, according to The Washington Post:

In a December 1999 interview with Dan Rather, Trump was asked about McCain, who had recently kicked off his first presidential bid. Trump also made a short-lived run that year for the Reform Party's presidential nomination.

“He was captured,” Trump said of McCain. “Does being captured make you a hero? I don't know. I'm not sure.”

Here's the video in question:

SEE ALSO: How To Spot Plastic Patriotism, Using 'The Troops' For Your Pet Cause

WATCH NEXT: The Dirtbag Patriot Olympics