"Their official duty is to assist the President in office; those duties include opening doors for the President" 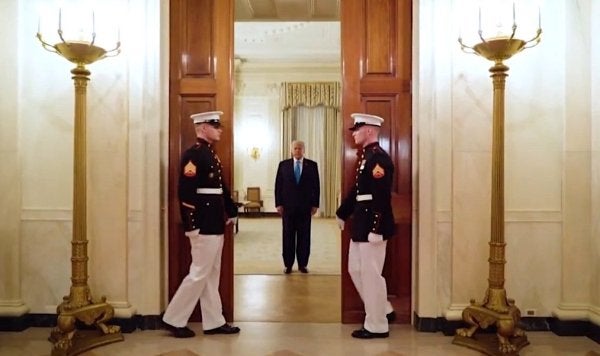 Two Marines who opened doors for President Donald Trump during an event that was featured during the Republican National Convention were just doing their jobs, the Corps said in a statement.

The convention aired video on Tuesday of Trump attending a naturalization ceremony at the White House that was presided over by Chad Wolf, the acting secretary of the Department of Homeland Security.

Some of Trump’s critics claimed that showing two Marines opening the doors for the president so he could enter the room in which the naturalization ceremony took place violated the Defense Department’s longstanding policy against service members taking part in political rallies while in uniform.

“Using the Marines in this segment is just the latest example of Trump shamelessly and damagingly politicizing our military,” Army veteran and Iraq and Afghanistan Veterans for America founder Paul Rieckhoff tweeted Tuesday, adding that the Marines were merely “props” for the president.

Chad Wolf: "Mr. President, I want to again commend you for your dedication to the rule of law." #RepublicanConvention pic.twitter.com/jGdRARlq25

The Marine Corps issued a statement on Wednesday saying that the two Marines were doing their official duties when they opened the doors for Trump.

“The Marines in the footage of the ceremony at the White House were at their assigned place of duty,” the statement says. “Their official duty is to assist the President in office; those duties include opening doors for the President.”

“The White House publicized the content of the event on a public website this afternoon and the campaign decided to use the publicly available content for campaign purposes,” the official said. “There was no violation of law.”

Tuesday’s naturalization ceremony came exactly a week after two uniformed soldiers appeared in the Democratic National Convention's video roll call. The Army is investigating whether the soldiers from the 9th Mission Support Command broke the Defense Department’s policy against attending partisan events while in uniform.

Related: The Army is investigating two soldiers for appearing in uniform during a Democratic campaign event