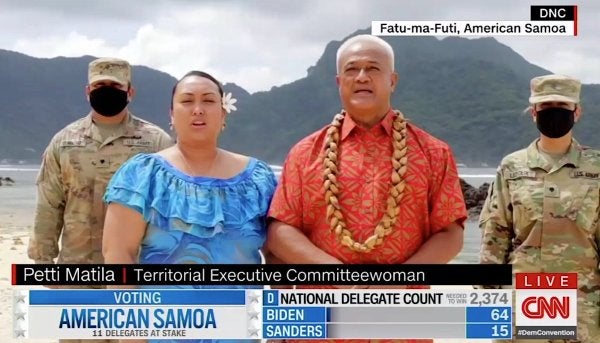 The Army has launched an investigation into why two  soldiers flanked Democratic delegates on Tuesday during a video roll vote for the Democratic National Convention, a service spokesman said.

The soldiers were both in uniform as American Samoa’s delegation voted for former Vice President Joe Biden to be the party’s nominee to run against President Donald Trump in November.

“The Army is investigating two soldiers from the 9th Mission Support Command who appeared in uniform during the Democratic National Convention on Aug.18,” said Army Lt. Col. Emanuel Ortiz Cruz. “Wearing a uniform to a partisan political event like this is prohibited.

“The Army follows the Department of Defense’s longstanding and well-defined policy regarding political campaigns and elections to avoid the perception of DoD sponsorship, approval or endorsement of any political candidate, campaign or cause,” he added.  “Examples of prohibited political activities include campaigning for a candidate, soliciting contributions, marching in a partisan parade and wearing the uniform to a partisan event.  ”

Democratic spokeswoman Xochitl Hinojosa called including the soldiers in the video roll call “an oversight.”

“Each state was asked to highlight issues and values that matter most and the American Samoa delegation wanted to highlight their commitment to military service when they filmed their segment,” Hinojosa told Task & Purpose.

Defense Secretary Mark Esper issued a memo on Feb. 5 reminding service members to remain apolitical during this election cycle, but that is very difficult in a world where anyone with a phone can post pictures or video of troops making partisan statements.

To wit: The Navy launched an investigation after a petty officer was shown in a viral video yelling “F—k Trump” at protesters while she was in uniform.

And last year, a major in the South Carolina Army National Guard was shown in a video telling Biden at a campaign event that she was praying he would be elected president.

The 2020 presidential election is scheduled for Nov. 3.