'You just have to ask yourself: What is going on?' 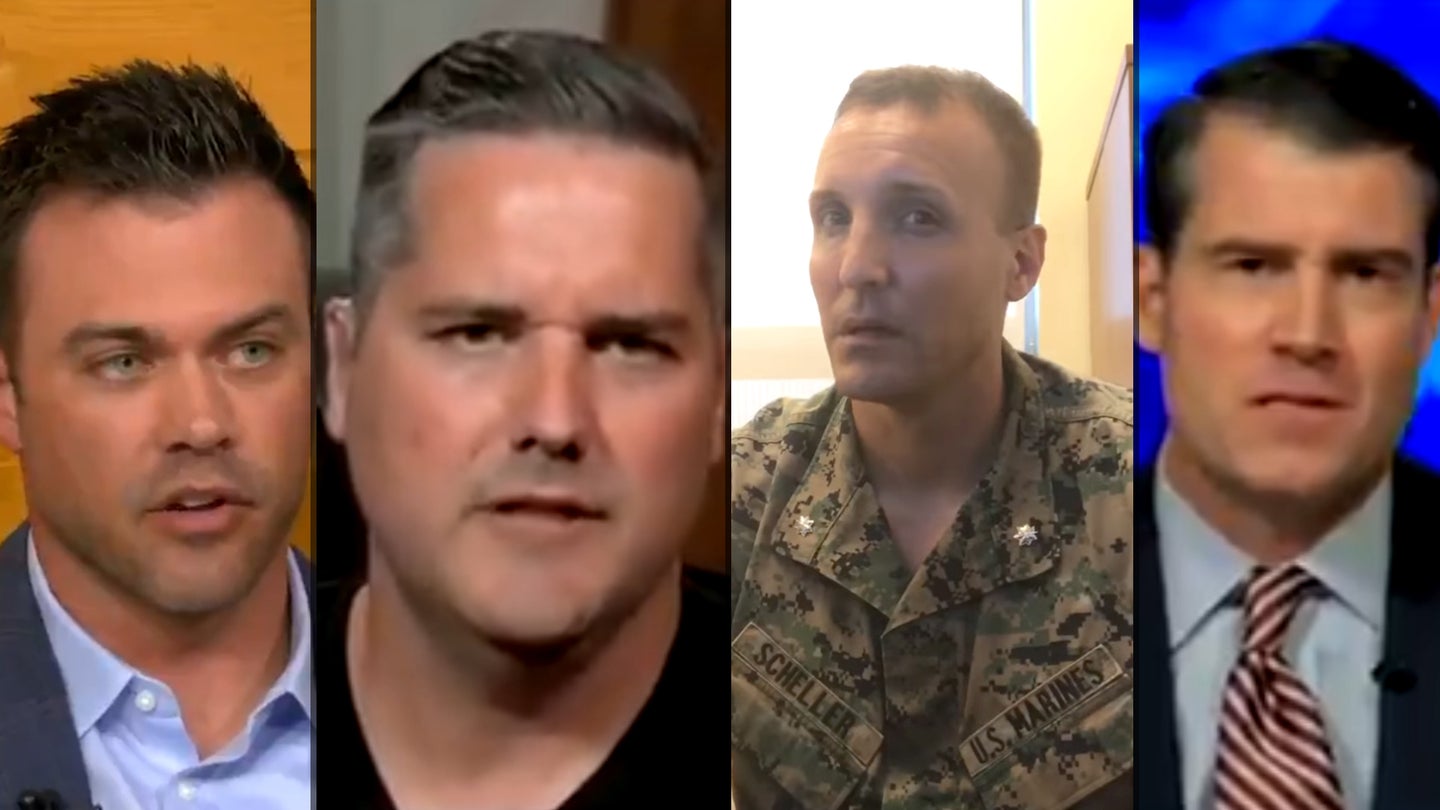 There must be something in the water that mid-level military officers are drinking because four of them have publicly thrown down with their chain of command since spring and the acts of open defiance show no signs of slowing down.

Since May, a Space Force lieutenant colonel has claimed that the military’s diversity and anti-extremism training are rooted in Marxism; a Marine lieutenant colonel became a lightning rod for openly critiquing military leadership over the Afghanistan withdrawal while in uniform; an Army lieutenant colonel has tried to resign just short of retirement because he believes that requiring troops to be vaccinated for COVID-19 is an “unlawful, unethical, immoral, and tyrannical order”; and a Navy commander has gone on Fox News to promote conspiracy theories about COVID-19 vaccines.

Of course, nothing happens in a vacuum. Public discourse has become poisoned by misinformation, conspiracy theories, and naked partisanship, much of which becomes fodder for amoral politicians and cable news hosts. In such a volatile political environment, all service members are at risk of destroying their careers by going full Leroy Jenkins on social media, or in a self-published book, or a video filmed in the back of a refurbished bus.

But for reasons that are still unknown, the four officers who have decided it’s better to flame out than to fade away have all been the same paygrade. Three of them are lieutenant colonels and one is a Navy commander. All those ranks are the fifth officer paygrade in the military, commonly referred to as O-5s.

Officers at that rank are above the company commander level, but not at the point where they have a star on their collar. Getting there is no small feat either, but it’s also an odd position in that field-grade officers aren’t quite “high ranking” but they have just enough rank so that people notice when they act out in public.

Furman’s argument leaned heavily on disputed figures from the U.S. government’s Vaccine Adverse Event Reporting System, which allows people to report possible side effects from vaccines. The VAERS website includes a disclaimer in its Frequently Asked Questions section which states that it is generally not possible to know if a vaccine caused the side effects reported; that the database contains information with errors; and that VAERS cannot be used to determine the rate of side effects.

In fact, one entry in the database claims that the side effects of a measles, mumps, and rubella vaccine included “alien abduction” along with “super strength” and “rage attacks,” according to WTHR, an NBC affiliate in Indianapolis.

Yet Furman claimed the VAERS data shows that COVID-19 is less dangerous than the vaccines, especially since service members are among the healthiest people in the United States.

“Combine that with the unknown long-term impacts of the vaccine from this aborted fetal cell line, either derived or manufactured gene therapy vaccine,” said Furman, who appeared to spread a debunked claim that one of the vaccine’s ingredients includes DNA from aborted fetuses.

It’s worth noting that the claim that COVID-19 vaccines include cells from aborted fetuses is likely to draw the attention, and concern, of service members with strong religious beliefs.

To get some additional context on this, Task & Purpose reached out to Kari Debbink, a biology professor at Bowie State University in Maryland. While scientists used fetal cells from abortions it carried out in 1973 and 1985 to develop the COVID-19 vaccines, none of those cells are actually in the vaccines that people take, Debbink said.

Fetal cell lines have been used to create other vaccines and scientists are not conducting abortions to get the cells for the COVID-19 vaccines, she said.

When Carlson asked the Navy commander if he expected to be relieved of command for appearing on his show, Furman replied “No, absolutely not.”

For the time being, it appears that Furman has not incurred the wrath of his superiors.

Furman is currently not under investigation for his comments on Tucker Carlson’s show, said Navy spokeswoman Lt. Cmdr. Patricia Kreuzberger.

As of Friday, 84% of active-duty sailors and 80% of all sailors are fully vaccinated against COVID-19, Kreuzberger said.

“The health and wellbeing of our sailors is our top priority and immunizing sailors allows the Navy to accomplish our mission,” Kreuzberger said. “Any sailor has the right to seek a waiver in accordance with Navy policy. The Navy will process and consider all requests thoroughly.”

Furman is the second mid-level officer who has recently attacked the Defense Department’s policy of making novel coronavirus (COVID-19) vaccinations mandatory for all troops. Army Lt. Col. Paul Hague described the mandatory vaccines as “an ideologically Marxist takeover of the military and the United States government at their upper echelons” in his resignation letter, which his wife posted on Twitter on Sept. 9.

Two other lieutenant colonels have also publicly torched their careers this year by challenging senior military leadership. Space Force Lt. Col. Matthew Lohmeier was relieved in May as commander of 11th Space Warning Squadron after making comments on a podcast about his book, in which he claims that Marxist ideology is seeping into the military. The Air Force Inspector General’s Office is currently investigating him.

Then in August, Marine Lt. Col. Stuart Scheller lost his job as commanding officer of the Advanced Infantry Training Battalion at the School of Infantry East, Camp Lejeune, North Carolina, after demanding on social media that senior military leaders be held accountable for their mistakes that led to the chaotic Afghanistan evacuation.

In subsequent social media posts, Scheller vowed to “bring the whole f–king system down” and to charge Marine Gen. Kenneth McKenzie Jr., the head of U.S. Central Command, with dereliction of duty.

The unanswered question remains: Why is the Defense Department facing an epidemic of O-5s who are embracing the “YOLO” philosophy in their careers.

One reason could be that officers at that paygrade are at a point in their careers where they may have “buyer’s remorse” about some of the decisions they’ve made along the way, said retired Army Col. Bob Wilson, who served on the National Security Council in 2016 and 2017.

“You’re at 17, 18 years; you’ve kind of chosen your lot in life, and you may not be super happy with it – a kind of middle-age kind of thing, mid-life thing,” said Wilson, a fellow with the New America think tank’s International Security program.

Also, the country has become decidedly “hyper-partisan” in recent years and more people getting most of their news from sources that conform with their own political beliefs, Wilson said, adding that he thinks senior leaders should take a fresh look at how the military educates officers.

One of the reasons that the conduct of these officers has raised eyebrows is because they have each, in their own way, flouted established norms in the military when it comes to the conduct of military personnel in the news.

It’s generally accepted that any time a service member speaks in public in their capacity as a member of the military that they are representing their service and the Department of Defense at large. Which means that whatever they say will reflect back on the military in a positive or negative way. In short: If the only reason that you’re appearing on television is because you serve in the military, then people are going to assume that you’re speaking on behalf of the military.

In the past this has become an issue for service members who have leveraged their military service for air time in order to pursue their own ends. The Defense Department has warned lawmakers such as former Reps Tulsi Gabbard (D-Hawaii) and Doug Collins (R-Ga.) to not appear in campaign advertisements while wearing their military uniforms. Troops are also not allowed to attend political events in uniform. In 2019, a major in the South Carolina Army National Guard was investigated for attending a rally for then Vice President Joe Biden, during which she was captured on video telling Biden that she prayed he would be elected president.

Even the slightest whiff of troops engaging in partisan activities is enough to cause an uproar. The Army disciplined the supervisors of two junior enlisted Reserve soldiers, who appeared in an August 2020 Democratic National Convention video in uniform as the American Samoa delegation voted for Biden to be their party’s nominee for president.

Separately, the Marine Corps determined that two Marines who opened doors for former President Donald Trump as part of an August 2020 White House ceremony that was used as part of a Republican National Campaign video had not crossed any ethical lines because their official duties included “opening doors for the President.” The Marine Corps’ response came amid accusations that showing video of Marines at the White House opening the door for the president was tantamount to “politicizing the military.”

However, one of the things that makes these recent incidents significant is that so many senior(ish) officers have so publicly ignored the military’s sacred commitment to maintain good order and discipline.

“You just have to ask yourself: What is going on?” Wilson said. “Are we picking the right people for leadership positions? Are we educating people enough? That’s my concern. We have to be adaptive as a force. We have to be able to absorb information and uncertainty and make the best decisions possible for the mission and the people we’re responsible for. And you’re watching arguably senior people with a lot of training and experience invested in them, and they’re just being idiots on social media, on old school media. I think people should really scratch their heads and say: ‘Hey, how can we do better with senior leaders in the military?’”

Despite what these four officers might have hoped to accomplish, their very public outbursts are not going to change anything and will only cause confusion for service members who still follow orders, Wilson said.

“How are soldiers and service members supposed to look at you and determine what they should or should not do within the military by watching your conduct?” Wilson said. “I think it’s ridiculous.”