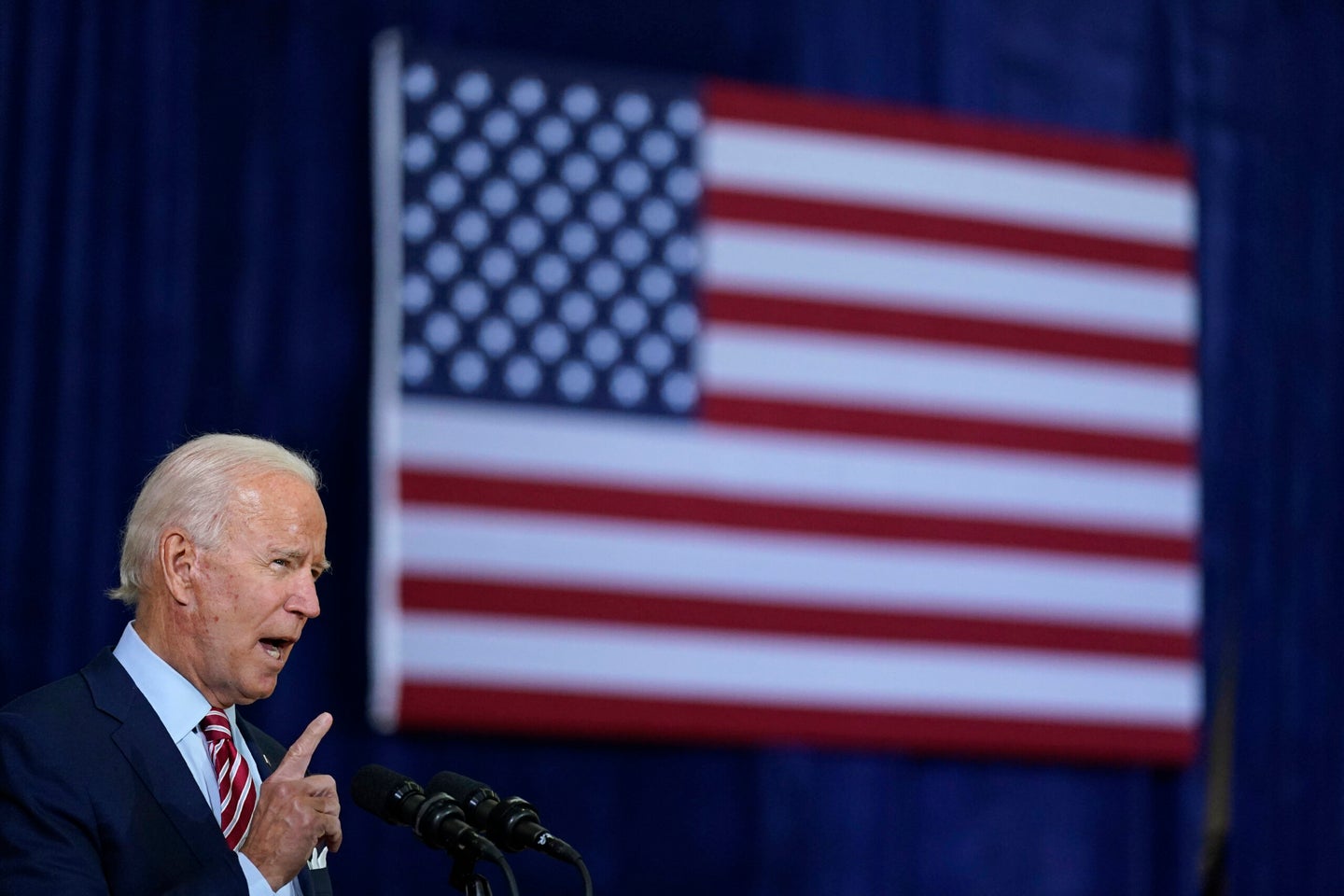 Democratic presidential candidate Joe Biden is facing criticism after he recounted a story about a U.S. military veteran who committed a violent crime after his wartime service.

During a Tuesday roundtable with veterans in Tampa, Florida, the former vice president shared an anecdote about a Marine vet who violently attacked and murdered his neighbor while discussing the mental health challenges that face veterans of America’s foreign wars.

“There was a Marine veteran who had been deployed a total of six times, if my memory is correct, who was in a relatively a modern upscale neighborhood, middle-class neighborhood, and he got up in the morning and he got out, and I think it was a Dodge Ram started down the street in front of his house, which was no sidewalks.

“Saw a woman walking her dog, ran over [to] her, killed her, killed the dog, put her in the back of his pickup truck, took her down to I95, right by where there was all the sand pile for emergencies, molested her, put her back in the truck, came home and called the state police and said, ‘I just killed someone. There was a voice in my head saying I had to kill someone. I had to kill someone,’ and turned himself in.”

Based on multiple news reports, Biden appeared to be referencing an incident from 2011, when Army Staff Sgt. Dwight Smith sexually assaulted and murdered an elderly woman in a neighborhood in Wilmington, Delaware. Those reports conflict with some of the details of Biden’s recounting, such as Smith’s branch of service, and that he deployed twice, once to Iraq and later to Afghanistan, not six times.

Ultimately, whether Smith served two tours downrange, or wore MARPAT or ACU’s makes little difference in Biden’s retelling, because it’s a trope — and one that many veterans were hoping would die off. Though Biden did not explicitly mention post-traumatic stress disorder in his anecdote, it played to a common stereotype surrounding military veterans: That they return home from war changed, damaged, and dangerous.

This theme typically emerges in news stories of violent crimes involving service members — as it did in 2014 when Salon’s Natasha Lennard wrote that “when troops come home, the madness of war comes with them” following a mass shooting at Fort Hood in Texas.

However, this generalization is at odds with the fact that most veterans do not have PTSD — only between 20 percent and 30 percent do, depending on when they served. Additionally, the notion that those struggling with post-traumatic stress will engage in violence is an oversimplification that ignores a range of factors, from the age of perpetrators; to substance abuse; and whether they suffer from comorbid mental health disorders.

“The vast majority of military members who experience combat or witness traumatic events while serving in uniform do not come home and embark on shooting rampages,” as Meaghan Mobbs wrote for Psychology Today following the 2018 mass shooting at Thousand Oaks, California, which was perpetrated by a Marine veteran.

“The ticking time bomb trope of the PTSD-ravaged veteran, made popular by movies like Rambo, is a perversion of the suffering veterans with PTSD actually experience,” Mobbs wrote. “Those diagnosed with PTSD are far more likely to isolate, withdraw, and suffer in silence than harm or kill civilians.”

On Thursday, Joey Jones, a combat-wounded Marine veteran and Fox News contributor, criticized Biden for his remarks, telling Task & Purpose that “hearing Biden tell that horrendous story as an example of what veterans suffering from PTSD are capable of or prone to do really undid a decade’s work of removing such a misinformed stigma.”

Immediately after sharing the anecdote, Biden referenced the 600 veterans who died by suicide in Florida this year alone, calling it “devastating,” and adding that “we have to end the stigma surrounding mental health treatment” — a juxtaposition that’s a little hard for some to swallow.

“For me, this is less a tit-for-tat on which candidate says the dumbest thing going into November and much more about a potential [president] propagating a false narrative that’s very harmful,” Jones said.

It’s worth noting that Biden is hardly alone in this. Following the Thousand Oaks shooting, President Donald Trump drew an uneasy link between the perpetrator’s military service, post-traumatic stress, and violence among veterans.

“He saw some pretty bad things, and a lot of people say he had PTSD, and that’s a tough deal,” Trump said. “People come back — that’s why it’s a horrible thing — they come back, they’re never the same.”

During the campaign event, Biden spoke at length about veteran suicide, the costs of war, and the impact it has had on his own family when he shared a story of his late son, Beau, who served a year in Iraq with the National Guard.

“We’ve got to seriously tackle the mental health crisis we have,” Biden said. “A suicide epidemic is claiming far too many of our veterans and service members. One of the saddest things that my son came home… After a year in Iraq, he was back as attorney general. The week before Christmas, he came over to the house. He said, ‘Dad I don’t know what I’m going to do.”

Biden’s campaign did not respond to Task & Purpose’s request for comment.

RELATED: Nine years after losing both legs in Afghanistan, he’s found purpose in family, friends and inspiring others