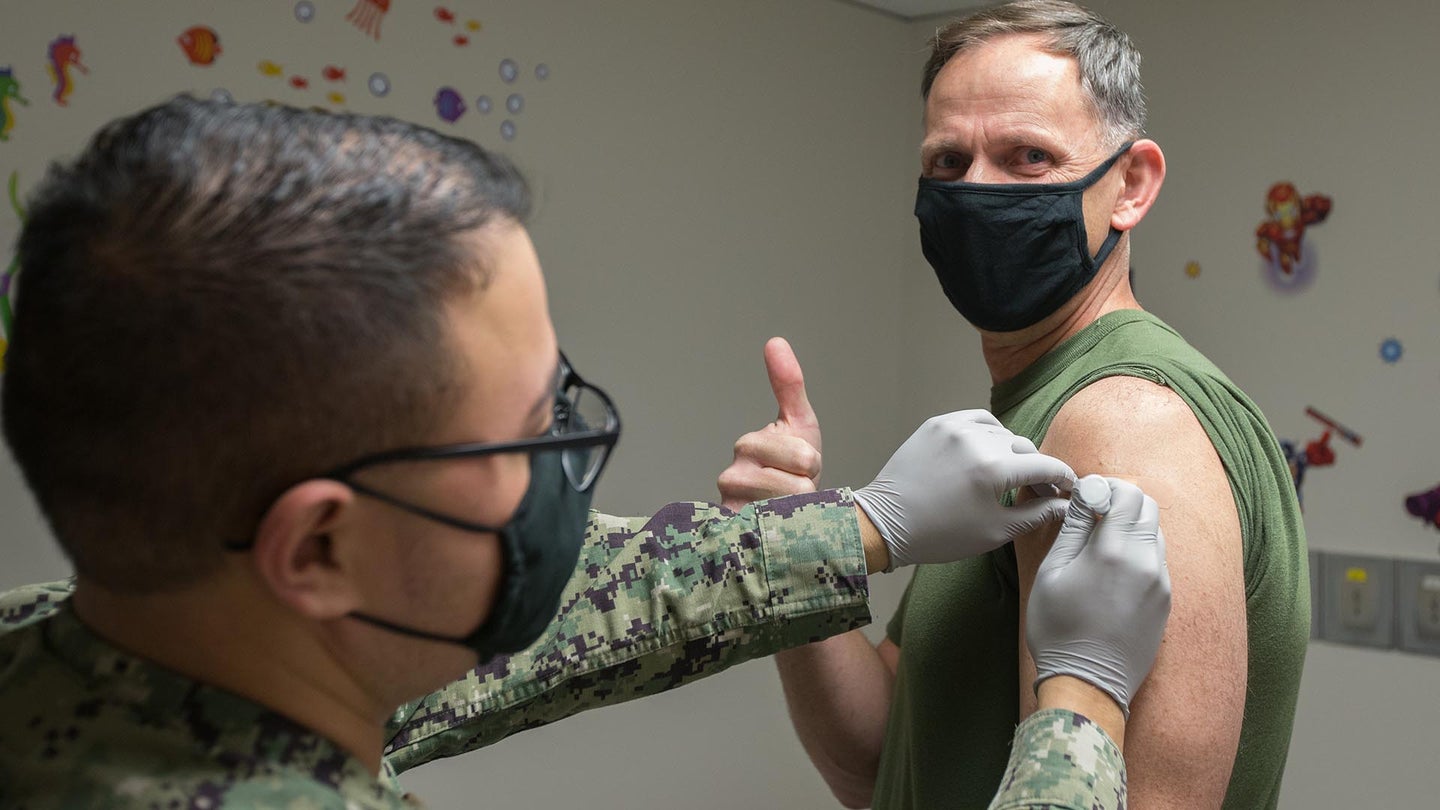 President Joe Biden has ordered the Defense Department to develop a plan to make vaccines for the novel coronavirus (COVID-19) mandatory for all troops.

“Since many vaccinations are required for [the] active-duty military today, I am asking the Defense Department to look into how and when they will add COVID-19 to the list of vaccinations our armed forces must get,” Biden said during a speech from the White House on Thursday.

“Our men and women in uniform, who protect this country from grave threats, should be protected as much as possible from getting COVID-19,” Biden continued, “I think this is particularly important because our troops serve in places throughout the world – many – where vaccination rates are low and disease is prevalent.”

Right now, COVID-19 vaccinations are voluntary for service members because the vaccines have not yet been fully approved by the U.S. Food and Drug Administration. The military services have tried various means to persuade troops to get vaccinated, including battling misinformation about vaccines.

During Thursday’s event, a reporter asked Biden if he believed that Defense Secretary Lloyd Austin would be open to making COVID-19 vaccines mandatory before they are fully approved by the FDA. For national security reasons, the president can ask the defense secretary to require troops to get vaccinated before full FDA approval.

“I know he’s open to it and the question is: When the right time to get the most bang for the buck when you do it,” Biden replied. “A lot of this is timing. And, so I think it’s gonna happen.”

Biden also said he expects the FDA to fully approve the COVID-19 vaccines in the early fall.

Trying to determine how many service members have been fully vaccinated is difficult because the data provided by the Defense Department and the individual military services don’t always line up.

For example, the Defense Department’s website says that 363,626 active-duty, National Guard, and Reserve soldiers have been fully vaccinated, but Army spokeswoman Maj. Jacqueline Wren said that roughly 448,000 soldiers are fully vaccinated according to the service’s records.

It was unclear how the Pentagon and Army could be so far apart on this issue.

More than 62% of active-duty soldiers are fully vaccinated, said Wren, who referred questions about reserve component soldiers to the Army National Guard and Army Reserve.

“At this time, vaccination for National Guard members is a personal decision,” Murphy said. “While we do provide education and encouragement on the benefits of being vaccinated, we do not collectively track their choice as many citizen airmen and soldiers use their private insurance and releasing information could potentially violate HIPPA [the Health Insurance Portability and Accountability Act].”

“If they voluntarily bring information to drill about being vaccinated, we do enter it into their health record,” he continued.

Service members have cited many reasons for not wanting to get vaccinated, such as concerns that the vaccines were developed too quickly. Earlier this year, a noncommissioned officer told Military Times that he and his co-workers “do not want to be guinea pigs.”

Another reason why troops are refusing to get vaccinated is there are very few things in the military that are truly voluntary, a slide posted by Fort Carson in March revealed.  The slide listed the top 12 reasons why soldiers at the post were opting out of getting a COVID-19 vaccine including: “This is the first time I get to tell the Army, NO!”

Like all Americans, troops and their families are also awash in a sea of lies about the COVID-19 vaccines, which have spread more quickly than the disease itself. Adam Rawnsley of The Daily Beast recently revealed that talking points spread by a Russian marketing agency that were meant to discredit western vaccines in Europe have ended up being used in the United States as well.

Of course, social media and cable news have poisoned the public discourse on vaccines – and everything else. Fox News Personality Tucker Carlson has falsely claimed that thousands of Americans who received a COVID-19 vaccine later died. Millions of Americans take every word Carlson says seriously even though a U.S. district judge has ruled that the tenor of his show makes clear to his audience that Carlson is “not ‘stating actual facts’ about the topics he discusses.”

CORRECTION: This story was corrected on July 30 after the Army said that about 448,000 soldiers were fully vaccinated.