"Was asked a question the other day, it was what's the difference between military humor and civilian humor it's simple, it's black. This video should say it all" 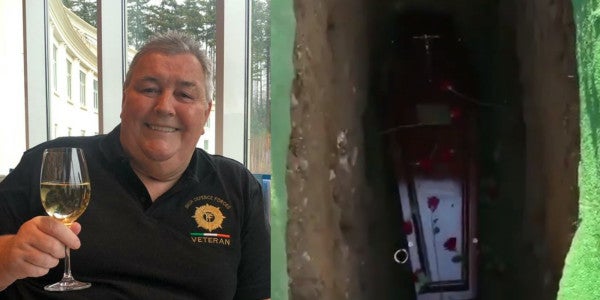 There's a lot to be said about the benefits of military service: the camaraderie, the steady paycheck, knowing the reward of a hard days work. But perhaps most important of all is a solid understanding of the value of gallows humor.

Nobody exemplifies this more than Irish Defense Forces veteran Shay Bradley, who made sure that his Oct. 12 funeral ended not only with sorrow, but also laughter.

At his funeral in Dublin, Ireland, Bradley got the last laugh when his voice called out from inside his coffin: “Hello? Hello? Hello? Let me out!” followed by knocking against the coffin lid.

The audio was pre-recorded by Bradley last year, and his plans for the prank were shared with his son, and grandson, but days before the funeral the details of the gag were shared with the rest of Bradley's children and his wife of 43 years, Anne, according to Huffington Post.

For anyone who hasn’t seen, My grandad was a one of a kind character and has left his legacy for the world to see❤️ #shayslastlaugh pic.twitter.com/POZUZYLHya

According to his obituary, Bradley passed away on Oct. 8 “after a long illness bravely borne,” and the surprise was a way to ensure his loved ones left the funeral in stitches, rather than tears.

“Where the fuck am I?” Bradley can be heard saying in the recording, as attendees begin to giggle and wipe away tears.

“Let me out, it's fucking dark in here,” continues the audio. “Is that the priest I can hear? The fuck!? Let me out!”

Video of Bradley's funeral was posted to the Irish Defense Force Veterans News Facebook page on Oct. 13 , along with the note: “Was asked a question the other day, it was what's the difference between military humor and civilian humor it's simple, it's black. This video should say it all.”

In an interview with Huffington Post, Bradley's daughter, Andrea said her father “wanted to make sure my mam would be laughing leaving the cemetery, not crying. And he done just that.”

In an Oct. 13 Twitter post, Andrea Bradley shared a photo of her late father, writing “here is a picture of the legend himself.”

Here is a picture of the legend himself. My dad, Shay Bradley. It was his dieing wish that we played this at his funeral. What a man…. To make us all laugh when we were incredibly sad….. He was some man for one man…. Love you forever Poppabear #Shayslastlaugh pic.twitter.com/YkG2ecKAaL