"Sir, do you know why I pulled you over?" 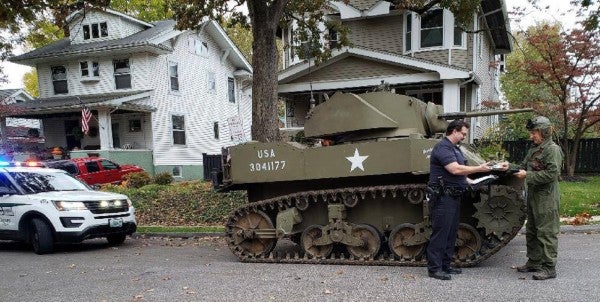 Oh, the day after Veterans Day, when your news feed is spilling over with thoughtful op-eds and reflective essays on the costs of war, life after service, and ruminations on whether or not it was worth it.

It's important stuff, absolutely, but I'll admit that I caught myself thinking: You know, today I could really use some silly news. And behold, the internet giveth:

At first glance it appears that yesterday in the small town of Webster Groves, Mo., a local cop pulled over an M5 Stuart Light tank and gave the driver a ticket.

However, as much as I wish that had happened, it didn't.

While Task & Purpose was unable to get a full explanation from the Webster Groves Missouri Police Department when we called on Tuesday, an operator did tell us that the tank driver was a city resident who was receiving a police escort to a Veterans Day event in town.

Even so, we can dream about how that encounter might have gone down:

Tanker: “Because I'm driving several tons of American kickass on a city street?”

Cop: “No. You failed to use a turn signal, in fact, you have none. You also have no headlights; this thing is spewing out fumes and hasn't passed an inspection since Ike was alive; your registration is dated 1945; and you have six decades of unpaid parking tickets.”

Tanker: “Oh, I'm sorry, I thought this was America.”