No, the US Naval Academy isn’t offering ‘satanic services’ — but not for the reason you think

The U.S. Naval Academy has a message for the burgeoning satanists in its ranks: you can study satan, but you sure as hell can't hail him 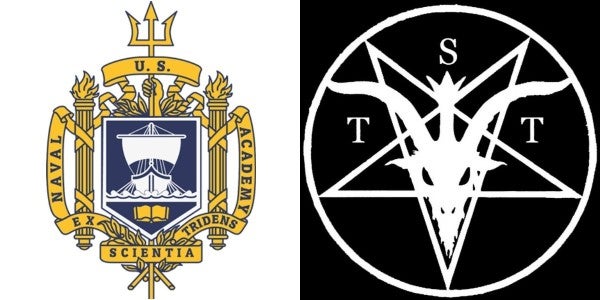 The U.S. Naval Academy has a message for the burgeoning satanists in its ranks: you can study Satan as a midshipman, but you sure as hell can't hail him.

An internal email sent to USNA midshipmen on Oct. 8 and posted to the popular Instagram account Drunk Old Grad the following day appeared to announce that “satanic religious services” based on the philosophy of The Satanic Temple would become available to the student body that week.

But according to a USNA spokeswoman, that email was sent prematurely.

According to Garas, a group of midshipmen “with beliefs aligned with those practiced by The Satanic Temple” (which the U.S. government officially recognized as a tax-exempt religion in May of this year) had requested a space for a “study group” to discuss their satanic beliefs — and not, as the email in question indicated, for holding satanic religious services.

“The USNA Command Religious Program provides for the exercise of diverse beliefs,” Garas said. “Arrangements were being made to provide the Midshipmen with a designated place to assemble as chaplains facilitate for the beliefs of all service members.”

The problem with the request isn't the focus on, well, satanism: it's that The Satanic Temple in particular represents, as Garas put it (emphasis ours), “a non-theistic religious and politically active movement,” the type of which U.S. military personnel are broadly forbidden from engaging with.

“The Command Religious Program at the Naval Academy facilitates the opportunity for the free expression of diverse beliefs, but without endorsing any particular belief, Midshipmen have the right to assemble to discuss their beliefs as they choose,” Garas said. “But, to be clear, in accordance with Department of Defense Policy, military members will not engage in partisan political activities, and will avoid the inference that their activities may appear to imply DoD approval or endorsement of a political cause.”

As of 2017, the U.S. military recognized 221 distinct “faith groups” from major religions like the Roman Catholic Church and Islam to more arcane and esoteric affiliations like Druid, Troth, Heathen, and Pagan.

In January of this year, a group of sailors aboard the aircraft carrier USS John C. Stennis conducted religious services based in Norse Heathenry with the approval of their commanding officer.