"Most believe that it was an accident, as reported" 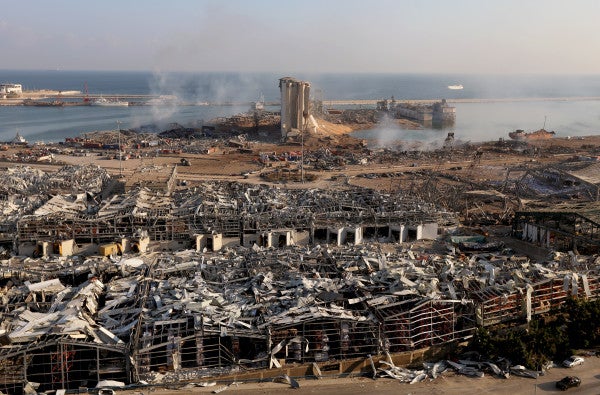 Defense Secretary Mark Esper said that he believes the explosion in Beirut that has reportedly killed more than 130 people was likely an accident, possibly putting himself at odds with President Donald Trump, who has insisted the blast was a “terrible attack.”

“I’m still getting information on what happened,” Esper told the Aspen Security Forum on Wednesday. “Most believe that it was an accident, as reported. Beyond that, I have nothing further to report on that.”

Investigators believe that the massive explosion was caused by 2,750 tons of ammonium nitrate, a highly explosive material that may have been improperly stored for years in a warehouse, according to Reuters.

Nevertheless, Trump told reporters on Tuesday that his military advisors believed the explosion was caused by a bomb.

“I've met with some of our great generals, and they just seem to feel that it was,” the president said at a White House press conference. “This was not a – some kind of a manufacturing explosion type of event. This was a – seems to be, according to them – they would know better than I would, but they seem to think it was a attack. It was a bomb of some kind.”

Trump did not say which general officers he had spoken with. The White House did not provide a comment for this story.

The Pentagon declined to answer questions from Task & Purpose on Wednesday about whether Esper was aware of Trump’s comments that the Beirut blast was an attack – and, if so, whether Esper meant to contradict the president.

“We have nothing to offer at this time beyond the Secretary’s comments,” an unnamed Pentagon spokesperson said in an email.

On Wednesday, Trump softened his stance on whether the Beirut explosion was an attack rather than an accident.

The president also did not appear to be angry when asked about Esper’s comments that the explosion was probably an accident.

“I’ve heard it both ways too,” Trump said during a White House news conference. “I’ve heard accident. I’ve heard, you know, explosives – and obviously, it must have been some form of explosives – but whether it was a bomb intentionally set off, it ended up being a bomb.”

“But no, I’ve heard it both ways,” the president continued. “It could have been an accident and it could have also been something that was very offensive and I wouldn’t be very happy with that.”

UPDATE: This story was updated on Aug. 5 with more comments from President Donald Trump.