UNSUNG HEROES: To Recover A Fallen Soldier, He Attacked With A Weapon In Each Hand

Leave no man behind. In combat, where life and death are determined by a mix of skill, courage, and at... 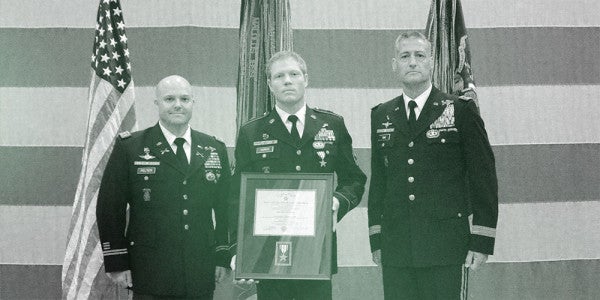 Leave no man behind.

In combat, where life and death are determined by a mix of skill, courage, and at times blind luck, those words are a promise that whatever happens everyone will come home.

That day, Harris and his fellow Green Berets, led by Master Sgt. Danial “Slim” Adams, were searching a contested area near Forward Operating Base Airborne in Wardak province, Afghanistan, for a high-value individual, according to a Department of Defense news story.

Some of the first names of the soldiers with the Special Operational Detachment A, assigned to 10th Special Forces Group have been excluded to protect their identities as they are currently deployed, reports Army Times.

Related: UNSUNG HEROES: The Green Beret Who Killed 4 Enemy Fighters, 1 With His Hands »

Sgt. 1st Class Richard Harris, a special forces soldier with 10th Special Forces Group (Airborne), pauses for a photo in 2012 at Forward Operating Base Airborne in the Wardack Province, Afghanistan.

The heavily vegetated area in the Maiden Shahr District was a safe haven for the Taliban, and afforded insurgents relative freedom of movement. Adams, Harris, and their team members were providing overwatch for a larger force searching the nearby village. After three hours of looking, Adams’ team headed south on all-terrain vehicles to link up with the rest of the unit.

Just as they passed a small cluster of buildings at the edge of the village, they were ambushed by a group of 25 to 30 insurgents armed with AK-47s, PKM machine guns, and rocket-propelled grenade launchers.

Racing through the kill zone, Adams fell from his ATV.

He was shot in the wrist, thigh, and neck. Harris quickly maneuvered his vehicle and found cover between two buildings, as two other team members drove to cover 40 meters away.

Harris opened fire on the attackers with his M4 and its attached M203 grenade launcher, and called out to Adams, drawing the enemy’s attention. An RPG exploded nearby, briefly knocking him unconscious and dislodging his radio earbuds.

Harris got back up after regaining consciousness and undaunted, returned fire. Harris saw Adams’ body nearby — roughly 25 meters away.

“Okay, I know where Slim’s at,” Harris said, in the Army news release. “I can’t find the rest of my team. I need to go and get Slim. … I remember my legs and knees were just shaking and knocking uncontrollably and I couldn’t stop it. … I was basically preparing myself to die.”

Despite Harris’ incredible efforts, Adams had succumbed to his wounds.

An F-16 strafed the area, coming within a few meters of Harris’ position, but the 500-pound bomb it dropped wasn’t enough to break the enemy attack. Harris contacted his team, and made his way to their position.

Identified only by his rank and last name in the Army news release, Sgt. 1st Class Bell later described Harris as “exhausted as I've ever seen a human being be.”

Though he was pushed to the limits of human endurance, Harris wasn’t done.

Sgt. 1st Class Richard Harris (2nd from right), a special forces soldier with 10th Special Forces Group (Airborne), stands in front of a memorial with other members of his Special Forces Operational Detachment Alpha to pay respect and honor his fallen team sergeant, Master Sgt. Danial “Slim” Adams, who was killed in an ambush on Sept. 13, 2011.

With the Green Berets bolstered by three truckloads of reinforcements led by Staff Sgt. Millan, whose first name was omitted from the Army news release to protect his identity, Harris went back to keep Adams’ body from being taken by the enemy.

Under fire, Harris and Bell, ran to one of the ATVs that was carrying a 60mm mortar system, which they used to fire off eight rounds, and then another 500-pound bomb was dropped from an F-16 on the enemy position. Harris and Bell mounted up and rode to another position to drop off the weapon to fellow soldiers, before racing back to recover Adams, with Milan now following on foot.

When they arrived at Adams’ position, still under fire, they received word that another 500-pound bomb was incoming, and all three men leapt atop Adams’ body to cover him. It exploded 80 meters away. An interpreter ran to help the three men load Adams onto the ATV.

Once the team members and their interpreter had Adams, they left the kill zone together.

Five years later, Harris, now a sergeant first class, was awarded the Silver Star on June 3, for his actions that day during a ceremony at Fort Carson, Colorado.

“Everything that I've ever learned and trained and had beat into my head was that you never leave a fallen comrade,” said Harris. “And that's exactly what Slim was.”