UNSUNG HEROES: The Military Dog Who Saved 4 Lives In An RPG Attack

During a brutal firefight in Afghanistan, Valdo, a military working dog, and his handler, Navy Petty Officer 2nd Class Ryan... 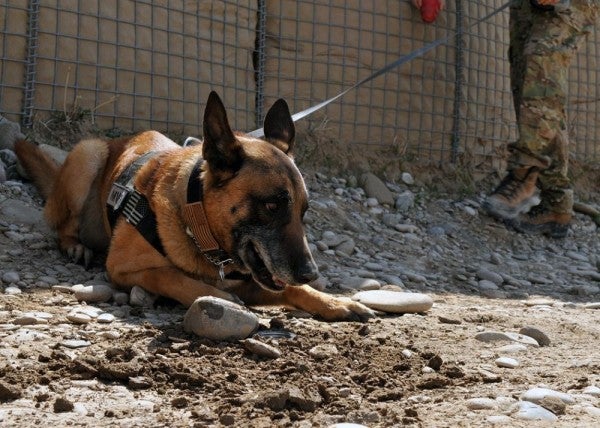 But their efforts came at a heavy price.

While participating in Operation Red Sand, Lee and Valdo were attached to the Army’s 7th Squadron, 10th Cavalry Regiment, and went on numerous joint-service patrols, sniffing out roadside bombs and engaging with key leaders in the community, reports a May 2014 Department of Defense press release.

On April 4, 2011, Lee and Valdo were on an 11-man patrol in the Bala Murghab district of Badghis province, across a dusty field when they came under heavy attack by a large enemy force.

As enemy fire raked their position, the patrol took cover in dilapidated ruins nearby, but a barrage of rocket propelled grenades began descending on them. One detonated in the middle of Valdo and four others, seriously injuring the military working dog and peppering Lee, Army Sgt. Jeff Sheppard, Pfc. Ben Bradley, and Air Force Tech. Sgt. Kevin Wallace with shrapnel.

Related: 10 photos that prove the military wouldn’t be the same without its military working dogs.

As Valdo howled in pain from a massive wound in his colon and shrapnel injuries in his hind legs and tail, Sheppard screamed for the patrol’s medic, Army Spec. Kellen West.

Even with a critically wounded military working dog and four injured men, the patrol pushed through the enemy attack without resupply or reinforcement.

“That was a handler’s worst nightmare,” said Lee. “When that RPG came in and exploded next to us, all I could think about was how to get Valdo off that field. His screams were jolting and I knew I had to get him to safety, and felt helpless because there was nothing I could do with the amount of incoming fire.”

Valdo was carried almost a mile and a half south to Combat Outpost Metro, where he was treated by West, before being evacuated to Forward Operating Base Todd, wrote according to a Feb. 2015 article on Examiner.com. After he was stabilized, Valdo was sent to Camp Arena in Herat for further treatment.

“If Valdo wasn’t here, I’m pretty sure I’d be dead right now,” said Army Pfc. Ben Bradley, who was dug into a firing position just feet from Valdo and sustained minor injuries during the attack.

While Valdo’s wounds marked the end of his service, Lee said he planned to adopt him.

“He’s a tough dog and made it, though,” said Lee of the ambush. “As much as the platoon owes their lives to Valdo, he owes his life to Spec. [Kellen] West and the other men who carried him off that field and got us on the medevac helicopter to safety.”

Watch the Department of Defense video on the patrol and Valdo’s recovery.