GI Joe Was Designed To Be A More Badass Ken Doll

For those who grew up playing with G.I. Joes, one thing was immediately clear: Our action figures were a hell... 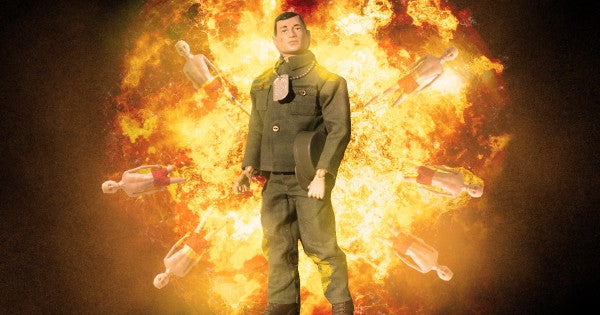 For those who grew up playing with G.I. Joes, one thing was immediately clear: Our action figures were a hell of a lot more badass than Barbie’s kerchief-wearing counterpart, Ken.

In 1964, the toy company Hasbro made waves at the New York Toy Fair when its president, Merrill Hassenfeld, announced the launch of a new toy for boys.

Related: What It’s Like To Be A Marine, According To An Action Figure »

Officially the first action figure made in America, G.I. Joe was a new breed of toy.

The 12-inch tall doll reported for duty on Feb. 9, 1964. Inspired by a wooden sculptor's mannequin, it could bend at every joint. G.I. Joe was muscular, broad shouldered, and sported a scar on his right cheek.

The reason? It made him look tougher than Ken.

According to Donald Levine, who is heralded as the father of G.I. Joe, the action figure’s legacy as a tougher, manlier version of Ken, and a better potential partner for Barbie (at least in the eyes of adolescent boys), endure for years after it first hit shelves.

In a 1996 Washington Post article, Levine said that “every place I go … guys say to me, ‘You don't know what my GI Joe did to my sister's Barbie doll.’”

The disparity between Ken and G.I. Joe even inspired this 1996 Nissan commercial.

Hasbro announced that the face of G.I. Joe was a composite of 20 Medal of Honor recipients; however, this is believed to have been a marketing ploy, according to Rick Beyer, in his book “The Greatest War Stories Never Told.” Many on the design team felt the sculptor, Phil Kraczkowski, who had done numerous busts of President John F. Kennedy, incorporated some of the president’s features into the doll.

When it was released, G.I. Joe took the country by storm, invading American homes and storming sandboxes with a platoon’s worth of Joes, as seen in this 1960s television advertisement.

Though the original 12-inch-tall G.I. Joe model was retired in 1978 following the Vietnam War, the toy returned to active service in the 1980s in the form of a smaller action figure, the oneimmediately recognizable to millennial adults today. This newer G.I. Joe spawned a cartoon television show during the 1980s, and the action figure has remained on shelves ever since.