6 Things We Learned By Watching Arnold Schwarzenegger Work Out

Editor’s Note: This article written by Zach Watson was originally published on Greatist, a digital publication committed to happy and... 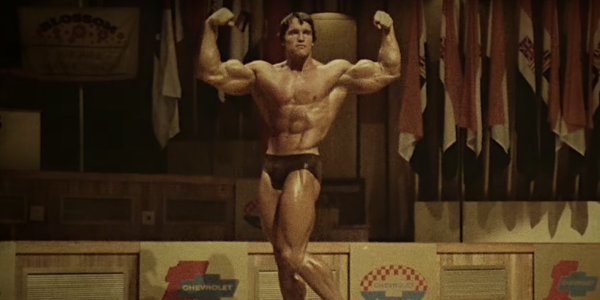 Editor’s Note: This article written by Zach Watson was originally published on Greatist, a digital publication committed to happy and healthy lifestyle choices.

Arnold Schwarzenegger recently live streamed 30 minutes of his daily workout to promote his newest venture, a t-shirt (and fitness movement) called “Come With Me If You Want to Lift.” The live stream is a lot like Terminator Genisys — not really worth watching, except for a few golden scenes. So instead of sitting through the whole thing (though we did include the video below for die-hard fans), check out Schwarzenegger's six best nuggets of advice.

The former governor of California frequently referenced his hatred for ending a lift before fully extending the muscle: “Go all the way up. None of these half-reps. That's bullsh*t.”

2. Exhale as you exert yourself.

This is classic advice. It's important to be deliberate with your breathing while working out.

3. There's no such thing as the weaker sex.

We were pleasantly surprised by Schwarzenegger's feminist stance, though he did make this comment in regards to doing a pose-off with the person you're sleeping next to.

4. Work out your abs every day.

Do you sleep every day? What about eating breakfast? According to Arnold, abs are also a daily necessity.

5. We all have uncontrollable urges.

Yes, Arnold sometimes yells, “GET TO THE CHOPPA!”

6. Beer is better for you than milk.

“There is nothing that milk has that you really need,” Schwarzenegger says. “I tell you, there are more nutrients in beer than in milk.” That claim is a little far-fetched. Beer does have nutrients, including B vitamins and potassium, but milk can be a good source of calcium.

This article, “The 6 Things We Learned While Watching Arnold Schwarzenegger Work Out,” originally appeared on Greatist.