6 Tips For Staying Sane And Fit When You’re Injured 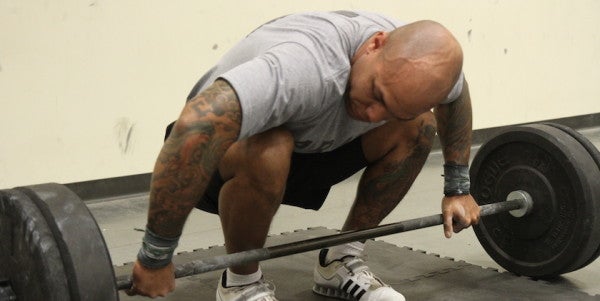 When I first met CrossFit competitor and National Pro Grid League athlete Jamie Hagiya, she was in a walking cast and using crutches to get around. Sitting on the floor of her CrossFit gym in Torrance, California, we traded injury stories. I grumpily complained about a knee surgery from the previous year that requires modifying certain workouts and foregoing others entirely to accommodate my bum knee. Hagiya cheerfully told me how excited she was to get back to her normal routine, noting a serious silver lining to her injury: It gave her the chance to work other muscle groups, not to mention rest and recover.

Hagiya’s grounded perspective and optimism made me think her surgery was in the distant past, but it turns out she had ruptured her Achilles tendon just over one month prior to meeting. It happened while completing a set of box jump-overs at her first ever National Pro Grid League (NPGL) match and not only ended her NPGL season, but also suspended training for upcoming CrossFit competitions and curtailed her ability to coach classes at her gym.

Besides the pain and limited mobility, dealing with an injury that derails your normal routine can be emotionally grueling. After all, you're being denied an activity that provided some measure of release or relaxation, while also worrying that your fitness level is on a steady decline. Unfortunately anyone who lives an active lifestyle is at risk for pulls, tears, and fractures (whether you’re a runner, CrossFitter , or just a weekend flag footballer. So it seems likely that many of us could stand to benefit from what Hagiya has figured out: How to stay fit — physically as well as mentally — while injured.

As for Hagiya’s personal plan to get through it all: “I am going to take things slow and build back up. With hard work and effort and dedication, you’ll get back to where you were. Some people say even stronger.”

Obviously when you’re sitting out, your fitness level and endurance take a hit. I know that I am not going to come back and get all the numbers I was getting before I was injured, but that's part of the rebuilding process. This is an opportunity to rest and give your body a break.

To have to sit out that long, to know that your progress as an athlete has come to a stop, there will be days where you just break down and cry thinking about everything. But it’s OK to feel that way, let yourself get it out. It’s part of the healing process.

3. Get back to working out as soon as it’s safe.

There’s always a way to work around your injuries. After surgery I waited a week or so and then I was back in the gym doing stuff—anything that didn’t put weight on my foot or anything crazy that would make me sweaty. I’ve been in a cast, but after it’s off, I’ll hit it harder.

The people in my gym, the people in CrossFit, and the fitness community have been so awesome and so supportive. So many people reached out to tell me, “You’ll be fine. You can get through it.”

Being in the gym honestly helped me—just watching and observing. It’s cool and inspiring to see people work so hard. They’re not competing for anything. They’re doing it because they want to be there. That helps keep me positive.

Someone told me, “You get one chance to heal. Do it the right way. Don’t push it by doing things that could aggravate your injury even more.”

This article, “How to Stay in Awesome Shape (and Totally Sane) When You're Injured,” originally appeared on Greatist.