Few Things Bring Together Vets And Civilians Like Misery Of CrossFit

On the morning of Memorial Day, I found myself soaked in sweat, laying flat on my stomach, head-pounding, arms shaking... 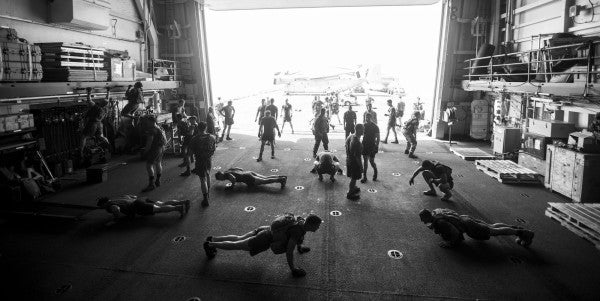 On the morning of Memorial Day, I found myself soaked in sweat, laying flat on my stomach, head-pounding, arms shaking as I closed in on finishing the prescribed 200 push-ups. I was not alone. Surrounding me in the austere and sweltering warehouse-like gym were a few dozen people, all battling the heat to labor through hundreds of push-ups, pull-ups and air squats, bookended by mile-long runs.

Who were these people, and why were they spending what could be a lazy holiday morning putting themselves through an experience that certainly did not appear to be enjoyable – given the grunts, curses, rivers of sweat, and variety of tortured grimaces? It was not a random assembly of masochists — well, perhaps a few were — but rather was a group of CrossFit enthusiasts participating in the Memorial Day Murph, an annual tradition in which CrossFitters across the country put themselves through an especially grueling workout to honor the life and sacrifice of Medal of Honor recipient Lt. Michael Murphy.

The evolution of “The Murph” into a Memorial Day tradition in its own right illustrates a nearly-decade long phenomenon; namely, the rise in popularity of CrossFit among military service members and veterans. This trend is well-known within the military community to the extent that, just as in the civilian world, there are those who would prefer to never again have to listen to someone boast of their “Fran” time.

What has gone less noticed, however, is the manner in which CrossFit has been helping to bring together civilian and military populations. Gallons of ink have been spilled lamenting the fragmentation in our society between the “1%” who have served in the war on terror and the “99%” who have not. Less attention has been paid to activities that bring these groups together in healthy and mutually uplifting ways.

CrossFit is one of them. Every day in spartan industrial buildings across America, veterans gather alongside like-minded civilians to push themselves physically, lifting heavy weights, swinging kettle bells, and tossing medicine balls.

Related: 7 Myths that make everyone hate on CrossFit »

What is the appeal? Chad, 33, a veteran of the Air Force special operations community, and William Walker, 47, who served 20 years as an infantry master sergeant in the Army before going on to coach and compete nationally in Crossfit, use identical language to capture an important element of the attraction: “Misery loves company.”

Walker compares some of the more demanding CrossFit workouts to military training where “everyone realizes this sucks, but that you are in it together, so you just laugh and drive on.” This mentality has been so deeply ingrained in some veterans that it makes sense they would look for physical challenges to overcome, albeit in limited doses. Obviously not all veterans share this desire. Some are quite happy never doing another push-up, and they have surely earned that right. But for those who want to, CrossFit enables them the ability to again fulfill the desire to “dig deep” and conquer physical adversity, but in a tolerable one-hour block before a refreshing shower, good meal, and return to the comforts of civilization.

CrossFit, and some of its functional fitness cousins, has also revealed the extent to which some civilians share this hunger to subject themselves to punishing workouts in a group setting. Some are former college athletes looking for another outlet to compete in, while Walker points out that for others he helps train, it might be the first time that they were in a community that encouraged them to push past what they thought was their physical breaking point. He says it can be “an epiphany for a lot of people when they realize they are capable of more than they thought.”

One of the more distinctive aspects of many CrossFit communities is the genuine respect participants seem to generally have for each other. There is a fleeting taste of the camaraderie forged through shared discomfort that is too often absent from contemporary life, but has characterized militaries for millennia.

Under Secretary of the Army Patrick Murphy, an active CrossFitter, agrees that CrossFit is conducive to forging a connection with the people you are doing it with. “When doing PT in the Army, there's a shared sacrifice and basic connection you make with your fellow warriors. You're pushing each other to get better,” Murphy told me in an email. “Personally, I've found similar bonding with folks in my CrossFit box and we all come from different walks of life.”

Under Secretary of the Army Patrick Murphy practices PT for Army's #EarnYourCake campaign.

This is a critical ingredient to CrossFit’s ability to bridge the civil-military divide. Physical prowess is one of the most admired attributes in the military, and when proud veterans see civilians smoking them in a tough workout, it can be a humbling, yet valuable, experience. They are no longer put up on a remote pedestal, an abstract “hero” politely cheered by strangers at a ballgame, nor are they pitied as damaged goods. Rather, they are engaged in healthy competition with a worthy opponent. When the mission is to lug a sweat-covered 45-pound plate 400 meters, sharing the burden with your partner, it does not matter whether you are a combat veteran or an accountant. You simply need to pull your weight. If you do, as you cross the finish line and kneel on the ground next to each other in exhaustion, gasping for breath, you will feel some pride in having completed the workout together.

Chad, the former Air Force special operator, says, “Nobody goes into Crossfit because they want to slouch. Nobody is there to just go through the motions, get on the elliptical and watch the Kardashians while keeping their heart rate at 130 for an entire show. As a veteran, working out is a lifestyle that has been ingrained in me. But for the civilian, they are just doing it to better themselves every day, and I respect that.”

This sense of community can exert a powerful appeal to veterans who feel unmoored — stripped of the sense of belonging to a small group that lives, works, and sometimes fights together. In his new book, “Tribe: On Homecoming and Belonging,” Sebastian Junger discusses some of the psychological challenges that can afflict veterans, which, though they can have a variety of causes and effects, are often clumsily lumped together under the rubric of post-traumatic stress disorder. Junger argues that for some veterans these issues have as much to do with a sense that they have been abruptly cast out into an indifferent society, after having belonged to such a close-knit “tribe,” as with exposure to a particular trauma. While a fraternity of recreational athletes cannot really approximate one of soldiers, I was still struck by how, as the “Murph” finishers all clustered together for a quick photo, the endorphin-fueled sense of communal satisfaction reminded me of some of the fonder memories I had of the military.

There is also some evidence that exercise can help with PTSD. Junger laments the fact that a diagnosis of PTSD can sometimes lead to a sense of powerlessness, born of the fear that one has been consigned to a lifetime on the sideline due to a debilitating and irreversible psychological wound. While I am not a mental health expert, there is no doubt that it is empowering to see oneself getting fitter, faster, and stronger. Furthermore, the notion that exercise can elevate mood, reduce anxiety, and improve the self-esteem of those struggling with PTSD is referenced by the Department of Veterans Affairs, as well as in numerous medical studies.

Is CrossFit perfect? Of course not. It can be very expensive, for one, pricing out lots of veterans who can’t fork over $200 a month for the privilege of swinging a kettle bar or climbing a rope. Is it the only activity that can bring together civilians and veterans in the pursuit of fitness and health? No again. One can point to lots of others: distance running, adventure races, mixed-martial arts, and any number of recreational sports come to mind.

But CrossFit’s foothold in the military community appears to be here to stay, and the fact that its participants gather together nearly every day at the same time, generally competing with the same people, is rather unique. Friendships — and healthy rivalries — are formed. Most CrossFit gyms provide discounts to service members, while many also partner with veterans charities and organizations like Team Red, White & Blue, with whom they will co-host free workouts in an effort to further the group’s mission of “enriching the lives of America's veterans by connecting them to their community through physical and social activity.”

Walker, in a manner becoming a gruff former infantry master sergeant, acknowledges that, “CrossFit is not the only way to good fitness. There are plenty of badasses who don’t do it.” But, he pauses, before adding, “I’ll never stop doing it until I am pushing up daisies.”

Until then, for at least an hour a day, he will discover an odd form of serenity amid the cacophony of weights crashing and jump ropes skipping, one of many veterans and civilians across the country who gather together to escape sometimes numbing daily routines and paralyzing digital distractions, happy to be deposited into a more primitive world where the sole objective is to overcome the temptation to slow down or quit.