It was a life-or-death moment on the San Diego-Coronado Bridge Monday when a Naval aircrewman pulled over to stop a... 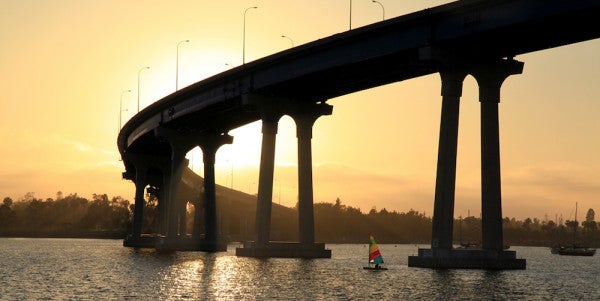 It was a life-or-death moment on the San Diego-Coronado Bridge Monday when a Naval aircrewman pulled over to stop a man from leaping into the bay.

As the two struggled, the 21-year-old screamed for someone to help him. Dozens of motorists whizzed past, until a nurse stopped, and calmed the man down until authorities arrived.

As Coronado police, paramedics and the California Highway Patrol took over, the sailor and the nurse were urged to get back in their cars and off the bridge. They didn’t have time to exchange names.

It took a social media forum to reunite them hours later.

The nurse, who couldn’t be reached for this story, posted a message to the unknown Navy man on Reddit, an online bulletin board where users submit topics of discussion, then rate their popularity.

She addressed her post to “the Navy dude who prevented a suicide on the Coronado bridge today.”

“I was the nurse who stopped. After the police came, I felt like we were (shooed) away. I regret that I didn't get a chance to commend you for what you did today.” She described his lack of hesitation in trying to help another person, despite the potential risk to himself as “extraordinary.”

“I want to be perfectly clear, you almost certainly saved someone's life today. As a nurse and a human person, I'm really grateful that you were there to help.”

She had no way of knowing if he would find her comments, but his roommate did, and alerted him. The aircrewman posted a message back to the nurse.

“That was me! Hey Nurse! I’ve been commending you all day! I had no idea what to say to this man except for holding him so he couldn't do it. When you came I was so relieved you knew how to talk to him and calm him down. With all the adrenaline pumping, I was glad to have someone like you there. Thank you so much for stopping to help when so many people just drove on by!”

Petty Officer 3rd Class Nick Pisano told the San Diego Union-Tribune Tuesday that there was no way he was going to let the man jump.

“I made sure I had a good grasp on his arm so he couldn't make his way closer to the ledge,” the native San Diegan said. “He was making it very clear that he wanted to end his life, and I did what I could to make sure that didn't happen.”

Pisano didn’t think to grab his phone in his haste to get to the man, so he started waiving down motorists, hoping someone would help. He didn’t even notice the nurse until she was at his side.

“She went right at it,” he said. “She was cool, calm, collected and knew exactly what to say him.”

The nurse wrote that she saw the elderly man and thought she was stopping to help in a medical emergency. “I thought I was going to be doing CPR, not talking someone off the ledge,” she wrote.

“It was a powerful moment to be able to talk to her about what happened,” he said.

The man had gotten out of his truck mid-span on the bridge, some 200 feet above the San Diego Bay, and that other vehicles had also pulled over. A Coronado police officer got there before the CHP, and blocked the right lane.

When it was over, the Coronado officer drove the man to an ambulance crew waiting at the toll plaza on the Coronado side of the bridge. He was taken to a hospital, Corbin said.

A CHP spokesman said the man who tried to jump is 82, and was taken for a mental health evaluation.

“I encourage anyone not to be a bystander,” Pisano said. “It's really important when you see something that doesn’t look right to stand up and not keep going on with your life. Take a moment to understand the situation, and you might potentially save someone's life.”

The Reddit exchange drew more than 100 comments from other users. Most praised the two for their fast work.

“I just want to say well done to you both,” wrote one person. “Great to see some of the best of humanity and awesome that you found each other.”

And another posted, “A little bit of humanity is restored. Thank you for being upright citizens and the display of civil courage.”

The San Diego-Coronado Bay Bridge has been the site of roughly 300 suicides from 1960 to 2015, according to information from the county Medical Examiner’s Office and other organizations that track suicides. Fifteen people died in jumps from the bridge in 2015. There have been nine bridge suicides so far this year.

The deaths have spurred a group of local residents to explore the feasibility of installing some kind of barrier, such as netting, on the bridge to deter jumpers. The Coronado Bridge Collaborative was formed to push for a study on what type of barrier would be effective.