The military personnel system is frequently credited with the oft-cited “brain-drain,” the Defense Department’s longtime problem with personnel retention. Many... 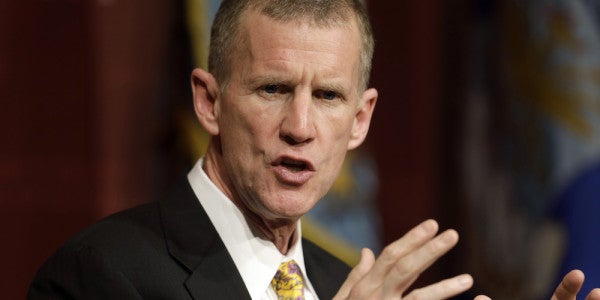 The military personnel system is frequently credited with the oft-cited “brain-drain,” the Defense Department’s longtime problem with personnel retention. Many believe that the military loses its best performers to private industry due to its rigid personnel process.

Usually, these discussions are long on problems and short on solutions. Recently, though, retired Army Gen. Stanley McChrystal, known as a man who’s been around, discussed one possible solution in an interview with the Washington Post.

McChrystal recommended that the military allow direct commissions of certain people, give them some initial training, and bring them into senior positions.

“They'd step in and it would be seamless — because they solve problems and they lead people,” McChrystal said. “Take Brad Smith from Intuit. He could be brought in as a three- or four-star general in the military, and he'd be value-added at the end of the first week.”

Bringing in a high-level leader who’s never served in the military would certainly shake things up, perhaps most notably within the power politics played by generals and admirals. There would be major challenges. The military is one of the most insular subcultures of American society. Outsiders would have a hard time fitting in with both their new peers and their subordinates, neither of whom would feel that some high-powered former CEO has endured the sacrifices and hardships one normally endures to reach such a position.o

By way of example, former Marine commandant Gen. James Amos received a lot of underground criticism for not having a Combat Action Ribbon signifying participation in ground combat, despite a distinguished 42-year military career. One can only imagine the type of reception a CEO might get if his only time deployed was in a villa in southern France, no matter how talented he may be.

It’s appropriate that McChrystal is the one proposing more lateral entry. He has an extensive background in special operations, having served in Special Forces, as a Ranger, and as head of Joint Special Operations Command. In that type of work, performance and expertise often matter more than rank. He understands that sometimes one has to put ego aside and just get the right person for the job.

Bringing individuals directly into the military at high ranks would harken back to an earlier era in American military history, but it’s something that’s no longer done. Warfare today is more technically demanding than it was up until the beginning of the 20th century, when a man who could raise a battalion could lead that battalion. For many combat arms and operational commands, bringing in someone with no direct military experience might not work well.

Nevertheless, for certain jobs and certain projects, McChrystal’s idea has a great deal of merit. The military could give a superstar the resources and authority to tackle a troubled command or a particular major project. Who wouldn’t accept his aforementioned Brad Smith to revamp the military’s information technology? Sailors and Marines who’ve dealt with the infamous tech platform Navy Marine Corps Intranet, called NMCI, or “Non-Mission Capable Internet” would certainly agree. For that matter, I’d give Amazon’s Jeff Bezos a chance to revamp military acquisitions or FedEx’s Fred Smith a shot at logistics. While obviously some of these individuals would have no interest in serving, others might decide that a new challenge and the opportunity to serve might be worth it.

Even at lower ranks, bringing in some top talent could bring new ideas and expertise into the mix. There are more people than one might think who want to serve, but who may think they’ve missed their window. These are people at the top of their games. Telling this pool of talent, “Tough luck, should’ve joined 10 years ago,” is leaving a lot on the table. The services should take a closer look at what fields can employ direct commissions, looking beyond the usual medical and engineering fields into others with civilian analogues, such as logistics, maintenance, even some flying jobs. This could be to an active duty or the reserves. Warrant officer and specialist ranks could also be targeted.

In the long run, the most productive way to shake things up will be a hybrid approach. Just as we can allow a limited number of civilians in at levels above the ground floor, we can balance that out by allowing, even encouraging, people to leave the service and come back later. Currently, “broken time” is usually a career death sentence. It happens when someone gets out and has regrets when things outside aren’t as easy as he or she planned. We need to tell our best performers that they can go out, take a break, get varied experiences, and still be welcomed back in later.

The military is one of a very small number of institutions today that still demands a full career of unbroken service. There is a place for this, but there’s also a place for a personnel model that’s more dynamic than it’s been in the past, just as the world is. With any luck, McChrystal’s idea is just the leading edge of a more sweeping change.