Don’t Let Foreign Interpreters Who Supported Troops Get Left Behind

The email I had been waiting for reached my inbox while I sat in my office at Fort Bragg on... 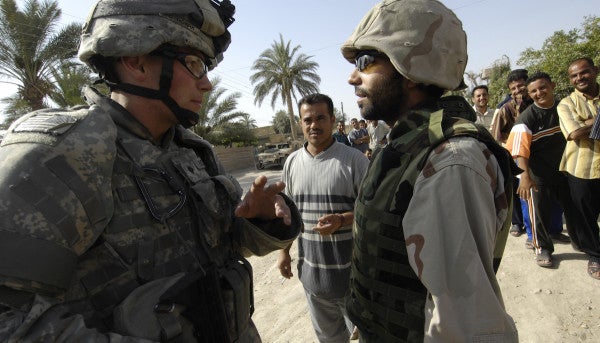 The email I had been waiting for reached my inbox while I sat in my office at Fort Bragg on a brisk autumn day in 2009. “Dear Captain, my new address in Tennessee is…” it read.

Mike was one of eight Iraqi interpreters my unit employed during our 15-month tour at the height of the surge of U.S. forces in Iraq. That message marked the culmination of an 18-month effort by two senior military officers and a half-dozen others working to get Mike out of Iraq. We ensured that Mike’s application, under the special immigrant visa program for interpreters, would not get lost. After he had received numerous death threats, we knew his life depended on how quickly we helped navigate him through the bureaucratic process.

Unfortunately, Mike’s experience is common, except for the part where he got here safely. Thousands of deserving interpreters are stranded. There are 1,800 Iraqis currently living in bureaucratic purgatory while under constant threat of assassination. Even more appalling, 6,000 Afghan applicants awaited resolution as of last summer. It’s time we repaid our debt to these brave individuals — many of whom saved American lives at great risk.

Mike’s success story is counterbalanced by the reality facing “Yousif” (a nickname used to protect him), another one of the interpreters who served with us. After U.S. troops left Iraq, Yousif knew his life was in danger. In early 2013, he started the application process. Yousif was marked for death not only for his cooperation with Americans, but also because he is Yazidi, a sect that Islamic State extremists are determined to exterminate. Yazidis have been mercilessly persecuted and systematically slaughtered since the Islamic State started making its barbarous advance across northwestern Iraq.

Last year, Yousif and his family fled from Mount Sinjar, stalked by fighters along the way. Thousands of Yazidis were massacred. Women and children were sold into slavery. Yousif’s brother-in-law is still missing and we fear the worst. After escaping Sinjar, Yousif, his wife, two daughters, and son wound up in a refugee camp in southern Turkey, living in an austere tent. They left their possessions and home behind.

In May of this year — more than two years since he started the process to come to the U.S. — after relentless efforts by a team of pro bono attorneys, military officers, and officials from the Iraqi Refugee Assistance Project and Defense Department’s immigrant visa clearinghouse, Yousif received word that he would be interviewed for his visa.

Despite the progress, it is hard not to notice that the normally upbeat and resolute Yousif seems more and more pessimistic. A few months ago, Yousif sent pictures of what appeared to me to be Easter Egg baskets. “This is what we do for Yazidi New Years celebration, although we can’t do it this year,” he said. Sometimes, even though we’re doing the best we can for him and his family, our efforts can feel empty.

There are more refugees and internally displaced persons around the world right now than at any time since World War II — more than 51 million, according to the United Nations High Commissioner on Refugees, greater than the populations of California and Pennsylvania combined. The need for America to live up to its reputation as the shining beacon of hope has never been greater. Yet for Yousif, like many other refugees and other asylum seekers fleeing unimaginable violence, destruction, and persecution, the average wait time according to the State Department’s own statistics is between one year and 18 months. In fact, wait times are so beyond the congressionally mandated nine months that several applicants sued the federal government.

Despite broad, bipartisan agreement that we should honor our commitments to those who’ve served, not much visible progress has been made. We can take the first step to properly honoring those commitments by ensuring resources are put in place to process applications and clear the backlog within the next six months. We just sent a probe to Pluto — surely we can process paperwork more quickly.

America was built by those who escaped political and religious persecution. These brave interpreters are not only being persecuted, but they have shown loyalty to a country they’ve never known. Let’s give them a chance to find out what it is that makes America so special. As the inscription written by Emma Lazarus reads at the base of the Statue of Liberty, “Send these, the homeless, the tempest-tost to me, I lift my lamp beside the golden door!” Their tales, like so many of our relatives and ancestors, are deeply woven into the fabric of American life and history. One day, we hope soon, Yousif and his family will arrive here in the U.S. where he knows that he’ll find a better life — that golden door.