The Jeep Is 75 Years Old And Tougher Than Ever

War is one of if not the most effective agents of invention. And World War II, being the greatest conflict... 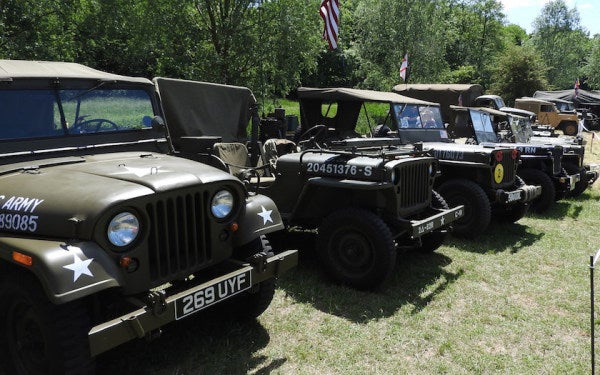 War is one of if not the most effective agents of invention. And World War II, being the greatest conflict in global history, gave rise to industrial, technological, and mechanical advancements in a way that no era had witnessed before. It heralded the age of the computer, brought about nuclear warfare, and gave us a vehicle so iconic, and so badass, that we still drive it today: the Jeep.

During World War I, the world’s strongest militaries made moves to mechanize. Automobiles, as a result, became a big part of that. In order to stay competitive, the U.S. Army developed four-wheel drive trucks with the help of Four Wheel Drive Auto (FWD) and the Thomas B. Jeffery Company. And while those vehicles, known as the Marmon-Herrington converted Ford 1/2 ton truck, sufficed for the first world war, they would not be advanced enough for the second.

Shortly before the start of World War II, the Department of War decided it would require a light reconnaissance vehicle. It started out by soliciting 135 manufacturers in 1940, including Ford, American Bantam Car Company, and Willys Overland Motors. Bantam won the bid as the only company that claimed it could deliver a preliminary model in 49 days and production examples in 75.

But because of financial issues, Willys ultimately piggybacked off the Bantam pilot design to win the Army’s contract. However, because the War Department needed a higher volume of production in a relatively short time, Willys gave the United States Government a non-exclusive license, which allowed Ford to manufacture vehicles with its design.

Thus the first General Purpose vehicles were born: The Willys Quad and the Ford “Pygmy.” Though the etymology is debated, lore suggests that General Purpose or G.P. was slurred to “jeep,” and the name stuck. However, this can’t be confirmed.

When the war was over, the market for automobiles opened up and presented a huge opportunity for Willys to sell the now famous Jeep to civilians.

The CJ-1, or Civilian Jeep 1, was fielded in May of 1945. It would eventually undergo seven iterations before being replaced in 1987 by the wildly popular Jeep Wrangler that we still see produced today.

But during those three decades, ownership of the civilian Jeep brand changed hands numerous times. Willys Overland was sold to Kaiser Motors in 1953, which became Kaiser-Jeep a decade later. With profits falling, American Motors Corporation then bought it out in 1970, which was able to stabilize the brand before it was purchased once more by Chrysler Corporation.

But the military branch of the Jeep empire remained separate. In 1971, it was placed under American Motors Corporations government segment AM General. And although the civilian segment was bought by Chrysler, AM General maintained the military Jeep brand. Then in 1979, the company leveraged Jeep capability into the High Mobility Multipurpose Wheeled Vehicle, known to most service members today as “the Humvee.”

While the Humvee was ousted in 2015 by Oshkosh’s Joint Light Tactical Vehicle because of the Army’s need for armored vehicles, the Army returned to Jeep for a different vehicle — a light, unarmored tactical vehicle.

According to Fox, earlier in 2016, the Army commissioned Hendrick Dynamics to developed a modified light off-road vehicle. And the company to build it on a Jeep Wrangler with a modified JP-8 diesel engine. The Army called it “the Commando,” and it’s now officially designated as a Grand Mobility Vehicle.

And now, 75 years after the release of the very first General Purpose vehicle, Jeep has fielded dozens of models of sport utility vehicles across the defense and civilian space, and become a legend in the automobile industry.

According to a statement by Chrysler Jeep, “For 75 years the Jeep brand has been indelibly linked to freedom, adventure, authenticity and passion.”