The Military Is Working To Develop Underwater Drones

This fall, an unusual vessel will begin sea trials off the coast of California. The 51-foot-long Boeing Echo Voyager will... 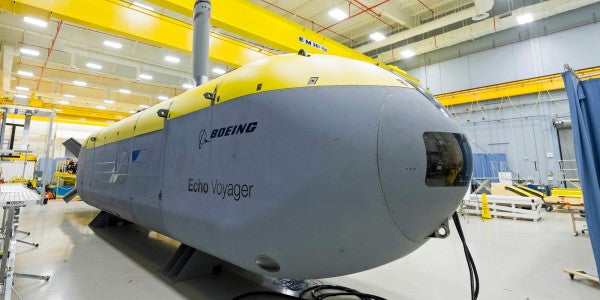 This fall, an unusual vessel will begin sea trials off the coast of California.

The 51-foot-long Boeing Echo Voyager will have no crew. It will glide underwater for tfdays or weeks, quietly collecting data from the ocean floor to send back to crews on ships or on land.

Ever since the start of the war in Afghanistan in 2001, the U.S. military has relied more and more on flying drones to take on dangerous air missions. But increasingly, drones are taking to the sea as well.

The U.S. Navy has proposed about $319 million for the development and purchase of underwater drones in the president’s budget for the coming fiscal year. It envisions them stealthily gathering intelligence on opponents, detecting and neutralizing mines, hunting submarines and charting the ocean floor.

It’s part of a much broader strategy to leverage artificial intelligence and stay one step ahead of rivals, as the Pentagon did with guided weapons in the 1990s.

“As tensions continue to grow with China and Russia, two militaries that have sophisticated and very large navies, there is a growing interest in making use of unmanned technology in the maritime sphere,” said Arthur Holland Michel, co-director of the Center for the Study of the Drone at Bard College in New York.

“They are scalable, they are dependable, they can operate with a fairly high degree of autonomy,” he said. “All these things would have been useful 30 years ago, but the technology wasn’t quite there.”

The potential for naval drones to operate free of human operators was shown this year when the Defense Advanced Research Projects Agency unveiled its Sea Hunter, a largely autonomous, unmanned anti-submarine vessel.

The prototype 132-foot-long Sea Hunter is designed to sail on its own for as long as three months, find a submarine using sonar and other sensors and trail it while sending location data to human operators. The vessel completed its first performance trials off San Diego in late July, its builder, Reston, Va., company Leidos said.

Underwater drones face different challenges than their aerial counterparts. For one, communication is more difficult, making it hard for an autonomous vehicle to report information it might pick up underwater.

That hurdle is being worked on by Liquid Robotics, a Sunnyvale, Calif., firm that makes the Wave Glider. The unmanned vehicle floats on the surface and uses wave and solar power to propel itself and its sensors for as long as a year.

The surfboard-shaped drone functions as a kind of gateway between underwater acoustic communications and air-based radio transmissions.

The vehicle’s sensor computer connects a surface radio modem and antenna with an underwater acoustic modem, allowing information to be transmitted quickly back and forth.

The same connection can be established with ships, though that can be expensive, or with buoys, which don’t allow for much movement.

Other underwater vehicles have towed long antennas, but that is a much slower method of transmitting data, said Graham Hine, senior vice president of global partner development at Liquid Robotics.

“We’re thinking it would be the router of the ocean,” he said. “Once you start to network things and then have ubiquitous communications and positioning, things start to get interesting.”

The Wave Glider can carry a range of acoustic sensors that listen for vessels on the sea or piece together a picture of the ocean floor.

Originally developed by company co-founders Roger Hine and Joseph Rizzi to listen to whale songs, the Wave Glider caught the interest of the Navy, which has worked with the company since 2008, Graham Hine said.

Two years ago, the company struck a partnership with Boeing Co. to develop a military version, the Sensor Hosting Autonomous Remote Craft, or SHARC, that combines the Wave Glider platform with Boeing’s sensor technology.

Boeing sees the platform as a potential communication conduit between underwater vehicles and aircraft, ships or satellites. It is working with the Navy’s research lab to develop additional capabilities for SHARC.

“Ultimately, it is a more efficient and effective way to do maritime surveillance, we think, in large ocean areas,” said Egan Greenstein, senior director of autonomous maritime systems at Boeing.

But to do a thorough job of surveillance and undersea data collection, drones need to stay submerged for weeks or even months without external help or power.

Boeing experienced this challenge firsthand when it used its Echo Ranger unmanned underwater vehicle for oil and gas surveying. The drone charged up and reported its status at a host ship, but when storms blew in all operations had to stop.

Eventually, Boeing stopped using the Ranger for that kind of commercial work.

“It was profitable while we were out doing the survey missions,” said Dan Tubbs, deputy director of Sea & Land at Boeing Phantom Works in Huntington Beach. “It was not profitable when it was in port all the time.”

In March, Boeing unveiled the 50-ton Echo Voyager, which is designed to carry out monthslong surveillance and reconnaissance missions for defense, commercial and scientific customers.

Powered by a hybrid electric-battery/marine diesel system, the drone periodically surfaces to snorkel depth to recharge its batteries by raising a mast and running the diesel engines. That’s when the drone also can connect to satellite operations to transmit data to operators. It can send limited communications while submerged, but only to a nearby ship.

To bolster its endurance, the Echo Voyager has backup systems. To give it a degree of autonomy, the navigation system incorporates motion and rotation sensors, as well as sonar to avoid obstacles.

Autonomous systems have the potential to cut personnel costs, but developing them has proved to be complex and costly.

In February, the Navy canceled further production of a remote mine-hunting system developed by Lockheed Martin Corp., cutting down the expected order from 54 to 10 that had already been delivered. The system was to be used in the Navy’s new littoral combat ships, but the autonomous vehicles that towed mine-hunting sensors were unreliable.

“The autonomy side of the equation, the research is happening at a very quick pace,” said Holland Michel of Bard College. “But as you see time and time again, it’s very challenging to make unmanned systems that can make intelligent and dependable decisions on their own.”

The biggest challenge to the industry’s growth could be its lack of versatility. There are simply more applications for unmanned aerial vehicles than underwater drones, especially in the commercial market, said Michael Blades, senior industry analyst for aerospace and defense at research and consulting firm Frost & Sullivan.

“I think the market will grow steadily, but it won’t be explosive like the unmanned aerial vehicle market,” he said.

Eventually, though, the two drone worlds will merge.

In May, AeroVironment Inc. of Monrovia announced it had a contract to sell to the Navy its small, Blackwing unmanned aircraft, a single-use drone that shoots out of a tube from submarines or autonomous undersea vehicles. It sends back data, then drops into the water once it’s done.

A company spokesman said he could not comment on the size of the contract.