The Army has awarded contracts to multiple defense contractors to whip up a family of drones that can conduct surveillance and reconnaissance, pose as decoys, wage electronic warfare, and deliver lethal payloads alongside the service's next-generation helicopter 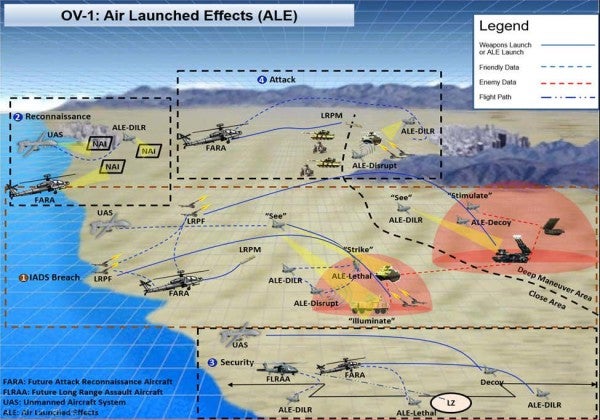 The Army has awarded contracts to multiple defense contractors to whip up a family of drones that can conduct surveillance and reconnaissance, pose as decoys, wage electronic warfare, and deliver lethal payloads alongside the service's next-generation helicopter, officials announced on Monday.

The service has awarded ten contracts totaling $29.75 for it's Air Launched Effects (ALE) effort, a group of unmanned, air-launched systems that are designed to penetrate anti-access and area denial (A2AD) environments and defeat enemy air defenses through a variety of interchangeable payloads.

The ten contracts cover three different areas of the ALE effort: the air vehicle, the mission systems, and the unique payloads themselves.

Related: The Army wants a drone swarm to back up its next-generation helicopters against enemy air defenses

According to an Army Combat Capabilities Development Center RFI published earlier this month, the ALE effort comprises both small (less than 60 pounds) and large (between 150 and 250 pounds) drones that will team with other aerial platforms to “detect, identify, locate, report (DILR) and deliver lethal and non-lethal effects against threats across multiple scenarios and domains.”

The ALEs primary functions are passive DILR, or detection and reconnaissance across the electro-optical, infrared, and radio frequency spectrums; active DILR for more aggressive reconnaissance against hardened targets; decoy, or confusing adversary integrated air defense systems through electronic warfare or other cyber effects; and disrupt, or “reducing threat engagement ranges or preventing the acquire/track/guidance of munitions” against Army assets.

The ALEs “may be both recoverable and non-recoverable with one or more payloads per ALE to maximize the combination of effects needed for mission success,” according to a request for information for the effort published in 2019.

As Task & Purpose previously noted, ALE effort comes amid the U.S. military's pivot towards more traditional adversaries like Russia and China after decades of counterterrorism efforts abroad, a shift that has left the Army looking for aircraft “capable of operating in a complex airspace and degraded environments against peer and near-peer adversaries with an advanced integrated air defense system,” according to the service.

The awards “will continue to support the future Multi-Domain Operations battlefield”  alongside the Future Attack Reconnaissance Aircraft (FARA) that, part of the ongoing Future Vertical Lift (FVL) program, is intended to replace both the Army's recently-retired OH-58D Kiowa Warrior scout copters and half of the service's AH-64 Apache fleet in the coming years

Despite the focus on integrating with the FARA, the ALE effort isn't confined to just that airframe. The recent CCDC RFI's operational concept also envisions how a fleet of unmanned ALE systems might fit in with the Future Long Range Assault Aircraft (FLRAA) that, also in development under the service's FVL effort, will eventually replace the Army's UH-60 Black Hawk fleet.

And ALE may not be just for aircraft, either: according to the 2019 RFI, the Army wants systems that aren't just launched from unmanned aircraft systems and manned helicopter fleets, but “alternatively deployed in support of long range precision fires and ground combat vehicles via a variety of surface based launch systems such as common launch tube, artillery, mortars or shoulder fired systems.”

The ALE family of systems “extends tactical and operational reach and lethality of manned assets, allowing them to remain outside of the range of enemy sensors and weapon systems while delivering kinetic and non-kinetic, lethal and non-lethal mission effects against multiple threats, as well as, providing battle damage assessment data,” according to the Army.