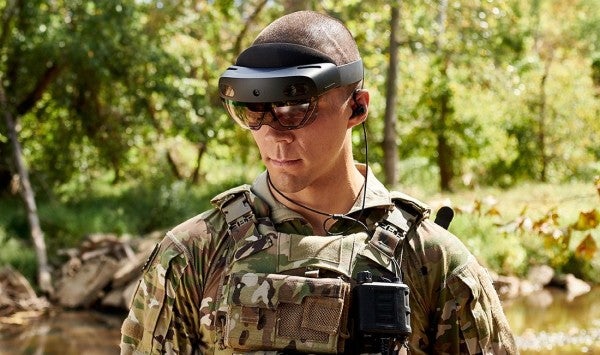 The Army originally imagined that its futuristic new heads-up display would help soldiers see in the dark, translate foreign languages, and navigate unfamiliar battlespaces during the wars of the future. Now however, the system is going to work early against an unusual new enemy: the novel coronavirus (COVID-19).

Soldiers at Fort Benning are currently using the Integrated Visual Augmentation System (IVAS) based on Microsoft's HoloLens technology to “rapidly assess” the temperature of hundreds of soldiers daily in the base's training pipelines, including basic training and Ranger School, the Army announced on Monday.

With new recruits resuming basic training at various bases across the country following a two-week pause to give commanders time to reassess screening procedures, the IVAS' digital thermal sensors have essentially been repurposed to detect fevers as an on-the fly diagnostic tool.

The screening effort at Fort Benning used prototypes from a second user evaluation that do not represent the final version of the IVAS, according to the Army's press release, prototypes which “cannot [yet] be used outdoors, where temperatures continually fluctuate, for the purpose of fever detection.”

Luckily, officials say the sudden deployment of the IVAS to the frontlines of the COVID-19 fight has done little to delay the ongoing development and maturation of the system for combat as a top priority for Army modernization officials.

“That's the genius of this system; we can use this technology today to fight the virus, even as we shape it into the combat system our soldiers need tomorrow,” Brig Gen Tony Potts, the PEO Soldier at Fort Belvoir, Va., said in a statement. “While we're maintaining momentum in pursuit of modernization, we have to keep in mind that readiness today is critical.”

The Army plans on fielding over 40,000 IVAS goggles by late fiscal year 2021, according to the service’s February budget request.

According to the latest data from the Defense Department, the Army had 998 positive cases of COVID-19 in the ranks as of Tuesday.