"I got a fever, really weak and I had aches. I coughed a lot and when I blew my nose I had red spots" 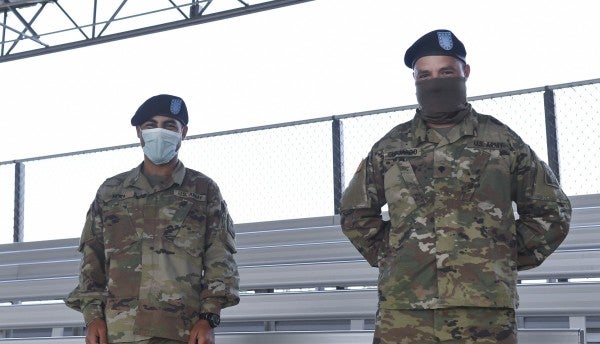 After being temporarily sidelined by the novel coronavirus (COVID-19), two trainees at Fort Jackson have recovered for the disease, graduated basic training, and are heading on to the next phase of their Army careers.

According to an Army press release, Pvt. Carlos Mora, 21, said he woke up one morning and “felt horrible,” with a fever, and some pain. He told the drill sergeants and went to the hospital, and then spent a week in quarantine after testing positive for COVID-19.

Mora, from Puerto Rico, was soon joined by a handful of others from the 2nd Battalion, 39th Infantry Regiment, who also went into quarantine. He said he mostly was just out of breath and had a cough, but that others around his age “had it worse.”

Spc. Juan Guajardo, 36, another one of the soldiers in the battalion who got sick, though he said he has “no idea” how he got it.

“I got a fever, really weak and I had aches. I coughed a lot and when I blew my nose I had red spots,” Guajardo, an Army reservist, said in the release. “I went to the hospital and they did the test. I was positive.”

Because of the time they had to spend away from training, Mora and Guajardo were later reassigned to the 4th Battalion. For them, basic training went from 10 weeks to 13 weeks.

Both soldiers graduated on May 14, and are heading to Advanced Individual Training (AIT). Mora is planning to become a wheeled vehicle mechanic, while Guajardo will become an information technology specialist.

In April, senior Army leaders said that around 50 cases of coronavirus had emerged in a training battalion at Fort Jackson. The service put a two-week pause on sending new recruits to basic training, hoping to give officials more time to put additional measures in place to ensure that new recruits weren't at risk of catching, or spreading, the virus upon their arrival.

Both Mora and Guajardo said they've been encouraging family and friends to take the virus seriously since their experience.

According to the release, various health and safety measures were “swiftly” implemented at Fort Jackson, including more cleaning of living spaces, using cloth face coverings, and restricting family members and friends.

Lt. Col. Patrick Collins, commander of the 4th Battalion, 39th Infantry Regiment, said that no individuals have tested positive for the virus since.

“Our cadre have done a phenomenal job,” Collins said in the release. “All the credit goes to them.”