The Army is training dogs to detect COVID-19 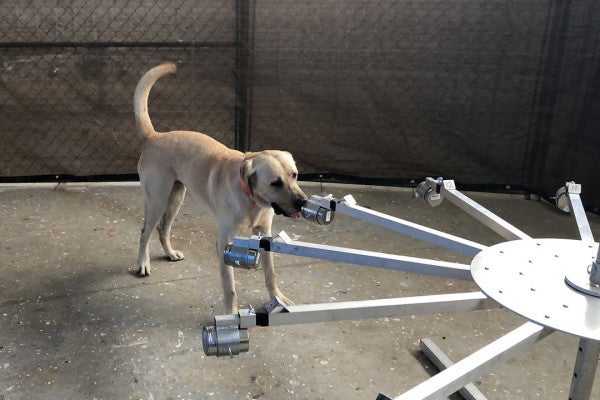 The Army is exploring whether dogs can detect signs of the novel coronavirus (COVID-19) thanks to a new research agreement with the University of Pennsylvania.

Researchers from the Combat Capabilities Development Command (CCDC) Chemical Biological Center have entered into a cooperative research and development agreement with the University of Pennsylvania School of Veterinary Medicine (Penn Vet) Working Dog Center, which has trained dogs to detect cancer and diabetes in the past, according to an announcement from the service.

The project, first conceived in March and formally established in mid-May, is working to train dogs to detect biomarkers of COVID-19, the proteins that the human immune system produced in response to the presence of the virus.

The goal “is to train dogs to detect the disease state before a person starts showing signs of disease such as fever, coughing, and shortness of breath,” researcher Michele Maughan said in an Army statement.

To do this, Penn Vet researchers use what's called a Training Aid Delivery Device (TADD), a laboratory device first developed by the Chemical Biological Center back in 2013 for handling hazardous substances that, thanks to a special membrane, allows dogs to train with substances like drugs and explosives without direct contact.

“We knew the TADD would be perfect for containing COVID-19 patient samples of saliva or urine because we knew this odor profile would be quite nuanced and require the dogs to key in on some really low [volatile organic compound] molecules,” Maughan said. “It’s important that the containment system, the TADD, doesn’t compete with the target odor.”

According to the Army, the Chemical Biological Center and Penn Vet started training as recently as May 26 with the help of Patrick Nolan, the owner of a Maryland-based working dog business who spent more than a decade training military working dogs for Army Special Forces personnel.

“Pat provided ten working dogs and, using human saliva and urine samples provided by the University of Pennsylvania, got the dogs working with the TADDs right away,” Maughan said. “Training dogs to do this kind of work, detecting a substance down to the parts per trillion level is an art, and I could think of no one better than him to do it.”

Using TADDS and a specialized training wheel, Nolan works to train dogs not just to detect a certain scent, but “to stay engaged in the hunt for it for hours at a time,” as the Army put it.

Here's how the training system works, per the Army:

The training wheel is central to that training process. It has multiple arms, each one has a TADD attached at the end of it. Some contain saliva or urine from a symptomatic COVID-19 patient, some contain an asymptomatic person’s sample, and some are from a person who does not have the virus. But the choices do not end there. Some contain an inert substance as a control, some have a distraction element inside such as an open magic marker or food item or a tennis ball, and some are empty.

The dog is, in effect, paid to become increasingly selective, honing its attention down to just the COVID-19 immune response odor. For these Labrador retrievers, payment is a food treat or a favorite toy. As the training progresses, Nolan stacks the wheels making for even more sources of stimulation for the dogs and demanding that they become more and more selective.

Each dog takes six to nine weeks to train, according to the Army, and the Chemical Biological Center and Penn Vet are working on establishing a proof of concept for a dog-based detection system. But should the team manage to effectively train and operationalize working dogs, they could plausibly supplement existing detection methods in crowded public places like airports or sports stadiums — not just now, but in the future.

“This is even bigger than the pandemic we are dealing with now,” Biochemistry branch chief Patricia Buckley said in a statement. “We will face future pandemics from other viruses and having a capability like this will keep the nation ready for whatever happens next.

Related: The Air Force is struggling to find homes for retired military working dogs. Here's how you can help