"The ones you love never truly die." 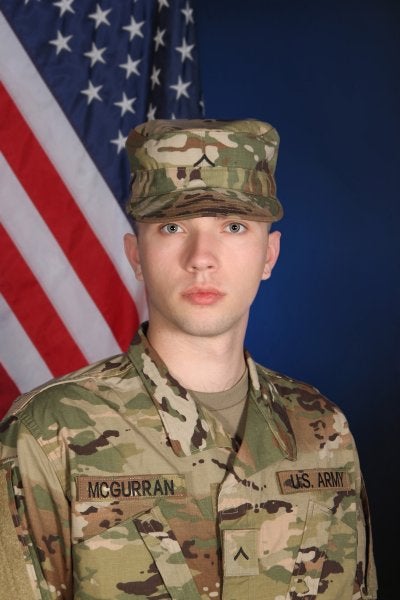 Pfc. Connor James McGurran was found unresponsive on the morning of Jan. 8. According to a Fort Jackson press release, McGurran had completed eight weeks of basic training, and was in the middle of his final training exercise, The Forge, which “tests each trainee on the skills and knowledge they have attained throughout BCT.”

He was transported from the field to a nearby hospital, where he was pronounced dead.

“He was a good teammate and battle buddy,” Lt. Col. Michael Penny, battalion commander of 3rd Battalion, 39th Infantry Regiment said in the press release. “The day he passed … his closest friends in the company asked if they could continue to carry Pfc. McGurran's rifle till the end to honor their friend.”

McGurran's battle buddy, Pvt. Trentarius May, spoke during the ceremony, which was attended by McGurran's fellow soldiers, Fort Jackson leadership, and family. May directly addressing McGurran's father — Navy Cmdr, Shawn McGurran, who was sitting in the front row in his dress Navy uniform which “stood out distinctly among the sea of Army combat uniforms,” per the release.

“McGurran was an amazing person, perfect with all of his flaws. He was honest and seemed like everything he did came from the heart,” May told Cmdr. McGurran. “He made you feel like you meant something.

“Sir, I want to let you know that you are not going through this alone. The ones you love never truly die.”

The memorial ceremony came to a close with the traditional “Last Roll Call,” a playing of Taps, and a 21-gun salute.

“Your soldier wasn't just a soldier,” May told McGurran's father. “He was our brother.”