This 59-year-old veteran left the Army a decade ago. Now he’s headed back to basic training

"To have the opportunity to serve again is a thrill" 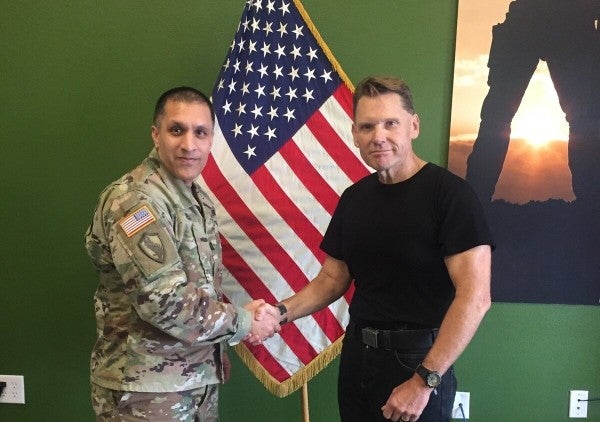 If you're heading to basic training at Fort Jackson in June, you may run into a slightly older soldier.

According to a report from Army Times' Kyle Rempfer, 59-year-old Staff Sgt. Monte L. Gould left the service in 2009 — three years before he was eligible for retirement.

After spending more time with his family, Gould started a lengthy process to reenlist in the Army Reserves, “so that he can be eligible for retirement and maybe give something back” to the younger generation of soldiers.

His time out of the service requires him to go back to basic training, which shouldn't be an issue considering he “still practices jiu jitsu and rucks with 50-pounds for seven miles each week,” Army Times reports.

“If I'm lucky, I got 20 more years and then I drop dead,” Gould told Army Times. “To me, this is a last hurrah. To have the opportunity to serve again is a thrill. I'm looking down the gun barrel at 60, and I know all the health problems that come after that.”

Gould has had a busy career to get where he is today. He joined the Marines in 1978, later leaving to work in California law enforcement. Around the time Operation Desert Storm began, he joined the Army National Guard as an infantryman; he even attempted to attend the Special Forces Assessment and Selection, but was told he was “too old.”

So, he joined civil affairs though an Army Reserve unit in California and was deployed to Afghanistan in 2004. He later joined the 7th Psychological Operations Group, leaving the service only when he realized another deployment “could prove problematic for his personal life.”

Gould started thinking about joining again when his son went into the Army Reserves. His wife approved, so Gould began the process of reenlisting, even losing 45 pounds to meet height and weight standards.

Then he was rejected because of his age.

But Gould didn't take no for an answer — instead, he got in touch with his congressman and a friend at the Pentagon, and eventually got his paperwork to the top of Army personnel.

“I had high hopes,” his recruiter, Sgt. 1st Class Richard Caroll, told Army Times. “I like a challenge, and this was pretty challenging.

Now, Gould is on track for basic training at Fort Jackson, South Carolina, this summer. He said he was told he'll be able to keep his rank of staff sergeant, and continue wearing his combat patches.

Following BCT, Gould will be joining a detachment with the 405th Civil Affairs Battalion — the same as his son, Spc. Jarrod Gould. And he plans to stick it out for as long as he can, he told Army Times, even if it brings another deployment his way.