Blasting drones out of the sky just got a whole lot easier. 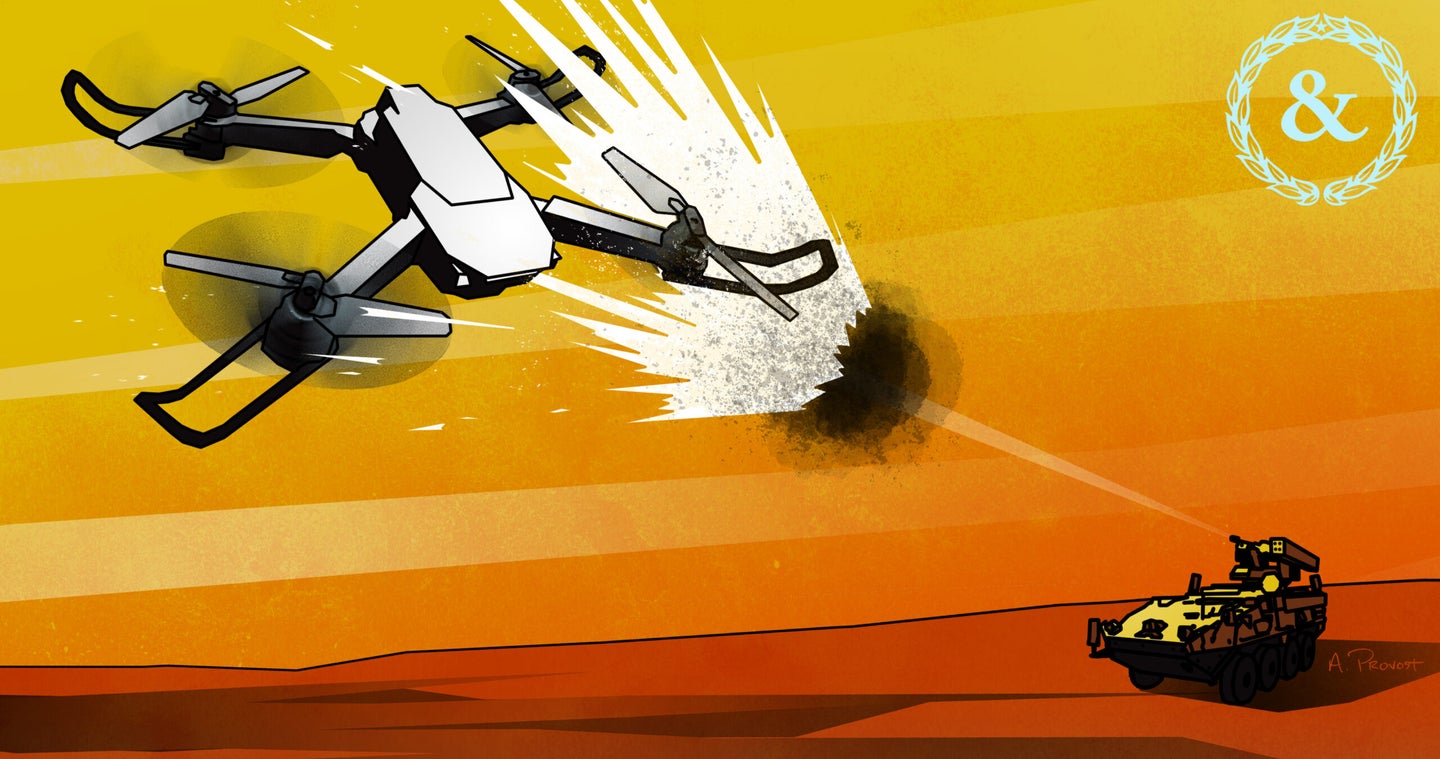 The Army has started fielding a new ‘proximity’ airburst round to its Stryker force for use against incoming airborne drone threats, a defense official confirmed to Task & Purpose.

Developed by defense contractor Northrop Grumman and dubbed the XM1211 High Explosive Proximity (HEP) cartridge, each 30×113 mm round comes outfitted with a tiny radio-frequency sensor that detects unmanned aerial systems (UAS) and explodes, giving soldiers a better chance at destroying an airborne target than relying on a direct hit.

The XM1211 round is “tailored toward a kinetic kill capability to conquer the UAS threat,” Northrop’s director for ammo business development Mike Hafften recently told National Defense magazine, adding that the technology in the proximity sensor used in the round “has been around for decades.”

While adding a sensor inevitably increases the cost of each round, Hafften argued that using small arms ammo to take out drones that might cost an adversary as little as a few hundred dollars is far more cost-effective than using, say, the FIM-92 Stinger missiles that have recently become a fixture of U.S. military short-range air defense systems.

The XM914, which can be operated on vehicle-mounted weapon stations across several different platforms, was adopted to “provide enhanced lethality, mobility, and capability beyond .50 caliber to conduct direct fire overmatch against like threat systems,” according to the Army’s PEO Soldier.

According to Hafften, the XM1211 round is well-suited to eliminating what he called “Class I and II” drones, which can weigh anywhere from “20 to 250 pounds” (although it’s worth noting that under the DoD definition of drones, ‘Group 1 and 2’ together only weigh up to 55 pounds).

The XM1211 HEP has been in development for the Army since at least fiscal year 2019, according to information from the Army’s Acquisition Support Center. The service accepted first deliveries of the round in June and started fielding them to troops in September, a JPEO Armaments & Ammunition spokesperson told Task & Purpose.

The round has undergone several demonstrations for the U.S. military since 2020, most recently during the 2021 Bushmaster User Conference where Northrop Grumman slapped an M230LF chain gun onto the Pratt & Miller EMAV-LW30 Unmanned Ground Vehicle.

While DoD budget documents do not reveal any recent requests for or purchases of XM1211 HEP rounds among recent Army budget requests, a September 2021 sources sought notice stated that “current anticipated requirements” for the round’s use in Army and Marine Corps chain guns looked like “between 20,000 and 40,000 cartridges per year” between fiscal years 2024 and 2029.

Regardless of the volume, the proliferation of the new proximity rounds among U.S. forces may offer yet another useful tool for soldiers alongside missiles, lasers, and smart optics to combat the surge in cheap, weaponizable drones across battlefields from Syria to Ukraine, a development that the former head of U.S. Central Command once called the greatest threat to U.S. troops downrange since the improvised explosive device.

“These systems are inexpensive, easy to modify and weaponize, and easy to proliferate,” then-CENTCOM chief Marine Gen. Kenneth McKenzie Jr. said in 2021. “They provide adversaries the operational ability to surveil and target U.S. and partner facilities while affording plausible deniability and a disproportionate return on the investment, all in our adversaries’ favor.”

While the development of the M-SHORAD and MADIS systems that the XM1211 HEP round will equip was strongly informed by the U.S. military’s pivot from counterterror operations to ‘great power competition’ against more advanced better-equipped and more-advanced ‘near peer’ adversaries, both air defense systems were also designed to counter “small air threats” like those classes of UAS assets that Hafften previously mentioned.

How well the XM1211 will end up serving troops downrange is another question. While video of previous demonstrations shows the round taking out a handful of drones at a time, the threat of drone swarms like the 40-quadcoptor force recently trotted out against soldiers at the National Training Center at Fort Irwin, California may end up testing the limits of the round’s lethality.

“That’s where this obviously needs to go,” he said.