“You can’t sit back and rely on the military to give you a solid flow of new trained pilots.” 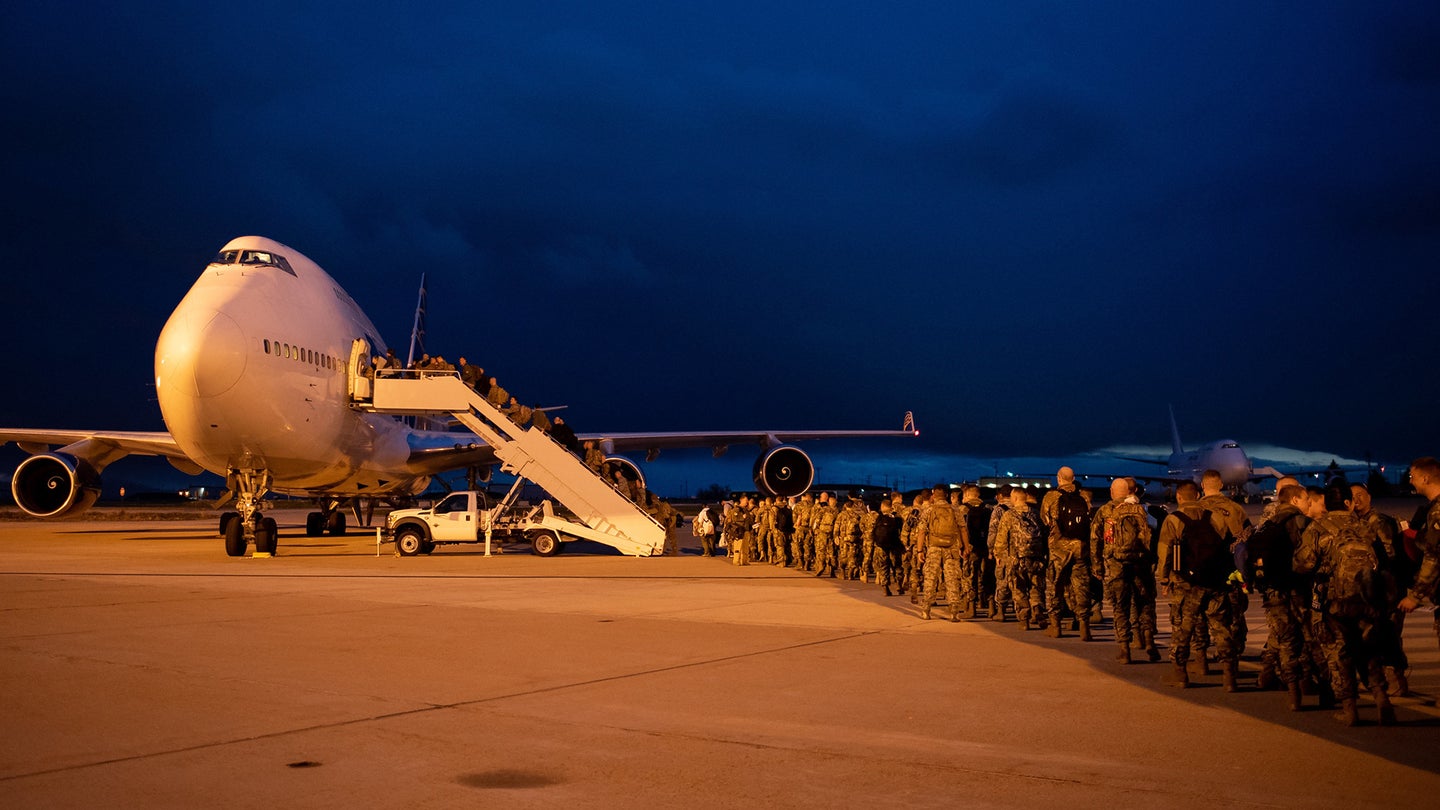 Airmen from the 388th and 419th Fighter Wings file onto a 747 at Hill Air Force Base, Utah, bound for the Middle East to support the F-35A Lightning II’s first deployment there. (U.S. Air Force photo by R. Nial Bradshaw).
SHARE

The commercial airline industry has lured experienced pilots away from the U.S. military for decades with the promise of better pay, never having to “fly a desk,” and the fact that going to work probably won’t involve being in an active war zone.

Now, the CEO of a major airline is saying that a pilot shortage might be on the horizon — if it’s not already on its way — and it’s due to the military not producing enough pilots that they can then siphon away to the private sector. While answering a question about the United Aviate Academy, United Airlines’ training program for future pilots, Scott Kirby, the CEO for United suggested that the military was to blame for the limited pool of pilots available to airlines.

“Down the road there probably is going to be a pilot shortage here in the United States,” Kirby said during the brief exchange in a recent Axios on HBO interview.

“The military produces far fewer pilots today than they did in the Vietnam and the Cold War era and it’s hard to become a pilot — a commercial airline pilot on your own — if you’re not going through the military.”

The conversation quickly shifted back to United’s goal to recruit, train, and retain a more diverse cadre of commercial aviators, but Kirby’s remark — that major airlines rely on the military to produce pilots — was telling, and it might signal problems to come, for both the airlines and the U.S. military.

As more Americans prepare to travel once more, commercial airlines, hit hard by the novel coronavirus (COVID-19) pandemic, are struggling to keep up. In 2020, for obvious reasons, air travel in the U.S. saw its sharpest decline ever, and airline losses likely exceeded $35 billion due to the pandemic, CNBC reported earlier this year. With Americans just now starting to travel like they did pre-pandemic, the airline industry isn’t out of the woods yet.

On Monday American Airlines was forced to cancel hundreds of flights over labor shortages. The issue stems, in part, from a shortage of staff, which was worsened by the pandemic when companies were forced to furlough employees, leaving vacancies they are now struggling to fill.

But not all of these problems are new, and one has been slowly brewing for some time: There may not be enough pilots.

“He’s right, in the fact that the military does produce fewer pilots than it did in the past and has traditionally been a feeder into the major airlines,” said Tobias Switzer, a fellow with the Center for Strategic and International Studies and an Air Force colonel and special operations helicopter pilot. “Those numbers have dwindled over time and we don’t produce nearly as many.”

“However one of the reasons the airlines rely heavily on the military is that it is challenging for somebody who wants to fly, who wants to be a commercial airline pilot, but doesn’t necessarily want to go through the military,” said Switzer, who has written extensively about this issue over the years, most recently for Defense One.

The situation is somewhat ironic. While the CEO of an airline is blaming the military for not producing enough pilots to steal away, the Department of Defense often blames pilot retention issues on the airlines stealing away their pilots. In other words…

The military has struggled heavily with retaining its aviators in recent years, thus limiting the number of pilots airlines can draw away, but on a much more immediate level, this tug-of-war over personnel leaves the services short on pilots to perform their critical roles in support of U.S. military operations.

According to an October 2020 report by Switzer, back in 2016 the Air Force was short 1,500 pilots, but that problem has only worsened since then. Currently, the service has roughly 19,100 pilots, which is still 1,900 short of its goal of 21,000, Air Force Times reported on Tuesday. And while the pandemic caused airlines to put a hold on recruitment, thus giving the military a reprieve from airline recruiters with luxurious offers, it won’t last.

Eventually, the same sweet deals that lured past military pilots away from their respective services will return to the table, like the assurance that their job will solely be to fly aircraft and not take on additional administrative billets, or pick up and move every few years, not to mention the prospect of making substantially more money. (The median annual salary for airline pilots, copilots, and flight engineers came in at roughly $160,900 in May 2020, with the top 10% of earners making more than $208,000 according to the U.S. Bureau of Labor Statistics.)

With a return to relative normalcy, as far as air travel is concerned, competition over the same limited pool of pilots is likely to continue in earnest.

Becoming a civilian commercial pilot without being in the military first is no picnic, either, which is part of the airlines’ problems. As NBC news reported in January, airlines were already grappling with a shortage of pilots going into the pandemic, as many who were hired during the 1980s — a boom period for aviation hires — headed into retirement. To make matters harder for airlines, it takes as many as 1,500 flight hours for someone to accrue all the necessary Federal Aviation Administration certifications to be an airline pilot.

However, there is one well to which airlines can return again and again to scoop up trained pilots who already meet many, if not all, of the FAA’s certification requirements: The military.

“Ultimately it comes down to who’s going to pay for the investment of training,” said Switzer. “There are very few ways to do that and they are all extremely long and expensive, so if you were thinking about that path to go fly for the Navy, Marine Corps, Air Force, Army, or whatever; they’ll pay your salary, pay for your training, give you all the powers and experience you need.”

The airlines know this, as was blatantly apparent by Kirby’s answer during the Axios interview.

“A barrier undoubtedly exists for aspiring pilots who want to join an airline, and that barrier is primarily a financial one,” said Charles Hobart, a spokesman for United Airlines.

“To counter this, we’ve made significant investments in our pilot training program that will create additional pathways to the cockpit,” said Hobart, adding that United has begun working toward recruiting 5,000 new pilots by 2030 to train at their flight school, the only one run by a major airline in the U.S.

But the argument that the military is responsible for a shortage of private sector pilots is a tough sell for some.

“Right now, the supply of pilots is low and demand is rising, which means United will simply have to pay more, as will the others. That’s how capitalism works,” said Richard Aboulafia, an aviation expert and the vice president of analysis for the Teal Group, a defense, engineering, and aerospace consultancy company.

“You can’t sit back and rely on the military to give you a solid flow of new trained pilots,” Aboulafia told Task & Purpose. “That’s as passive as it gets. A good businessperson has to think one step ahead.”

That said, it’s no wonder why airlines would prefer to yank pilots out of their issued flight suits and toss them into an airline uniform. After five to eight years in the military most pilots will be able to get 1,500 flight hours, Switzer said, but once they are eligible for commercial airline work, they’re also of even greater value to the military and in short supply.

Unlike an airline, which can recruit from competitors and swap one pilot for the next, the military can’t just grab someone from the private sector who’s been flying passenger planes and drop them into the cockpit of a fighter jet.