I have news for everyone: The Tetris Challenge is a fucking gear inspection. 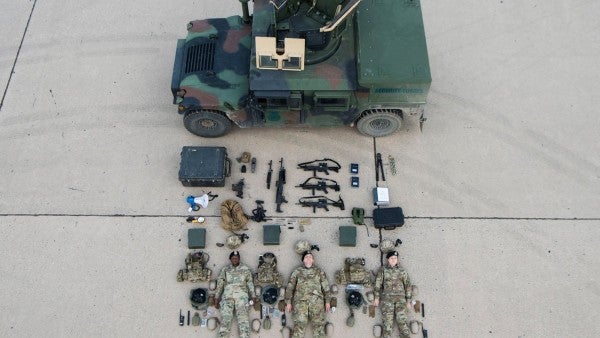 In recent weeks a small corner of Twitter has been besieged by photos of first responders and service members posing alongside gear, assorted equipment, and vehicles that have all been meticulously organized to look like a life-sized toy set, before being posted online as part of the so-called Tetris Challenge.

The Guardian wrote about the viral meme trend on Sept. 18, in which emergency responders took part in the challenge, and on Sept. 28, The Warzone's Tyler Rogoway reported its recent spread to mil-Twitter – and noted that the trend might date as far back as November 2018.

However, the act of methodically arranging your shit in neat and ordered rows has been around a lot longer than that.

We Military personnel wrote the book on the Tetris Challenge.#TetrisChallenge pic.twitter.com/x3Ifw3KBOH

Think about it: The whole trend is based on people painstakingly arranging equipment outdoors, under the full sun, for the viewing pleasure of others. I have news for everyone: The Tetris Challenge is a fucking gear inspection.

The only difference is that the folks involved in this seem genuinely happy to be doing it.

Just compare that, to this image of an actual “junk on the bunk” inspection:

Not so fun without the hashtag, is it?

The fact that this isn't new shouldn't be surprising: Militaries around the world have been staging arms, munitions, and vehicles in neat little rows for years.

A Boeing B-52H static display with weapons, at Barksdale Air Force Base in 2006

None of this is to say that these photos aren't great: They are!

I just can't help but imagine what it'll be like for a SNCO charged with corralling a platoon in a post-TetrisChallenge world:

Staff Sgt: “Alright, we have a gear inspec- Wait, where are you going?”

Troops: “We're going to go draw weapons, then lay all of our equipment at the motor pool, covered and aligned with the MRAPS, staff sergeant.”

Staff Sgt: “I've been trying to get you asshats to do a gear inspection without bitching for ages! What gives?”