On Dec. 7, the Gary Sinise foundation partnered with American Airlines to fly more than 1,700 Gold Star family members across the country to Orlando, Florida, for a five-day Christmas vacation to Disney World. 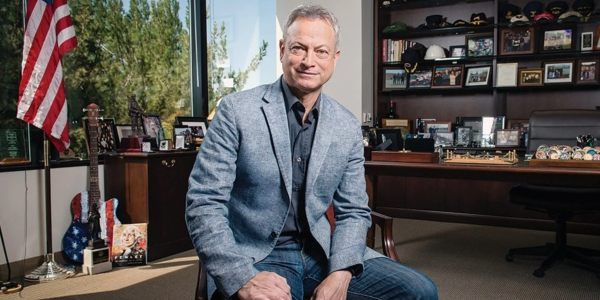 Gary Sinise may be best known for his role as Lt. Dan in Forrest Gump, but in the 25 years since the Oscar-winning film's debut, he's leveraged his stardom to give back to the military and veterans community through the Gary Sinise Foundation.

On Dec. 7, Sinise's foundation partnered with American Airlines to fly more than 1,700 Gold Star family members from across the country to Orlando, Florida, for a five-day Christmas vacation to Disney World.

“The holidays can be especially challenging for grieving families,” reads a statement from the Gary Sinise Foundation provided to Fox News. “Each December, we host a five-day experience for 1,750+ children of the fallen and their surviving parent or guardian. As a therapeutic retreat with a blend of fun and inspiring programs, these families can lean on their peers for support.”

This charter left Los Angeles this morning with 91 kids, 176 in all, and I got to take these photos with them before they left. I’ll join up in a few days. Have fun kids! We love you! pic.twitter.com/jPRuZ0iuIp

The actor, director, and musician's philanthropic work is nothing new. Since 2011, his foundation has built custom-made smart homes for severely wounded vets; hosted morale shows, many featuring the Lt. Dan Band, among others; run local events and cookouts for veterans and families of the fallen; and organized trips for veterans and students to visit the military museums and memorial sites across the country.

When Task & Purpose spoke to Sinise in 2018, he shared his thoughts on the differences between paying lip service — like the often-overused “thank you for your service” soundbite — and giving back through meaningful action:

“I think generally, there's a feeling within the general population, that 'well, at least saying I support veterans and military folks is a good thing. Even if I'm not actively doing anything to show that, at least I can say I support them.'

Now, there are other people who have decided to really manifest that into action — real serious action. There's people who say 'I'm not going to just say I'm supportive, I'm actually going to do something to express my support,' whether it's by donating money to worthy charities, or starting their own worthy charity, or promoting programs, or getting involved in various ways. There are a lot of people out there who are doing that.”

And based on his recent (and past) efforts, Sinise clearly falls into the latter category.