According To Actor Gary Sinise, ‘We Can Never Do Enough For Our Veterans’

Marine Staff Sgt. Jason Ross has had 240 surgeries since a 2011 improvised explosive device left him injured in Afghanistan.... 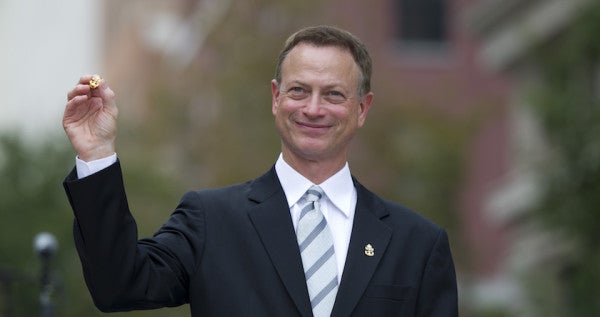 Marine Staff Sgt. Jason Ross has had 240 surgeries since a 2011 improvised explosive device left him injured in Afghanistan. The attack cost Ross both his legs, and he was given a 2% chance of survival, but he persevered.

In August, Gary Sinise, the actor best known for his role as “Lt. Dan” in the movie “Forrest Gump,” stepped in to give Ross a home that would fit his needs.

Through his foundation, The Gary Sinise Foundation, which serves veterans, first responders, their families, and those in need, Sinise helped build a house that would make everyday life easier for Ross and his family.

According to its mission, the Gary Sinise Foundation “is building custom Smart Homes for severely wounded veterans, serving hearty meals to deploying troops and hosting spirit-boosting festivals for patients, families and medical staff at military hospitals.”

Sinise, the Marine Corps Scholarship Foundation, and the Semper Fi Foundation also partnered together and started a college fund to ensure that Ross’s two daughters are taken care of as they get older.

“I’m trying to do what I can to entertain and support our military,” Sinise told CNS News. “It’s an important thing. We can never do enough for our veterans.”

Watch the report from CNS News below.