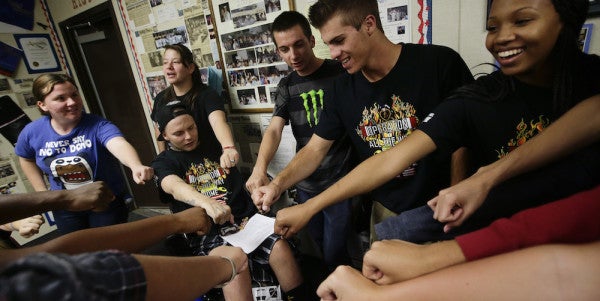 The morning of May 29, 2007, began like any other in Baghdad’s slums of Sadr City: hot, dusty, and accompanied by odors of open sewage and garbage rotten in the streets.

Four years after the invasion of Iraq, Baghdad remained a city stuck in a relentless fight between insurgents, militias, and the American troops, many of whom arrived in a surge to quell the violence.

All of these complications of war and efforts at peace became of little concern to one young man in the fight when an improvised explosive device pierced the thin underbelly of his M1A Abrams tank rolling on a mission in support of a special operations team searching for high-value insurgents.

Spc. Jerral Hancock, 1st Cavalry Division, was the driver. When the IED detonated, Hancock was immediately showered with white hot steel. The armored vehicle’s interior transformed to shrapnel that ripped and burned Hancock.

It was the present Hancock got for his 21st birthday. He was trapped, his body shredded and burning inside the vehicle.

The United States lost few tanks during eight years from 2003–2011, but the IED munitions supplied to Iran-backed Shiite militias found the 70-ton behemoth’s weak point: the thinly armored underbelly between the treads. Hancock’s crew mates jumped or were thrown free, but Hancock roasted in the burning hulk for 90 minutes before he was cut free, with some rescuers already believing him dead.

Shrapnel severed his spinal cord to paralyze him below the chest. Burning metal and wiring charred his torso into a scarred, fleshy canvas creating ornate “tanker” tattoos he still bears today. His left arm was sheared off above the shoulder. He calls it his “chicken wing.”

Hancock’s 21st birthday became his “Alive Day,” the day the enemy almost, but not quite, succeeded in killing him.

On Friday — the eighth anniversary of his Alive Day and 29th birthday — Hancock was accompanied by his family, children, and fiancée at a unique waypoint on the journey that began with the warrior’s catastrophic wounding in Iraq.

A few hundred of Hancock’s closest friends, led by a brother and sisterhood of high school students and representatives of the Gary Sinise Foundation, gathered to welcome him to his new “smart home” in Palmdale, California, eight years to the day he was blown up.

For the past two years, history students from Lancaster High School raised more than $300,000 to build this tribute home to one of their community’s most severely wounded veterans of the Iraq War. The Gary Sinise Foundation and allies kicked in the rest of the close to half-million dollars to finish the grassroots housing drive that resulted from a classroom visit by Hancock.

“I just went to talk to the class to tell them about my experiences,” Hancock told the audience gathered at Friday’s event. “I wasn’t expecting anything from it.”

Supervised by history instructor Jamie Goodreau and led by student Nicole Skinner, the group that was inspired by Hancock’s account of ordeal and triumph organized their own organic nonprofit, Operation All The Way Home.

A remark Hancock made during a “living history” presentation to the students organized by Goodreau awed the students. A few of his words became the signature phrase of their determination to build a home for the vet who rolled his electric wheelchair into their class to talk to them.

“Life does have to go on,” Hancock said at the class event in 2013. “Whether I choose to sit and pout or go with the flow is up to me.”

That phrasing of stoicism in the face of calamity soon turned up on t-shirts that the students sold to raise funds for their shared dream: a “smart home” for Hancock and his family, who were crowded into a couple of mobile home units on the gritty streetscape of Lancaster’s eastside.

Last year, in the final push of extraordinary community fundraising, the students were joined by Sinise, the Oscar-nominated co-star of “Forrest Gump” whose “Lt. Dan” character became the inspiration for the Sinise traveling troupe, The Lt. Dan Band. Sinise’s band has entertained troops and countless veterans worldwide at USO shows, stadiums, and military bases.

“We can always do a little more for our veterans,” Sinise reminds the crowds who visit his rolling thunder show of pop hit covers.

To raise money, the students, ramrodded by graduating senior Skinner, learned how to “not take no for an answer.” They sold shirts, ran pizza fundraisers, conducted yard sales, and relentlessly recruited sponsors, ultimately attracting the attention of the Gary Sinise Foundation, and Sinise himself who brought the Lt. Dan Band to the Lancaster baseball stadium last year where Hancock was honored along with thousands of local veterans.

Sinise was entertaining troops in South Korea on Friday, but sent his emissaries — former Navy SEAL Billy Wagasy and contact man and impresario Chris Kuban — to mark the festivities welcoming Hancock and his family into their new two-home mini estate.

“The kids were awesome,” Hancock said in an interview, adding quickly that they were “not kids. If you raise hundreds of thousands of dollars, you’re adults.”

Agreeing with Hancock’s assessment, Sinise believes the community-building model is the way to bring wounded warrior’s home to decent housing and respect. His foundation has completed construction of 16 “smart homes” for catastrophically wounded vets, and will have 35 in progress or completion by the end of 2015, Wagasy told Friday’s gathering of supporters and media.

Hancock rolled his electric wheelchair into his new home. He was trailed by his son, Julius, who is now finishing fifth grade, and his daughter, Anastasia, who was an infant, when he was blasted, burned, and flown from Iraq to Germany, to months of surgeries and treatment at Brooke Army Medical Center in Texas.

“When she got to the hospital, his mother didn’t recognize him,” Wagasy recounted.

Hancock endured dozens of procedures and discarded a prosthesis for his left arm, preferring instead to train himself to use the remaining fingers of his right hand to maneuver the wheelchair toggle, laptop computers, and now, an iPad to control the environment of his new home.

“This is going to go a long way to help with my quality of life, and my independence,” Hancock said Friday, soon after hundreds of supporters, contributors, sponsors, donors and volunteer builders cheered, and sang “Happy Birthday,” with 8-year-old daughter Anastasia chorusing “Cha Cha Cha.”

“I’ll be able to help my dad,” fifth grader Julius said, darting in and out of the crowd, clad like his father, in a camouflage ball cap and t-shirt.

“This patriotic American military community … it’s something you don’t see,” Hancock told the group gathered Friday. “You guys basically did something that’s never been done, all the OATH students … mainly the community support was beyond what I expected, beyond what anybody expected. The community as a whole stepped up. I am really grateful for everything that everybody has done, and I just want to say ‘Thank You.’”

For the history teacher, Jamie Goodreau, who put in countless hours, nights and weekends with her husband, Michael, the event was summed up in two words that turned out to be accurate and concise: “Mission accomplished.”

“It was the young people who did this,” Goodreau said in an interview. “They had a vision to build a home for this one wounded warrior who touched their lives, and they did it.”