We all know that if Abraham Lincoln rose from the dead, he would grab a battle-ax and get back to... 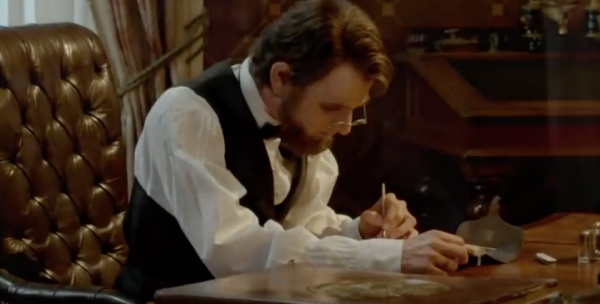 We all know that if Abraham Lincoln rose from the dead, he would grab a battle-ax and get back to work hunting vampires, because they killed his mother. But would he also take the time to pen a scathing letter to President Obama, critiquing his policy toward the tyrannical regime of Kim Jong Un? North Korea seems to think so.

Amounting to what may be the strangest, and dumbest, propaganda move in the history of the hermit kingdom, North Korea’s state media have composed an imaginary letter to Obama. It’s author: Abraham Lincoln, who served as the 16th president of the United States, and whose 150-year-old corpse currently resides at the Oak Ridge Cemetery in Springfield, Illinois.

Titled “Advice from Lincoln to Obama,” the letter imagines what Honest Abe would say to Obama if he rose from the grave and then defected to one of the most oppressive countries on Earth. It was posted only in Korean on “North Korea Today,” a state publication, on April 11.

“Hi there, Obama,” begins the letter in a guess-who’s-back-motherfucker kind of way. “I understand how perplexed you must feel nowadays, but I think this is the time for you to gather your thoughts as a president of a nation.”

The state of perplexity being alluded to here is not that of a man who’s just received a letter from a corpse, but rather that of a 21st century world leader who is in terrible need of foreign policy advice from a guy who died before the telephone was invented.

“A thought came to my mind to give you this advice when I saw you standing in front of my portrait deeply engaged in contemplation during your Easter prayer meeting,” continues the letter, which was published two weeks after Easter, suggesting that Honest Abe had been stewing on this for quite some time — and also that the White House is haunted by the ghosts of presidents past.

What follows is a presidential tongue-lashing that mocks Obama’s efforts to rid the world of nuclear arms by pointing out that the United States has yet to scale back its own nuclear arsenal.

“If the United States, a country with the world’s largest nuclear weapons stockpile, only pays lip service, like a parrot, and doesn’t do anything actively, it will be a mockery to the entire world,” says Lincoln, who apparently defected to North Korea because it’s a country where “the people are the owner.”

Then, in a surprising twist that will likely have historians scratching their heads for years to come, Honest Abe reveals that he was, in fact, dishonest. “Hey Obama, it’s the 21st Century,” the letter says. “The tactic by past American presidents, including me, who deceived the people…is outdated. That doesn’t work now. The world doesn’t trust an America that doesn’t take responsibility for what it says.”

The Lincoln letter is the latest response from Pyongyang to rising pressure from Washington to abandon its nuclear weapons program. North Korea is currently conducting its annual springtime military drill — or “invasion rehearsal” — which is set to end in late April. While such drills are intended to scare Washington into loosening tough sanctions on the hermit kingdom, North Korean Lincoln prefers a softer approach, appealing to Obama’s fierce sense of patriotism instead.

“If you consider me to represent the foundation and destiny of the United States of America and do not wish to forget me,” says the letter, “I hope you take my advice to heart.”