The Okinawans Treat Americans With Utmost Respect. We Need To Do The Same

“That cannot be right,” I thought after googling the command and realizing my husband’s new orders were to Okinawa, Japan.... 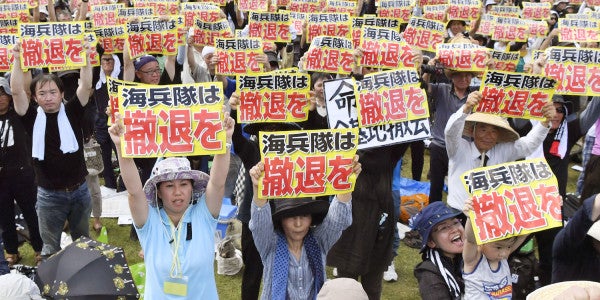 “That cannot be right,” I thought after googling the command and realizing my husband’s new orders were to Okinawa, Japan. He was deployed at the time, and moving to Japan was the last thing I expected. It was true. Five months later, we arrived at our new subtropical island home, bleary-eyed and curious about our upcoming experiences in the three years to come.

As we settled in, I immediately felt welcomed by the local Okinawan people. Okinawans treat us with hospitality and friendliness, and I enjoy interacting to the best of my ability with my freshly practiced Japanese phrases. When we take our two small children to the aquarium, for instance, they become a tourist attraction alongside the whale sharks. Cameras click away and eager elderly ladies squeal while squeezing chubby baby rolls. I’m fairly certain my youngest actually thinks her Japanese name is “kawaii,” meaning “cute,” and she probably also thinks she’s a celebrity. She really is, as they say, huge in Japan.

The Okinawan culture seems to emphasize respect and concern for others’ well-being and comfort. I’ve never felt more safe than I do here. Details are everything, from exquisite food presentation to intricate pedicure nail art. Essentially devoid of road rage, Okinawans rarely honk in traffic. It’s a peaceful place. One day, my expressway toll receipt blew away after I paid, and the man working the toll booth dove out, dramatically stopped traffic, and retrieved the receipt. He deeply bowed and apologized profusely as though he had caused irreparable harm. When someone asks me how I like Okinawa, my thoughts immediately turn to the overwhelmingly lovely local people.

I’ve often thought about how incredibly far U.S.-Japanese relations have come in the decades following World War II, when the island was largely destroyed in fierce battles and the two countries were mortal enemies. As a military family member living in Okinawa today, I feel welcomed in the community, but misconduct by U.S. troops and resulting protests threaten to further upset the relationship forged over half a century between Okinawans and Americans living on the island. It’s a delicate situation, and any negative incident has the potential to inflict significant damage with worldwide implications.

Anti-U.S. airbase demonstrators protest the U.S. Airbase relocation to Henoko in front of the Japanese Parliament in Tokyo, Japan on June 19, 2016.Sipa via AP Images

Recently, tensions have become increasingly palpable due to the vicious rape and murder of an Okinawan woman, Rina Shimabukuro, who was abducted while taking a walk on April 28. A Marine veteran — married to a local Okinawan woman and working as a contractor on base — is in police custody and has reportedly confessed. During the subsequent period of mourning implemented by American military leadership, the situation worsened when a Navy sailor was arrested for an alcohol-related crash resulting in injuries.

On an island with a low crime rate, news of such a heinous act committed by an American contractor perpetuates long-festering resentment among some Okinawans over the considerable American base presence in Okinawa. Protests are nothing new on the island, but current crimes remind residents of past atrocities, such as the 1995 rape of an Okinawan girl by three U.S. Marines. Controversy has long surrounded Marine Corps Air Station Futenma over aircraft noise, use of prime land in a populated area, and concern about safety. Relocation of the base to a less populated area to the north began, but construction has recently halted while policies are reevaluated. Protesters and Okinawan government officials cite environmental concerns among the reasons to stop the relocation and call for a complete removal of the base.

A recent series of conspicuous anti-base protests demonstrates the growing intolerance for any crime involving American personnel on the island. Some protesters, especially outside MCAS Futenma and Camp Schwab, attempt to stop vehicles from entering, but most protest peacefully. Anti-base Okinawa Governor Takeshi Onaga has sought reduction and removal of bases on the island, but Japanese Prime Minister Shinzo Abe supports the current security agreement and a strong alliance with the United States. Much of the debate focuses on the disproportionate share of bases on Okinawa compared to mainland Japan.

In response to crimes perpetrated by Americans and the associated protests, the U.S. military implemented a period of mourning, curtailed off-base drinking, and increased training. Black butterflies have been placed outside base gates to symbolize shared grieving and unity. The Navy temporarily instituted a complete ban on alcohol consumption by all sailors stationed in Japan following the sailor’s DUI arrest. President Obama expressed condolences and apologized following the murder, emphasizing the gravity of the situation.

In advance of a massive protest attended by tens of thousands of people in Naha on June 19, III MEF released a video on June 17 emphasizing the message, “we are a part of you,” intended to highlight the positive relationship U.S. military personnel and their families share with the local Okinawan people. Military leadership is making a considerable effort to preclude unbecoming behavior and criminal activity, though preventing all potential issues is an impossible task. Rarely shown in media coverage are stories featuring local supporters of the military community who stand near base gates with signs thanking U.S. troops.

Supporters of U.S. bases point to financial and security repercussions of an American exit. The rapid removal of all U.S. bases from Okinawa would lead to at least short-term financial trouble for sectors of the economy currently benefitting from military personnel spending and government contract revenue. American presence arguably serves as a deterrent, and military commands keep a close eye on North Korean activity and increasing Chinese assertiveness in the East China Sea. In addition, forward presence in Okinawa positions military resources to provide rapid humanitarian aid to countries in the region.

Opponents of bases in Okinawa suggest that Okinawa’s economy would rebound following base withdrawals and that Japan can and should be responsible for its own security and disaster response. Onaga argues that bases hinder economic development due to use of prime land and considers the disproportionate base presence on Okinawa compared to mainland Japan a burden to the local population.

Though the vast majority of Americans on Okinawa are law-abiding and respectful, the actions of few can unfortunately cast all in a negative light. Debates regarding bases will continue into the foreseeable future and all sides raise valid points. For now, despite increased tensions and growing protests over base presence, I have observed Okinawan people welcoming Americans into the community day to day and treating individuals with kindness and respect. I hope Okinawans can say the same about Americans regardless of future policy decisions as these issues continue to be debated.