This WWII Soldier Hid In A Philippine Jungle For 30 Years

World War II had been over for nearly three decades by the time Hiroo Onoda stopped fighting. An intelligence officer,... 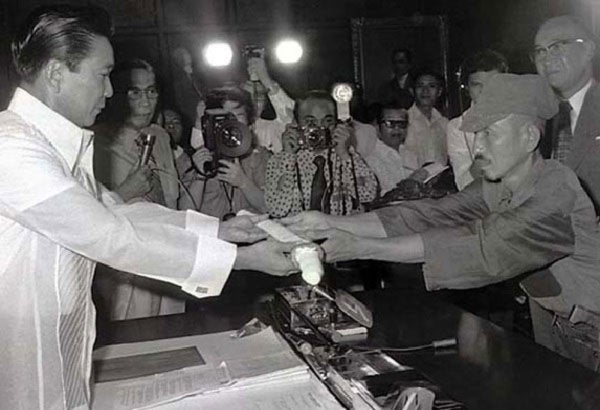 World War II had been over for nearly three decades by the time Hiroo Onoda stopped fighting.

An intelligence officer, Onoda was sent to the island of Lubang — a Philippine island south of Manila — to conduct guerilla warfare with three other soldiers in 1944.

At the behest of his commanding officers, Maj. Yoshimi Taniguchi and Gen. General Tomoyuki Yamashita, Onoda took his soldiers into the jungle. He would stay there until 1974. His original orders were to continue leading Pvt. Yūichi Akatsu, Cpl. Shōichi Shimada, and Pvt. 1st Class Kinshichi Kozuka for as long as it took Japan to win the war.

According to The New York Times, one of the last orders Onoda received was on Feb. 28, 1945, from Maj. Yoshimi Taniguchi, who told him stand and fight. “It may take three years, it may take five, but whatever happens we’ll come back for you,” the major said.

After nearly a year in the jungle, the first news of surrender came by way of local islanders who left behind a leaflet that read, “The war ended on August 15. Come down from the mountains,” according to “Military's Strangest Campaigns & Characters” by Tom Quinn.

Related: Read about the jolt of electricity that forever altered war.

Onoda ignored this, believing it to be illegitimate.

More official leaflets were airdropped toward the end of 1945. Though they were signed by Yamashita, Onoda and his soldiers believed them to be forged propaganda intended to draw them away from their mission.

In September 1949, Akatsu left the group. He then surrendered to Filipino troops in 1950.

Onoda, Kozuka, and Shimada’s families sent pleas assuring that the war was over in 1952, but the three continued to believe this was a trick.

As a result, they continued to fire at local police and potential rescuers, who were forced to fire back. These shootouts led to the deaths of Shimada in 1954, and Kozuka in 1972.

Onoda then spent two years alone before he was found by Norio Suzuki.

A college dropout traveling the world, Suzuki went looking for Onoda and found him after four days of searching.

Despite his ability to curry friendship with Onoda, Suzuki was not able to convince him to leave his post. Onoda said he was waiting on orders.

When he surrendered, he turned over 500 rounds of ammunition, his sword, his rifle, and a dagger that his mother had given him to end his life in case of capture.

He was pardoned by then-president Ferdinand Marcos for the deaths of locals and police, due to the fact that he still believed Japan was at war.

Onoda was greeted by his family and the rest of the nation as a hero.

He then went on to pen a book titled, “No Surrender: My Thirty-Year War.”

Of his will to survive, Onoda told the Australian Broadcasting Company in 2010, “Every Japanese soldier was prepared for death, but as an intelligence officer I was ordered to conduct guerrilla warfare and not to die. I had to follow my orders as I was a soldier.”

Having spent three decades in the jungle, Onoda was not prepared for all the progress his country had made. Where there were once farms and villages, instead stood cities and skyscrapers.

Seeking simplicity, he then moved to a Japanese community in Brazil and was married. However, he returned to Japan to open a school in 1984, calling it the Onoda Nature School.

He died in January 2014 from complications from pneumonia. He was 91 years old.