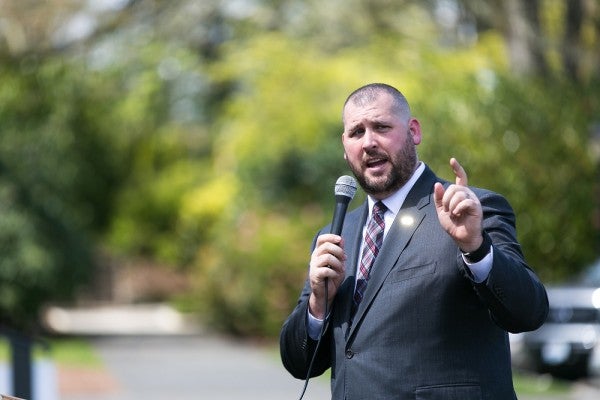 An altered photo and unverified claims of combat wounds, medals, and overseas service have landed Washington State Rep. Graham Hunt, a Republican from Orting, Washington, on a growing list of public figures accused of embellishing their military service.

A Jan. 24 feature on Hunt’s military career by The Seattle Times investigates Hunt’s claim that he is a combat veteran of the wars in Iraq and Afghanistan, and alleges that public remarks and social media posts made by Hunt and his staff may have exaggerated aspects of his military service.

The article calls into question Hunt’s claims that he was wounded in combat when he was “knocked down by explosions,” though he “cannot remember where” it happened. Among other things Hunt can’t recall are the dates he deployed, where exactly he was, and what units he was with.

Hunt is not the only public figure recently accused of embellishing aspects of, or an affiliation with, military service.

In November 2015, Republican presidential candidate Ben Carson took flak for comments he made about being offered a West Point scholarship as a result of his work in a high school Junior Reserve Officers Training Course. In January 2015, a news package from CBS showed Veteran Affairs Secretary Bob McDonald falsely claiming to have served in Special Forces. And in February 2015 news anchor Brian Williams was suspended from NBC after his claims to have been involved in a Helicopter crash during the 2003 Iraq Invasion were found to be false.

At a time when America’s military and its veterans are on the receiving end of unprecedented generosity and public support, touting an affiliation with that community can go a long way to boosting one’s credibility. But, it’s also a time of incredible access to information and there is the possibility that any comment, post, or statement made online may be stored somewhere. This means that if you say something untrue, by accident or not, it’s likely to come back and bite you in the ass.

This appears to be the case with a photo that ran on Hunt’s Facebook page in May 2014. The image depicted two service members kneeling in desert uniforms comforting each other, and ran with the following tagline:

“This picture of me was taken after a mortar attack in 2005,” read Hunt’s Facebook post. “Background has been modified, but I think combat camera captured the moment pretty well. I surely have not forgotten that moment.”

But, there’s a problem with that photo and caption. Hunt’s not in the picture, and it wasn’t taken in 2005 after a mortar attack.

The 2003 Associated Press photo shows David Borell and Brian Pacholski, two soldiers from Toledo, Ohio, according to the Toledo Blade. Additionally, the version of the photo on Hunt’s Facebook page was doctored, with the Army insignias removed and replaced with an Air Force staff sergeant’s rank — Hunt’s rank when he left the service. The image also included the phrase “knows the sacrifice” and the campaign slogan “still fighting for our country.”

Hunt said a campaign volunteer posted the image to his account, but declined to identify the individual to spare him or her from any embarrassment, but Hunt did say that he took “full responsibility for it,” according to The Seattle Times.

In addition to the Facebook image, Hunt allegedly removed references to several awards from his biography following his Seattle Times interview, including the Air Force Commendation Medal, the Iraq Campaign Medal, and the Afghanistan Campaign Medal. The Air Reserve Personnel Center told The Seattle Times that these medals do not appear on Hunt’s service record, but the records may not be up to date.

Hunt served in the Air National Guard from 1998 to 2005 and was based at Sky Harbor Air National Guard Base in Phoenix, according to Lt. Col. Belinda Petersen, a spokeswoman with the Air Reserve Personnel Center in Colorado, reported The Associated Press. From 2005 until 2010, he was a nonparticipating reservist, at which point he separated from the military. Currently, Hunt is the Washington state chairman for Ted Cruz’s presidential campaign.

Records obtained by The Seattle Times did not say whether Hunt was deployed to Iraq or Afghanistan, but did note that he served overseas in Saudi Arabia. The records also indicated that Hunt was deployed for a time to a classified location “in support of military operations.”

In response to The Seattle Times article, Hunt’s office released a statement on Jan. 23.

“I have been completely transparent with Mr. Brunner about my military service,” read the statement. “I am a combat veteran, and served my country overseas in multiple deployments to the Middle East, including to Iraq and Afghanistan. I am proud to have served this country honorably in the armed forces, and will continue to do so in my service as a state representative.”