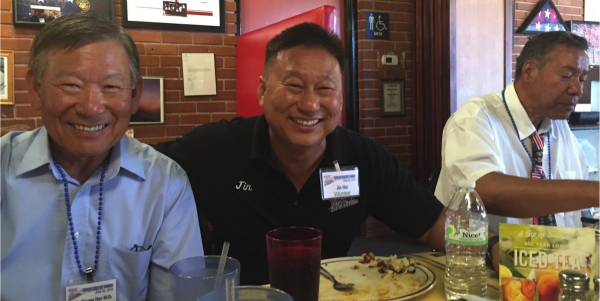 On June 25 — the 65th anniversary of North Korea’s invasion of its southern neighbor state — Dr. Young Hur, 73, traveled out from New Jersey to reunite with his younger brother, Jin Hur, in the Southern California city of Lancaster.

The Crazy Otto’s diner is also a crossroads for veterans of military service in this Mojave Desert city on the northernmost edge of Los Angeles County. Once owned by an Austrian immigrant accordion player named Otto Lindsel, the diner is famous for its holding a Guinness record for making the world’s largest omelette.

It’s also famous for the free feast that Hur puts on every year for veterans who served in the Korean War.

“Without them, my family would not have its freedom,” Jin Hur tells me. “Because of their sacrifice, my family has had the blessings of freedom and opportunity, in Korea, and here in the United States.”

Born nearly a decade after the close of the Korean War, Jin Hur reveres his older brother, a physician who served with Republic of Korea forces as a medical officer during the Vietnam War, when ROK forces were allies of the Americans who supported them during the Korean War.

“I was at the 5th field hospital in Tan Son Nhut,” Dr. Hur recalls. “We treated everyone. We treated military and Vietnamese alike. I treated many burns, and many wounds. It was serious.”

Restaurateur Hur also reveres the American troops who led a United Nations force to save his homeland from the North Korean invaders backed by China and supported by the Soviet Union in the 1950s.

For the past decade, Hur has opened his restaurant to Korean War veterans on the day that commemorates the start of the Korean War.

On Thursday, along with state Sen. Sharon Runner from the 21st senate district, dozens of Korean War veterans were honored with commemorative medals awarded by the Korean War Veterans Association on behalf of the South Korean government.

Like most Korean War veterans, Ed Warfield is at the threshold of his eighties. He beat the frigid winter and punishing heat that were base elements of the conflict on the Korean peninsula that took the lives of more than 30,000 Americans in fierce fighting waged for three years.

Warfield said, “I really don’t feel that I did that much.”

Warfield was an Air Force aircraft mechanic servicing P-80 Shooting Stars, among the earliest of America’s operational fighter jets. Then came the F-86 Sabre jets that dueled with MiG 15 fighters above the Yalu River, the first jet-to-jet combat engagements.

The commemorative medals were awarded to old men whose youth was consumed in the fire of the early chapters of the Cold War; a war that ended in a stalemate. With an armistice signed on July 25, 1953, it has never really ended.

Juan Blanco, an Army paratrooper of Cold War service, volunteered to help with video and photography, and his wife, Atherine, helped the Hur family organize the meal for the veterans.

“The veterans wonder why the Hurs do this because they were not even born when the war happened,” Blanco explains. “The answer is simple. It is gratitude for the generosity of the Americans who served in the war.”

His father then pumped away on the pedals and rode off with his son, and the boy’s little sister, on a harrowing journey in full flight from the invading North Korean army.

Hur’s father managed to get his children to safety, then turned around, peddling back to retrieve his wife, and yet another son who was still a toddler.

“My little brother was too young to understand,” Dr. Hur says. “He was just told, ‘We are going on a trip.’”

Somehow, the Hur family survived the invasion intact, and found safety dozens of miles to the south of Seoul, seeking refuge with relatives. The family returned to a war-ravaged capital in Seoul after Gen. Douglas MacArthur used the U.S. Marines and Army troops to cut off the North Korean forces by landing at Inchon and retaking the city.

Dr. Hur completed his military service with the Republic of Korea, serving in Vietnam in 1968 during the height of the Tet Offensive. In 1971, he immigrated to the United States to study medicine at Columbia University in New York.

But he prevailed, as he did surviving the Korean War as a child, and the Vietnam War as a man.

“What I hope for is that there will eventually be reunification (of North and South) Korean,” Dr. Hur says. “There were wars that were supported by great powers, and I hope it may be that those same great powers apply pressure that will put the country back together again.”