American servicewomen have served their country and fought and died on the battlefield for more than two centuries. Nearly 200... 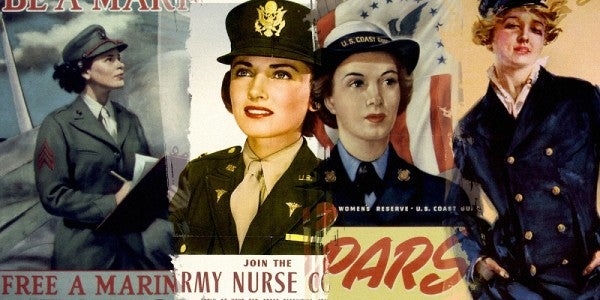 American servicewomen have served their country and fought and died on the battlefield for more than two centuries. Nearly 200 died in the wars in Iraq and Afghanistan, and numerous others have been acknowledged for their heroism and bravery under fire.

Since the armed services were founded, young Americans from across the country have taken oaths of service and enlistment to their respective branches. Women are no exception to this.

Before women were allowed to officially serve in uniform, some went to extreme lengths, hiding their gender in order to risk life and limb alongside their male countrymen.

Women have served in the U.S. military from the air, land, and sea; in active and reserve capacities; and from the front lines, and they’ve been doing it for years.

While the oldest military service does not officially state who the first woman to join its ranks was, most historians agree that it was Deborah Sampson.

An indentured servant, Sampson joined the Continental Army in May 1781 — though some reports place the year at 1782 — and because women were not permitted to serve in the military, she disguised herself as a man by the name of Robert Shurtleff. Sampson was injured multiple times, sustaining a sabre wound to her head and a gunshot wound to her thigh that she treated herself for fear that her secret would be discovered if she sought medical attention.

According to a 1975 Army Times story, after Sampson fell gravely ill, her attending physician, Dr. Binney, discovered her sex, but kept it a secret. However, her ruse would be short-lived. The doctor’s niece became enamored with the battle-tested young soldier, and not wanting to lead her on, Sampson wrote a revealing letter, which the woman’s uncle showed to the unit’s commanding officer.

Related: American women who served in Combat before you were born.

Gen. George Washington authorized her honorable discharge from the Army and she returned to her home in Massachusetts in 1784.

The first women to serve in the Navy belonged to the U.S. Navy Nurse Corps, which was established on May 13, 1908. The first 20 nurses earned the nickname “the sacred twenty,” and were assigned to duty at a naval hospital in Washington, D.C.

There, Esther Hasson, the superintendent, Lenah Higbee the chief nurse, and 18 other women rented a room — the Navy wouldn’t cover living expenses — and worked side by side tending to the wounded.

By the end of World War I, the ranks of the Navy Nurse Corps had increased to 1,386.

Ask any devil dog who the first female Marine was and he or she will immediately bark out the words “Opha Mae Johnson. 1918!”

In 1918, Josephus Daniels, the Secretary of the Navy, opened the Marine Corps Reserves to women for service in clerical roles, so battle-ready male Marines could be sent overseas.

By luck of the draw, Johnson was the first in line, among 300 other women, and became the first female Marine on August 13, 1918.

Staff Sgt. Esther Blake: was the first woman in the Air Force.Graphic via U.S. Air Force

Already a veteran of the Army Air Forces, Esther Blake was the first woman to enlist for regular Air Force duty when service within the newly founded branch was authorized for women on July 8, 1948.

Blake first enlisted in 1944 when the Air Force’s predecessor was still part of the Army, and once the Air Force became an independent branch, she remained on active duty until 1954.

Twin sisters Genevieve and Lucille Baker transferred from the Naval Coastal Defense Reserve to the Coast Guard during World War I and may have been the first women to serve in the service.U.S. Coast Guard photo

While women served the Coast Guard as far back as the 1830s as civilian lighthouse keepers, it wasn’t until World War I that they would wear the uniform of their service.

There’s some debate between historians as to whether or not the 19-year-old twin sisters Genevieve and Lucille Baker were the first women to join the Coast Guard, or if it was Myrtle R. Hazard, who became the service’s first female electrician on Jan. 21, 1918.

That same year, the Baker sisters came over to the Coast Guard from the Naval Coastal Defense Reserves, where they were previously serving. However, Hazard is the first woman to officially take the oath of enlistment for her service.

Ultimately, all three women are trailblazers, and whether or not one party is first over another due to a technicality should matter little.