In part one, I discussed the proposition advanced by David Barno and Nora Bensahel that a rigid and anachronistic personnel... 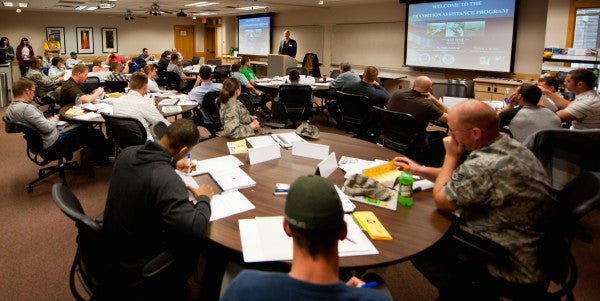 In part one, I discussed the proposition advanced by David Barno and Nora Bensahel that a rigid and anachronistic personnel system is inhibiting our ability to retain our most talented officers. I took issue with their apparent remedy: to give more perks and benefits to individuals who already enjoy substantial perks and benefits. Their analysis of the issue was logically inconsistent in that it identified requirements, but lamented those requirements when implemented. Their analysis was incomplete in that it did not consider opportunities to serve in our civilian workforce, did not consider whether talented officers whom we are losing are actually the most talented among their peers, and it ignored the reality that problems concerning family life, stability, and predictability are improving as deployments have become less frequent.

Instead of narrowly focusing on perceived shortcomings of our personnel system, we should take a broader view that also considers changes in our organizational culture. It is conceivable that focusing upon change in our organizational culture could achieve similar goals at far less cost in terms of funds and administrative burdens, and avoid the risk of turning the Department of Defense into a benefits agency instead of an institution serving society.

Barno and Bensahel make clear up front that their concerns about our junior officers’ treatment at the hands of the personnel system are based on their experiences and research. The research provided in their article is logically inconsistent and not comprehensive. As for experience, my first-hand observations are markedly different.

I served in the Army as an infantry officer in the active component and National Guard, with infantry, armor, and Special Forces units as a platoon leader, executive officer, and battalion staff officer, in peacekeeping, combat, and in garrison. I also served as a judge advocate, first as a trial counsel working directly with junior officers in infantry, cavalry, medical, and aviation units, and later as an attorney working with junior officers on the staff of a large headquarters. I think my finger is a bit nearer to the vein when checking the pulse of our junior officers. That is partly due to rank (I held these positions as a junior officer) and partly because as a lawyer I am often the guy to whom leaders feel they can gripe.

The most common complaints that I hear from junior officers pertain to a lack of purpose in garrison and the quality of their peers and superiors. With regard to control over one’s career, I hear (and share) more concern about promotions than assignments.

Our junior officers today chose to join a military that is at war. They sought purpose and a challenge. Many are disappointed to encounter the lack of purpose, and the absurdity, of garrison life. They are sick of administrative requirements that take up more time than training does and sick of training requirements imposed by regulation that bear no relationship to their wartime mission. The Army has acknowledged for over 10 years that it is somewhere between highly impractical and impossible to comply with the deluge of administrative requirements. Our junior officers, just like the rest of our troops, want to be training or fighting, not sitting at a computer making PowerPoint slides or wasting hours clicking through online training modules.

Junior officer dissatisfaction has less to do with our personnel system failing to put them in a better job and more to do with a crisis of bureaucratic dysfunction that makes many jobs miserable. Militaries have always been notorious for a disconnect between the wartime mission and administrative requirements. But our current crisis is particularly vexing. We have the technology and expertise to create enterprise systems to collect accurate and useful data, present it in a useful format, and do so relatively quickly and with minimal human input. But we lack the organizational ability to make this happen. So we pay highly educated and well-trained officers to sit in front of computers all day, inserting data into PowerPoint slides in a manner that often makes the data more difficult to understand. We pay multiple officers to unnecessarily duplicate the efforts of one another by independently submitting the same information through parallel channels, with much of it never being read. How do you get a sense of purpose out of that?

If there is an aspect of our personnel system that troubles junior officers, it is our evaluation system. Junior officers are frustrated with an evaluation system that makes it difficult for raters and senior raters to provide meaningful feedback on evaluations, to differentiate the great, average, and mediocre. The Army has revived a system for senior raters to identify the top 49% of their rated officers, but this system still holds great potential to be gamed. It remains to be seen how effective it will be.

Junior officers also perceive that many leaders outrank them, not due to greater capability or potential, but simply due to longevity and the high promotion rates of the last 10 years. Promotion rates for junior officers and field grade officers exceeded 90% in the last decade. Poor performers were able to clear that low bar alongside the average and high performers. Now those individuals, whether poor, average, or high performing, are in positions of authority over today’s junior officers.

My peers would no doubt appreciate more perks and benefits such as those recommended by Barno and Bensahel. Take a year or more off from work to attend graduate school with someone else footing the bill and/or paying your salary? What a great vacation. But if we want to address the issues that drive our junior officers out of the military, then we need to reexamine the right reasons that they joined and determine how the organization has lived up to their expectations or failed to do so.

It is easy to be cynical about a gigantic bureaucracy and nearly impossible to not be frustrated by it on a regular basis. I am far from an idealist. The last three books I read were “Flawed by Design,” “Bureaucracy,” and “The Spit-Shine Syndrome.” These reading choices were influenced by my frustrations with our bureaucracy and the lack of purpose that continues to fluster my peers. Yet I am optimistic about the way ahead that has been charted. Our personnel system is actually getting some things right. And positive changes are occurring in our organizational culture.

For years, the military’s problem has not been a “brain drain.” The problem has been retention of poor performers. In a counterinsurgency, killing one person may create multiple enemies. In a military organization, retaining one dud may demoralize multiple otherwise good officers. We can no more kill our way out of a counterinsurgency than we can spend our way to a smarter military.

As we draw down the number of service members in our military, our personnel systems are taking deliberate steps to identify the poor performers and separate them first. The first to go are individuals engaging in misconduct. What may have been forgiven in years past is no longer tolerated. Individuals with “bad paper” in their personnel files, such as nonjudicial punishment or reprimands, are the next to go. Those are the people who misbehaved or performed poorly in the past and were allowed to stay. Others are being selected for early separation or retirement because, despite staying out of trouble, they are not competitive for promotion.

There is renewed emphasis on physical fitness, raising standards, and improving readiness. The military is also becoming a more intellectually friendly environment. There is wider recognition after 15 years of war that achieving military and political objectives is much more complicated than just shooting bad guys and blowing stuff up. Today, we are a friendlier environment for soldier-scholars and unconventional thinkers than we were 15 years ago, despite our current flaws and duds. Officers who want to be part of an organization like that can increasingly find a welcome home in our military.

Many officers leave the service due to frustration with their peers and superiors. They are annoyed to serve beside those of equal or greater rank whom they perceived as less capable. But we continue to become a more selective, competitive, and smarter force, both due to personnel policies and shifts in organizational culture. This can feed the millennials’ desires for merit-driven, upward mobility. We will see greater esprit de corps as officers increasingly perceive that they are part of a specially selected and well-trained force.

The military personnel system must balance the needs of the services with the many individual desires of our personnel. No system is going to get that balance exactly right, and people are inevitably going to have some degree of dissatisfaction. No doubt most personnel can find something to complain about with our personnel system. But our junior officers today are already extremely well taken care of. Instead of focusing on individual desires for perks and benefits, we should be focused on reinvigorating the military to become a culture that high performers want to be a part of.

As Dr. Leonard Wong pointed out two years ago, paraphrasing then-Secretary of Defense Chuck Hagel, reducing the size of the force is an opportunity to “reestablish priorities and judiciously refocus” resources. It should not be our priority to outcompete the private sector when it comes to giving time off, facilitating graduate study, and ensuring greater work-life balance. Our priority should be to differentiate, offering what most organizations cannot: a service-oriented organizational culture, unique and challenging opportunities, and an appeal to a sense of purpose. We are on our way to doing that by weeding out our poor performers and embracing more independent thought. Ideally, these priorities would be complemented by refocusing our limited time and resources upon training related to our wartime mission, and reducing the deluge of administrative requirements that are often performed below standard due to lack of time available.

Our best hope of retaining the best talent lies in creating an organization that attracts the best talent and motivates them to want to serve the nation before themselves. You can only offer so many days off, assignments of choice, and educational opportunities before the military ceases to be a service and becomes a giant, self-licking ice cream cone. Our junior officers are better than that, and the society we serve deserves better.