10 Ways ‘Seinfeld’ Can Help You Explain The Military To Civilians

There is a theory, that every situation in life can be related to “Seinfeld,” the famous NBC sitcom about nothing.... 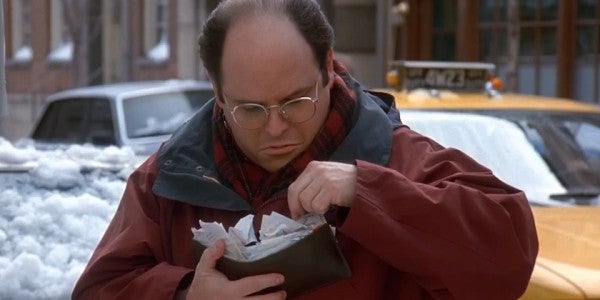 There is a theory, that every situation in life can be related to “Seinfeld,” the famous NBC sitcom about nothing. Late in the second decade of the 21st century, Seinfeld maintains its relevance in spite of some elements, such as the absence of cell phones, being a little dated. Culturally, “Seinfeldisms” remain pertinent. These are the phrases and descriptions that made their way into everyday American language. In the modern U.S. military, Seinfeldisms serve to describe many things, ranging from personalities of commanders to strategic planning and combat system acquisitions.

“Yada, yada, yada …” is an effective means of cutting a boring story short. Elaine successfully used this to gloss over her one-night stands. Unfortunately the yada, yada, yada, part is what most people are interested in.

Related: The American Way Of War As Told By 'The Big Lebowski' »

In the military, detailed planning is essential for all phases of an operation. Over the last 15 years we hope to have learned that we cannot “yada, yada, yada” phase IV operations. Indeed, “yada, yada, yada” may have been the concept of operations for much of the planning for the aftermath of the invasion of Iraq. The concept may have been: “Invade Iraq, yada, yada, yada … the locals will throw flowers at your feet and greet Americans as liberators.” Further, “Drive to Baghdad, overthrow the regime, fire the Iraqi Army, yada, yada, yada … Iraq is a peace-loving, fully functional democracy.” Though of course there's no concrete evidence, the results suggest this might have actually happened.

The Soup Nazi was a restaurateur who would scold people for not following proper procedures. Every military organization at the operational and strategic level has a Soup Nazi.

In the U.S. military, the formal name for the Soup Nazi is “Chief of Staff.” A chief of staff exercises coordinating staff responsibility over specialized staff officers. Moreover, chiefs of staff ensure the staff's battle rhythm meets the commander's needs. For an effective chief of staff, humiliating the disobedient is paramount. Fall out of line with the chief of staff, present a poor product to the general, and be prepared to be met with a “No soup for you! Come back in one year!” response.

George Costanza learned the hard way to never “double dip a chip.” Dipping a potato chip after taking a bite fills the dip with nasty germs unfit for human consumption. George, completely unaware of this social faux pas, double dips a chip, causing a ruckus at a funeral.

The United States has not learned the lessons of double dipping from George. If Iraq is the dip, and the U.S. military is the chip, putting in forces and leaving once should be enough. Yet since 1990 we have continued to dip the chip over and over again.

A low talker is an individual who quietly mumbles or speaks very softly, leading you in your confusion into agreeing to doing crazy things, such as wearing a puffy shirt on national television.

Over the course of a career, everyone has briefed a boss, a commander, or a flag officer in a large venue only to leave with unclear guidance thanks to the commander being a “low talker.” After you “Hooah!” or “Yes, sir!” the commander's unintelligible remarks, you discover you have just committed your section as the lead for the command's annual holiday party, never mind the fact you are trying to plan a war.

The Urban Sombrero was the idea for a hat to go on the front of the Peterman Catalogue. In spite of Elaine explaining that “It combines the spirit of old Mexico with a little big city panache,” it was a huge flop, and caused massive corporate financial losses.

In 2000, the Army purchased tens of thousands of Urban Sombreros from China, but referred to them as the black beret. Other Urban Sombrero analogs include the Army ombat Uniform, the Navy's digital blue working uniforms, and reflective belts.

George's wallet overflowed with so much junk that when George sat, the wallet in his back pocket made him tilt.

The military version of the Costanza Wallet is the rifleman's kit. It weighs well over 100 pounds, in spite of attempts to shrink it, because every new “lighter” piece of technology is met by an add on item. The excessive weight carried by the modern day infantry can include rifles, water, ammunition, mortar rounds, antitank weapons, radios, MREs, night vision, and body armor. Often, much more. As with the Costanza wallet, the cumulative effect of carrying these loads are men and women with plastic hips and lifelong back problems starting at the ripe old age of 30.

The Costanza desk doubles as both a workplace, and an effective hiding place for George to catch an hour's nap during the day.

While enlisted grunts bear the burdens of road marches with excessive weight on their backs, officers yearn for the Costanza Desk. Secret compartments underneath can store whiskey and other spirits to indulge in on a Thursday morning when enlisted soldiers are busy with “Sergeant's Time Training.”

The Summer of George

The “Summer of George” happened after he was fired by the New York Yankees and received three months' severance pay. George vowed to read an entire book, and to take time to play Frolf, neither of which came into fruition. The concept represents high expectations that ultimately are left unfulfilled.

Over the past 15 years, the United States has experienced numerous “Summers of George.” These high expectations that remain unfulfilled include future combat systems, effects-based operations, shock and awe, and net-centric warfare. The Summer of George applies to all services. The Summer of George is a useful concept for understanding the cost of weapons systems, or untested concepts rushed into practice.

Seinfeld used the term “re-gifter” to label someone who receives a crappy gift and passes it on to someone else.

In today's geopolitical environment, the Military-Industrial Complex is a re-gifter. Countless armies and militias throughout the world operate and fight on outdated U.S. equipment. Re-gifting does have advantages, as the Iranian Air force still operates F-4 Phantoms. The ability to turn off our re-gifting is strategic leverage applied to friends turned adversaries. A second example of re-gifting is the defense department's 1033 program, where surplus military equipment transferred to local police departments across the nation, a controversial law that President Obama limited with an executive order in 2015.

George and Susan made a visit to a very sick young man who lived his life in a bubble because of an immunodeficiency. The bubble boy was bitter, rude, and somewhat lacking in common courtesy, because of his protective bubble.

Needless to say, most in the military have worked for a boss like this at one point in their career. A high level commander so protected by his or her staff, that reality and relationships to common soldiers is a foreign idea. Quality staff officers and NCOs must consistently ensure that senior leaders take the time to get out of their “bubble” on occasion.

Seinfeldisms explain most, if not all of the situations we face while serving in the military. Relating a 90s television show about nothing to the intricacies of military life can be an effective way to explain it to our civilian counterparts

… Not that there's anything wrong with that!