Tim Kennedy may have ended his career beating people to pulp in the Octagon, but he’s got plenty of fight... 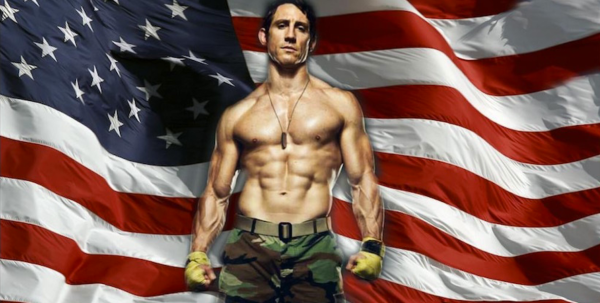 Tim Kennedy may have ended his career beating people to pulp in the Octagon, but he’s got plenty of fight left in him.

Speaking to Fox & Friends Weekend on Sunday, the U.S. Army Green Beret and former MMA fighter announced that he’s extended his Army contract to take the fight to ISIS — a decision, he says, inspired by the military’s apparent commitment to stamping out the terror network at all costs.

“The military, we’ve got our teeth back,” said Kennedy. “We have a reinvigorated, hopeful, beautiful military that is proud to be back on the team.”

Kennedy’s comments came days after the Pentagon’s decision to drop the GBU-43 Massive Ordnance Air Blast (MOAB), or “mother of all bombs,” on ISIS targets in Afghanistan’s Nangarhar Province last week, days after a Green Beret was killed by ISIS militants in the same region.

On Saturday, Kennedy posted a wild Instagram photo accompanied by a vow to take the pain to ISIS himself.

“There is a vengeance and wrath associated with the loss of one of our brothers,” he wrote. “May God have mercy on your soul because we are coming and we will have none to give.”

Kennedy praised the Pentagon’s aggressive approach to beating back ISIS across the Middle East,which he believes is a result of President Donald Trump’s appointment of strong military leaders Secretary of Defense James Mattis and National Security Adviser H.R. McMaster.

“I jumped out of a helicopter last weekend and raised my hand and said ‘I’ll protect our Constitution,’ ‘cause I got people who will back me now,” Kennedy said. “We are here to do work. We are here to win a war we’ve been fighting and just holding onto for 16 years, and that’s about to change.”

The 37-year-old middleweight announced his retirement from the UFC in January with an 18-6 record since 2001, citing his age. He’s been balancing his MMA career with his deployments as a Green Beret sniper in Afghanistan and Iraq since he joined the Army in 2004. During one of those deployments, he earned a Bronze Star with Valor.

But while the details of Kennedy’s new contract are unclear, based on his comments to Fox, he sounds more excited to pulverize ISIS than any foe he ever faced inside (or outside) the Octagon.

“They’re a bunch of cowards,” said Kennedy of ISIS. “When they go and kill one of my brothers, they have to know that the biggest bomb ever built is the least of their worries.”

Watch the full segment below: